Suspected firebug hobo hoist on his own petard 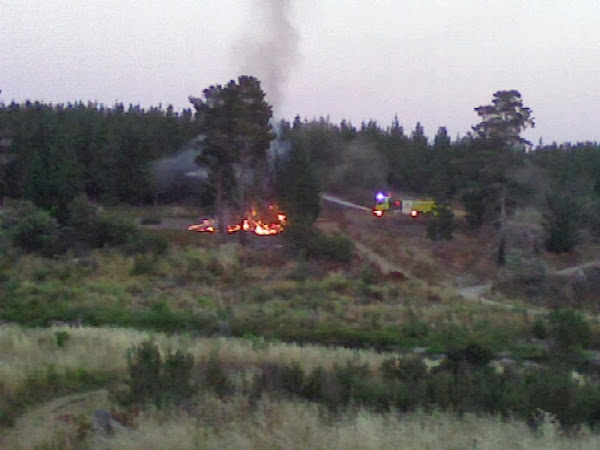 A 48 year-old man of no fixed abode has been airlifted to Concord Hospital after receiving serious burns in a suspicious fire in Molonglo early this morning (Thursday 16 January).

ACT Fire and Rescue and ACT Rural Fire Service attended a grass fire located in a pine forest near Tuggeranong Parkway and Lady Denman Drive after 5am this morning and extinguished the blaze at approximately 6.30am.

Police spoke to a number of witnesses on site and received reports of a man attempting to start a fire in the area. After a short search, police located the man who appeared to have suffered burns to his throat, chest and arms.

ACT Ambulance Service transported the man to The Canberra Hospital where he was treated. However, due to the seriousness of his injuries he was later transported to Sydney. Police will speak to the man in relation to two suspicious fires when his condition improves.

“About 12.30pm ACT Fire and Rescue along with ACT Rural Fire Service responded to a fire near Yarralumla Creek and extinguished the grass fire,” Sergeant Denley said.

“We are urging anyone with information on either fire to please call Crime Stoppers on 1800 333 000. The man always has his dog with him, a small white dog with black markings. If you recall seeing a man with a dog around the time of the fires, please contact us.”

Anyone with information regarding either of these incidents, who has not yet spoken to police is urged to contact Crime Stoppers on 1800 333 000 or via www.act.crimestoppers.com.au. Information can be provided anonymously.

Kenmore still exists in much-reduced form, but much nicer than the old buildings.

ACT has an equivalent (Brian Hennessy Rehabilitation Centre) but it probably isn’t big enough. Australian governments haven’t really cottoned on to this population growth thing – inexorable population growth means you need to continually expend your services. Increasing budgets with CPI each year doesn’t cut it – you also need to build in the population growth factor. There also a nice new forensic facility at Orange.

He may well end up in BHRC or Kenmore or Orange, or in an aged care facility (depending on the disabling extent of his injuries and ongoing mental health status and risk of repeat incidents).

Of course none of these places allow dogs. They’re not too keen on smoking either, which is a big disincentive for people to voluntarily stay there. I do hope this incident wasn’t contributed to by ACT Health’s ban on smoking.

Yes, unfortunately care in the community only works if the patient has a strong community of his own family and friends. Good luck to him!

Why is it that PC has made us blind to the fact that some individual’s mental state renders them unable to comply with social norms?

These unfortunates are forced onto the streets, when once the Kenmores of the world would have supplied a stable, ongoing existence.

But there are a few aspects to this story that hint an mental illness. So there might be scope for speculating about whether this gent should have been living on the streets, lighting fires, and whether there wasn’t something more that could have been done for him.

A situation that is unlikely to continue in the immediate future, given that he has allegedly acted in a way that amply shows he is a danger to himself and others.

This poor old bloke is well known around the traps. Back in the day he would have been housed in Kenmore or it’s local equivalent and been looked after as well as being less of a danger to himself and the general public. Now he is seriously hurt, and when he gets out of hospital he will face the courts and likely end up in gaol with all the other mentally ill.
This is known as saving a penny at the cost of a pound.

Sounds like the dog may have shown some good sense and split.

But there are a few aspects to this story that hint an mental illness. So there might be scope for speculating about whether this gent should have been living on the streets, lighting fires, and whether there wasn’t something more that could have been done for him.

No sympathy whatsoever. Has to be total moron to flick a lighter in these conditions, homeless or not.

I hope the dog is OK too!

Am I terrible for being concerned for the welfare of the little dog but not the man?

Jannah Fahiz - 3 hours ago
Oh my god. These comments are wild! Thank you for a good read RiotACT :) View
Michael Inglis - 3 hours ago
Do the vegans who willingly starve their own kids to death still have the moral high ground, or is that more of a grey area? View
Geoff Langridge - 4 hours ago
Dean Newman okay now youve just gone feelings over facts. View
Food & Wine 10

Chris Sherlock - 11 hours ago
Jorge Gatica i suppose you’re one of those people who thinks that road levies pay for roads. You know it all goes into the... View
Aloysius Devander Abercrombie - 11 hours ago
i think i get her point, something isnt perfect and theres some way its technically "not green" so bugger it lets all go back... View
Les Rice - 12 hours ago
Canberras electric is not 100% renewable....it was 100% renewable one afternoon a month ago for 2hours......The solar doesnt... View
Sport 7

Archie Mac - 18 hours ago
My uncle told me in climbed the fence as he couldn’t afford to pay. Said he walked in just in time to see Bradman walking o... View
show more show less
*Results are based on activity within last 7 days

@The_RiotACT @The_RiotACT
In this week's Probing the Polls, we're asking whether you think the ACT should have more consistent speed limits. Vote in our poll to have your say https://t.co/6xAEF1iEcC (6 hours ago)