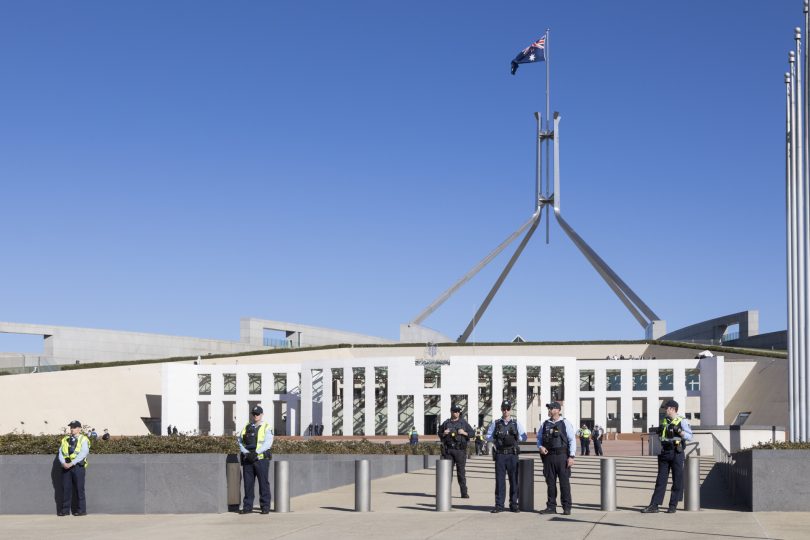 Police arrested a man outside Parliament House today after he repeatedly refused to comply with directions from officers. Photo: Michelle Kroll.

Police have charged a Sydney man with trespassing and breaching ACT health directions after he tried to enter Parliament House at around 12:40 pm today (7 July).

The 43-year-old did not comply with requests from police to wear a mask and apply for an exemption to be in the ACT, which has currently closed its borders to visitors from Greater Sydney.

The man was arrested and transported to the Watch House after lengthy discussions with police, an ACT Policing spokesperson said.

He is scheduled to appear in the ACT Magistrates Court tomorrow (8 July).

The spokesperson said that while police are generally pleased with the compliance in the ACT, officers would not hesitate to act in incidents of “blatant or deliberate non-compliance”.

Bummer – obviously Barnaby didn’t learn anything after the petrol station fine in Armidale ???

Sylvia Doherty - 6 hours ago
Amy MacMillen this is the talk that we went to that I was telling you about. View
Anne Brechin - 12 hours ago
I’m not convinced society as a whole wants to jail 11 year olds. View
Coralee Rauber - 12 hours ago
At age 11 the kids know better. The age should stay at 10 to be sentenced View
Community 92

Julie Macklin - 8 hours ago
Angie Carey Where? I can't see any posts on the footpath with signs in the photographs. On the wall yes, but is that an offic... View
Angie Carey - 8 hours ago
There is also footpath signage for this parking spot. View
Grant Burns - 9 hours ago
I’m no mathematician but as I see it there are 318,148 registered vehicles in the ACT (ABS Jan 2021), and according to the... View
News 10

John Dow - 8 hours ago
Still go down via Nerriga, but no road from Araluen still. The NSW roads website only mentions Brown Mountain and Kangaroo Va... View
Andre De Menezes Ribeiro - 9 hours ago
Thi Thai Hien Pham we just made it!... View
Community 165

Lisa Woods - 8 hours ago
This is appalling give him back his best mate he is a very kind and gentle dog everyone I've seen Patting him or talking to P... View
Nada Krstin - 9 hours ago
Craig Robinson Thank YOU for setting it up! I see good results, that Bruiser has been desexed and will be back with Paul soon... View
Sunny Jay - 13 hours ago
The dog needs to be under control at all times in public places where interaction with others can occur. On a leash is the be... View
Sport 2

HiddenDragon - 9 hours ago
"In the ACT, only a public service cleanout would make a dent on the market, and that is hardly going to happen when governme... View
Capital Retro - 12 hours ago
There is absolutely no incentive for people to downsize. The ideal requirement for downsizing seniors is a single level town... View
bj_ACT - 13 hours ago
I’m surprised you don’t think the price of land has risen much in the last year. One half of a sub divided block near me... View
News 1

Liam O'Toole - 9 hours ago
National Capital Authority ignored all submission put in against the redevelopment. It's the biggest waste of money and vanit... View
Community 4

John Moulis - 14 hours ago
I have to admit I liked watching the skateboarding especially when the Japanese boy sailed through and won the gold medal whi... View
show more show less
*Results are based on activity within last 7 days

Mandatory mask grace period ends, fines of up to $8000 apply

@The_RiotACT @The_RiotACT
Meet Asanka and Chatura, the first Sri Lankan leopard cubs born in Australia, at the @national_zoo in Canberra https://t.co/8NWrwRCTD1 (8 hours ago)

@The_RiotACT @The_RiotACT
Sophia Brady knuckled down and did her Wurst at the Harmonie German Club - Canberra's headquarters for hearty-food fans where pork knuckles and mega-schnitzels abound https://t.co/YFY9oVyxmM (9 hours ago)

@The_RiotACT @The_RiotACT
From the street, the award-winning 35 Negus Street in Watson will stop you in your tracks. But behind closed doors, it will take your breath away https://t.co/cXNZqMbJsP (10 hours ago)