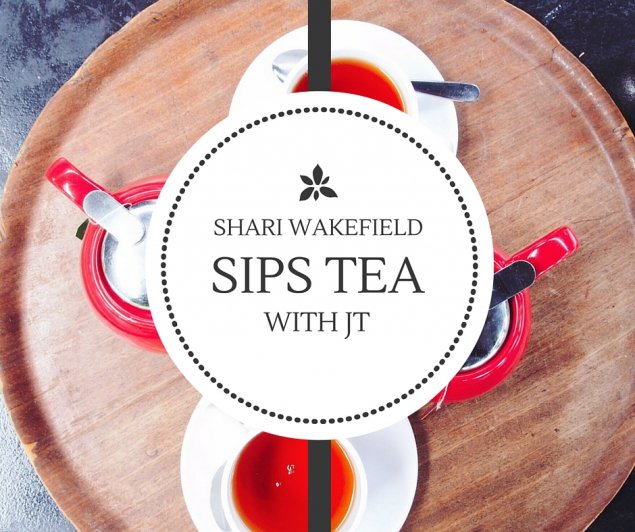 Hello, thank you for stumbling in on another episode of Tea with JT! This is a series where I get to introduce you to some of Canberra’s fascinating women. When I first met Shari Wakefield, I admit –I didn’t like her. I thought she was fast and pushy. But that is because we met on a netball court and we were playing for opposing teams! In some dead time, we broke the ice and got chatting. We discovered we were both bloggers and the rest is history. Don’t get me wrong, when my team plays her team on Monday nights at Southwell Park –we want to whoop their butts. But for the main part it’s great having this online wordsmith on my team. We sipped tea at Tilley’s in Lyneham. I hadn’t been there for yonks and I’d forgotten how great that place is!

Who are you?
My name is Shari and I am the mother of two, lover of one-pot-wonders, creator of delicious treats, drinker of tea {and the odd Campari and soda}, thrower of dinner parties, baker of birthday cakes. …Oh and hater of washing up!

What do you do?
At present, I am a stay at home mum and I blog over at GoodFoodWeek.

How long have you lived in Canberra for?
Originally from Sydney, I came to Canberra in 2004 to study a Bachelor of Communications – Public Relations at the University of Canberra. I lived on campus for three years, before graduating and moving in with my boyfriend {now husband}. We did long distance for a year or so in 2009 whilst I was working at The University of Sydney, but I moved back when we bought our first house in 2011 and have been here ever since.

You’ve been blogging before blogging was really a “thing”. Please tell us how your blog started?
Whilst I lived on campus, I often cooked for a few students who didn’t like cooking/didn’t really know much about cooking/were sick of eating mac and cheese {made from a box}. When I graduated, friends would often email me and say ‘I really felt like your potato, leak and bacon soup the other night, can you give me the recipe?’. And I thought that instead of emailing each person individually, I would just post them online for all to see. My earliest posts literally had no intro, said something like ‘Here is the Mossaman curry recipe that Taryn asked for’ and had no images. When I transferred my blog from Blogger to WordPress earlier this year, I lost some of these posts.

Have you always been a foodie?
Yep 🙂

You have two handsome boys. Do you think you will have any more?
All I ever wanted to be was a mummy. I was blessed with Mr Moo in 2013. We joke that it took Mr GoodFoodWeek seven years to propose and yet it only took me two weeks to fall pregnant {on our honeymoon}.

The Little Dude joined the crew in 2014. My boys are 17 months apart and, as many a random likes to tell me, I’ve got my hands full…but this definitely doesn’t mark the end of our family. I think we will probably have another two.

We met through fitness…. So I am going to ask, what are your fave ways to keep fit?
I love being part of a team. I played netball whilst I was pregnant with both boys until 24 weeks. I hate just running, but running on the court is something different – the name on the back of my team shirt is ‘pocket rocket’ picked my a bunch of ladies who no longer join us on the court, but are always ‘part of our team’.

I also love yoga. I attend yoga at Fitness First in Deakin – because the ladies who work in the creche are AWESOME. I think a lot of your fitness comes from mental fitness and I love that yoga gives me the opportunity to clear my head and focus on myself for an hour a week.

And I’ve always been a water baby so swimming is right up my alley too {although a little hard to do with two little boys with you}. I love the incidental exercise that you get from going to the beach and swimming in the ocean.

What is the best recipe to cook for young kids on your blog?
In an internet accident, I lost my recipes prior to July 2013 – almost anything you find on my website is family friendly – like these lime fish tacos, they always go down well with the little ones.

Where is your fave restaurant?
That’s a really tough one – I think that the Canberra foodie scene has really exploded in the last 6 months. I’d been to A.Baker on multiple occasions before they well and truly blew me away with their superb dining experience at Eat.Drink.Blog. A.Baker is a local produce restaurant and the producer of amazing artisan sourdough. We normally hit up A.Baker for breakfast – taking interstate guests and even choosing it as the destination to take the Little Dude’s Godparents when we asked if they would be his Godparents. I enjoy A.Baker for all it stands for and for the outstanding produce that they put on the plate. If you are a foodie and you haven’t hit up A.Baker I highly recommend it. Close runners up would include; EightySix, Elk & Pea, and Temporada.

If you could change one thing about Canberra for the better, what would it be?
I’d give it a beach – growing up in the Shire, my afternoons/weekends were spent at the beach and I miss that living in Canberra.

What makes you smile?
My babies 🙂

Are you still here or have you left to go look at those recipes? It is so great catching up with Shari and I am sure you can see why! I very much like ALL of her restaurant suggestions too!  A good foodie-bucket-list to start our 2016 year of eating off if you haven’t tried them yet.

My last Tea with JT was with Lisa Ridgley and you can read it here.

Karen Feng - 3 hours ago
I thought I'll share this. If you can try to leave some clean water out for creatures big and small. https://youtu.be/FYQQ1CI... View
Chanelle Fyve - 21 hours ago
Can they lend them out to backyard - I know the Canberra bee society puts them into people yards so they can have different v... View
Business 4

Peter Mackay - 19 hours ago
Sean Kinmonth Think about it. Self-driving vehicles are on Australian roads right now, and every year there are more of them... View
Sean Kinmonth - 23 hours ago
Peter Mackay do tell were your information for self driving cars being implemented before the trams are paid off comes from?... View
Maddison Farrawell - 1 day ago
https://youtu.be/17cxH9p-xps View
News 3