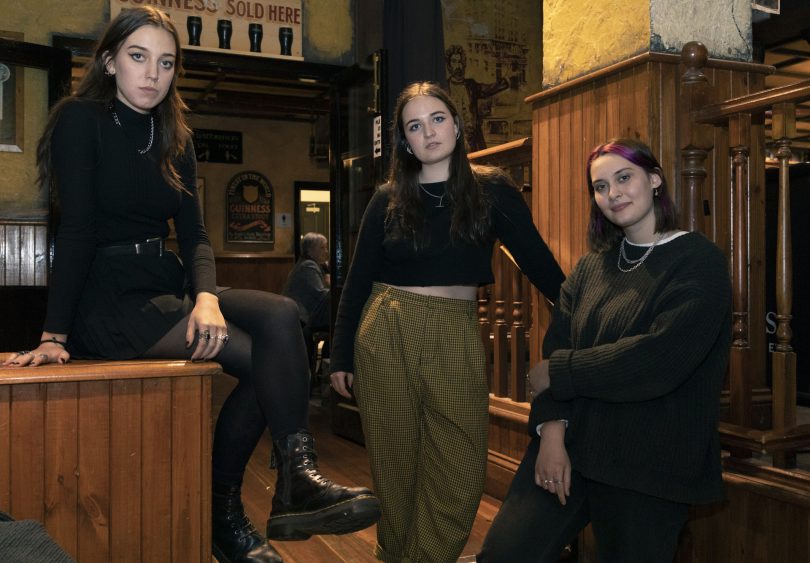 It started as a joke from Scarlet McKahey’s dad and his bandmates: “What’s the worst band name you can think of?”

Years later when it came time for Scarlett and high-school friends Neve van Boxsel, Jaida Stephenson and Anna Ryan to come up with a band name after a School of Rock session in Year 9, Scarlett remembered back to those bad band names and so Teen Jesus and the Jean Teasers was formed.

In the years since, the Canberra grunge rockers have played the stages of some of Australia’s biggest music festivals.

Throwing all of the equipment in the back of a Corolla in February this year, the band took off on their first headline tour with Hockey Dad and Last Dinosaurs. They didn’t get far. COVID-19 pumped the brakes.

“Since then we have been struggling to have motivation for a bit, going from touring every weekend to then being at home for months is a bit shit,” guitarist Scarlett said.

But the time at home has been productive.

“We have been focusing on writing a lot. We have a fair iso collection now but some are more successful than others,” according to drummer Neve.

And it is a collection that music lovers will be able to hear live at the Yours and Owls Festival in Wollongong next January as Teen Jesus has just been announced on the 2021 lineup. 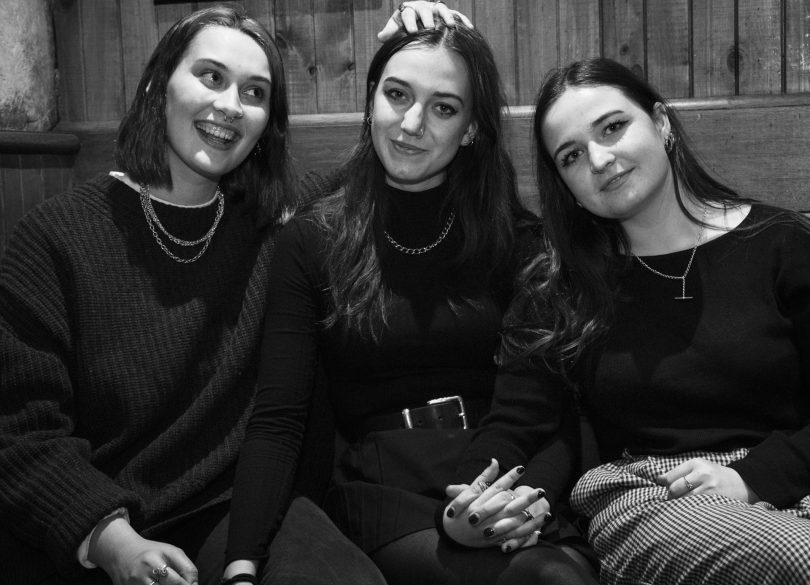 With the fourth band member, Jaida the bassist, now living in Melbourne, the girls were only able to fit in a few solid jam sessions together over the last few months, which is why winning one of triple j’s Level Up grants was so instrumental for the Teeny Jeanies.

“We are hoping to use the grant to get more studio time and to get our next project moving a bit more. We can finally start turning our little iso hobbies into something real we can put out there,” Anna, the vocalist, said.

But despite frequenting Melbourne for jam sessions and on their most recent tour (or “the big smoke”, as Anna said), the born-and-bred Canberrans have the country-town feel of the capital to thank for their success. 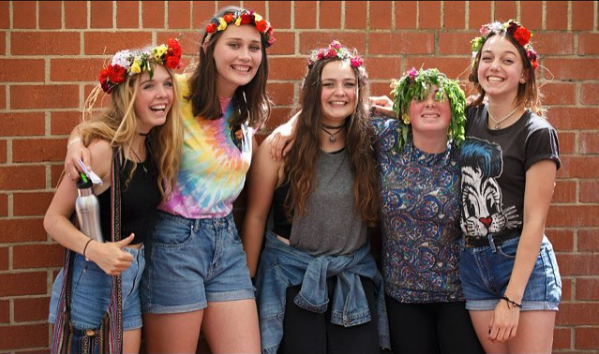 Teen Jesus and the Jean Teasers at their first gig back in 2015. Photo: Instagram.

“If we had started out in a city other than Canberra I don’t think we would still be doing this,” Neve said.

“I remember playing our first gig and being like ‘OMG that was the best show ever!’ but looking back at it, it was embarrassingly bad but everyone was just like ‘YES!’”

And in a music scene that basically acts as a supportive mother for local bands, the Canberra muso community is calling for help after months of having live shows, recordings and rehearsals cancelled because of the pandemic.

“The Canberra music scene has so many different people who contribute to all aspects of it. Obviously, artists will go and see other bands play which is really nice, but you always see the same people, even supporters,” Scarlett says.

AHHHHH!!! we have had the best time on our first ever headline tour!! thank you to everyone who came to a show, selling it out was a dreeaam ??? thank u @sptnkswthrt and @kitschen.boy for being our bestest friends, and every support band that played with us IT HAS BEEN THE BEST TIME OF OUR YOUNG LIVES n now it is time to sleep ???

A post shared by Teen Jesus & the Jean Teasers (@teenjesusandthejeanteasers) on Mar 7, 2020 at 5:08pm PST

“People in Canberra who come to every gig and support the artists and buy the merch, that is what the scene is, it is so much more than bands just being able to play.

“Please remember to support the bands and music scene, it is a bit shit for musicians at the moment not being able to do the only thing that we do so support however you can, buy some merch and try not to forget about them.”

Michelle Paul - 24 minutes ago
They probably have to keep wearing their ring until the show is over.To throw us all off. View
News 73

Julie Macklin - 36 minutes ago
Samuel Gordon-Stewart I'll try that next time. Thanks. View
Capital Retro - 3 hours ago
I can see the logic in what you say and thanks but this assumes that the person checking the others in knows who the others a... View
Samuel Gordon-Stewart - 4 hours ago
Julie Macklin With the NSW app, if you don’t have it installed, you can scan the code with your camera and be directed to a... View
Motoring 6

David Tickner - 2 hours ago
Alan Davey, sad but so true mate. So many whingers out there these days, with nothing better to do with their life unfortunat... View
Opinion 9

jorie1 - 3 hours ago
I support s.122 of the Constitution. You cannot just decide to change the Constitution because you feel like it. The people o... View
Andrew Turnbull - 4 hours ago
Paul Irving ok, now putting your own bigotry towards people of faith how about the actual issue itself. aside View
Rob Taglienti - 6 hours ago
Well said... View
Opinion 5

steve2020 - 4 hours ago
It's cross-cultural and inter-cultural collaboration. No different to many football teams or workplaces, for example. View
Kieran Livingstone - 5 hours ago
“What right do I have to answer such a question when I am steeped in white male privilege?” View
Maya123 - 5 hours ago
“Isn’t this a bit of a oxymoron… ur stating issues of Aboriginal culture while u have a all white band… seems ur just... View
Community 1

Ol L - 5 hours ago
Scary figures for these retrospective energy improvements. All homes September 2019- ‘The cost of the retrofits ranged betw... View
jorie1 - 6 hours ago
Well said @Acton. The price of the property dictates what you get. If you want to rent a 6 star energy efficient modern updat... View
jorie1 - 6 hours ago
I agree that a world view of housing should be to provide shelter first, and most houses in Australia do provide shelter. But... View
Opinion 12

JC - 6 hours ago
You could probably go back to Tuggeranong actually. And the reason is the design and the underlying principle that underpinne... View
News 2

Capital Retro - 7 hours ago
The workers should be in quarantine also. And why they are in a hotel is a mystery - they should be in a tent camp in the bus... View
News 22

Karen Feng - 7 hours ago
yes. current method seems to allow people to suffer till they die. My dad had cancer and he wanted to be euthanized. I was go... View
Opinion 27

Capital Retro - 7 hours ago
As well as being an apologist for the un-needed light rail, JC has also become a consultant for "Fix My Street" which is spon... View
Capital Retro - 7 hours ago
Well, it was pointless to replace one existing and successful mode of transport with another. The same "urban renewal" missio... View
show more show less
*Results are based on activity within last 7 days

Pet owners who had paid to bury their beloved animals at a pet cemetery at a property that has since...
News 28

When we first arrived in Canberra in 1995, my boys google-eyed at the grand entry down Northbourne Avenue - the...
News 72

@The_RiotACT @The_RiotACT
Dreaming of cocktails on the coast? A refreshed @CorrigansCove Resort in Batemans Bay could be the perfect spot for your next getaway https://t.co/2JGOZd9wkS (1 hour ago)