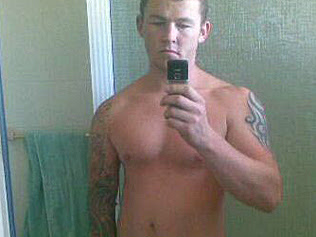 News.com is running a story about nude photos of ex Canberra Raider Todd Carney turning up on a mobile phone which was apparently rented from Telstra in Canberra about 6 months ago.

ED – Without the photo I’d have assumed this was an April Fools joke.

But here’s what Todd had to say:

Carney confirmed he had used a Nokia handset to take the explicit images of himself in front of the bathroom mirror while home alone late one night at his Goulburn home “about six months ago”.

The beleaguered player – sacked from the Canberra Raiders after a string of high-profile drunken misdemeanours said he had forwarded the photos to a girl he met on social network site Facebook some months later after she exchanged a lewd photograph of herself.

“She’d asked me to take them before … I don’t want to go back to that night though,” he said.

Carney said he was at a loss as to how the photos ended up on the handset, but speculated they may have been forwarded by an unknown person who picked up the Nokia handset he lost in January.

For the very brave or curious, News are running a slideshow of the pics.

i think he really just needs to grow up a bit and wow people still want to be with him after the pics that came out of him and the dog ???

That was Joel Monaghan, not Carney.

Carney is the guy that gets pissed, does burnouts, runs away from the police and pisses on patrons in clubs.

Monaghan, on the other hand….

i think he really just needs to grow up a bit and wow people still want to be with him after the pics that came out of him and the dog ???

Must have been a slow day in Goulburn.

I can’t say I have. Why you would even consider it is beyond me, you have absolutely no control over who they get sent to. Even if it is to your dearest loved one, people are stupid and forward them on, or break up with them and get revenge by posting them on the internet.

Sorry hek mobile phones with cameras didn’t exist when I was his age.

It’s hard to believe he is a rugby player with that body. He barely looks like he lifts.

Nonsense! Wiry, naturally athletic bodies can be super strong. Anyone would look like crap in the face in that light. He normally has quite a nice face. Oh, and men who carry on about small d*cks are usually “protestething too much”.

You couldn’t write better comedy. Pity he wasn’t the subject of a 7 up or Truman Show type show…………….hmmm perhaps he is and doesn’t know it.

… and what the HELL is his other hand doing?! Argh!

ugh, he is fugly. inside and out.

but i still want to see the uncensored pic…

At first I thought this was an April Fool’s Day joke and then I realised it was… of course… Carney.

What kind of a tool gets bored and takes nuddy photos of himself ? Oh… hang on… a small one !!

lmao! it just keeps getting better and better doesn’t it. poor carney, only a matter of time before he stuffs up again. maybe we should send him overseas next time.

Well, you know. Times are tough.

… Who sends nekkid pictures of himself to strangers on facebook. That is actually *really* sad. Isn’t that what the cheerleaders are for?

… with an incontinence problem!

… But I don’t want him for his brain …. Lucky because a zombie wanted it first. Just look for the skinny starving one!

He’s got fading patterns all over his arms. And look at the mental effort going into getting the mobile phone to do something… this is rocket surgery!

The head is nothing that a paper bag wouldn’t fix! Phwoar and stuff!

Julie Odegard-Forrest - 19 minutes ago
A friend for the cats Dana Odegard-Forrest!!! View
Maria Alcock - 12 hours ago
Genny she looks so much like rabbie View
Moira Begg - 14 hours ago
Kevin Begg Honey bunny please. We have a house View
News 5

Ben Garden - 20 hours ago
Matthew James exactly. That would be too inconvenient to admit science had anything to say on the matter though wouldn’t it... View
show more show less
*Results are based on activity within last 7 days

@The_RiotACT @The_RiotACT
After a long battle, we may finally know what Buckingham palace and HM the Queen thought about the Whitlam government's dismissal https://t.co/9hxZP5ozVN (36 minutes ago)

@The_RiotACT @The_RiotACT
Ready for a tree change? Want a modern country lifestyle? Walgrove in Yass is a charming retreat built in 1905 and it’s on the market now https://t.co/Or6WqNmuDq (3 hours ago)