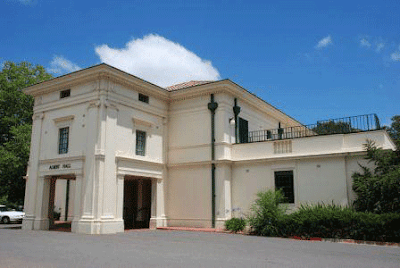 Mary Porter is celebrating the re-opening of the Albert Hall after years of ACT government neglect required a major refurbishment.

“In 1949 Albert Hall also witnessed the first ever Citizenship Ceremony and the new Australians were welcomed to their adopted country by Prime Minister Ben Chifley and Australia’s first Minister for Immigration, Arthur Calwell.

“Among the most famous artists to perform was Dame Joan Sutherland and Albert Hall has also hosted countless concerts, eisteddfods, plays and musicals and for many years was home to the Canberra Repertory Society.

“The refurbishment has been a major project and the Friends of Albert Hall have played a significant role in working with the ACT Government to restore Albert Hall to its original glory.

“The restoration work has included the retiling of the roof, repainting the interior and exterior, upgrading of the heating ventilation, air conditioning toilets and kitchen, and repolishing the floor, one of Canberra’s finest dancing surfaces.

RiotACT sources, however, are not at all impressed with the cowboy job done with the interior paintwork.

If you’re thinking about hiring the hall there’s a spiffy web page.

It would be nice if the website had a calendar giving dates it was/wasn’t booked for.

It’s a grand old building and I love it but it’s a shame it isn’t twice or three times as big, it would open it up to a greater variety of functions. As it is now, you could barely fit in a meeting of the Guatemalan swampland marsupials appreciation society!

Send me an application form at once …

Looks like a lovely restoration job on a beautiful building. Why, oh WHY, didn’t they install a caterers kitchen??

It’s a grand old building and I love it but it’s a shame it isn’t twice or three times as big, it would open it up to a greater variety of functions. As it is now, you could barely fit in a meeting of the Guatemalan swampland marsupials appreciation society!

I wonder if anyone remembers the caretaker, Ernie Sorenson, back in the 50’s and 60’s. He used to take the bookings, do the cleaning and keep an eye on the place. He used to live in a cottage at the back of the hall on the edge of the Royal Canberra Golf Course property.
It was also a great venue for school concerts, speech days, deb balls, office parties, wedding receptions, art shows etc etc.
It’s really good to see it restored to its former glory.

What’s wrong with the paintjob John Boy? Is it the colours or the quality?

A bit of both, but I haven’t inspected for myself.

Such a grand old building, it’s a pity we didn’t have more architecture like this around the place.

Steve Frame - 1 hour ago
Lisa Bishop if they don't pass the money they make from selling the tv rights and selling out stadiums to the players, the we... View
John Hynes - 1 hour ago
What rubbish. Its a business having difficulties just like a lot of other businesses. They will go back to spending what they... View
Nic Cortese - 2 hours ago
Wow. Look at all the battleaxes in the comments saying the players are paid too much 🤦‍♂️🤦‍♂️🤦‍♂️ View
Food & Wine 2

Leisa Doggett - 2 hours ago
Belinda Cox it’s such a worry- I’ve got one in Year 12 and one in first year uni! View
Amanda Russell - 2 hours ago
I have been talking to our wonderful teachers about this today and we are all coming to grips with it, this is not something... View
Josh Cockerill - 2 hours ago
Oh goody, can’t wait. Let’s hope for some good resources and support rather than a list of expensive, subscription-only a... View
Opinion 45

Isabella Goyne - 4 hours ago
Sweet this place *is* still around. I’ve driven past it but it always seems to be closed. View
News 37

Julie Macklin - 5 hours ago
They always take what I give them. It's clean and if clothes, washed and ironed, ready to hang on the rack, and still wearabl... View
Ashley Wright - 7 hours ago
David Klenka maybe because what you are bringing them is in realty crap and of no use to them. And by just leaving it for oth... View
Nicole Lee - 9 hours ago
I agree it's disgusting that people do this but removing the bins isn't going to stop this problem. So what is the government... View
Property 77

grim123 - 6 hours ago
And it shouldn't be up to landlords to subsidise the financial affairs of their tenants. Deferring rent is fine, but expectin... View
JS9 - 11 hours ago
Which is what I said..... a pause for the time being, until things get back to normal.... of course interest is accumulating... View
Property 5

@The_RiotACT @The_RiotACT
Expect more queues at Canberra supermarkets as they implement additional social distancing measures ahead of the Easter weekend https://t.co/gN4376iSdU (2 hours ago)

@The_RiotACT @The_RiotACT
It will be a brave new world for ACT public school students next term, with classes delivered online whether they are at home or not. Check out how it will work https://t.co/ep8sik0Rmf (4 hours ago)