The Big Bash is coming to Manuka in January 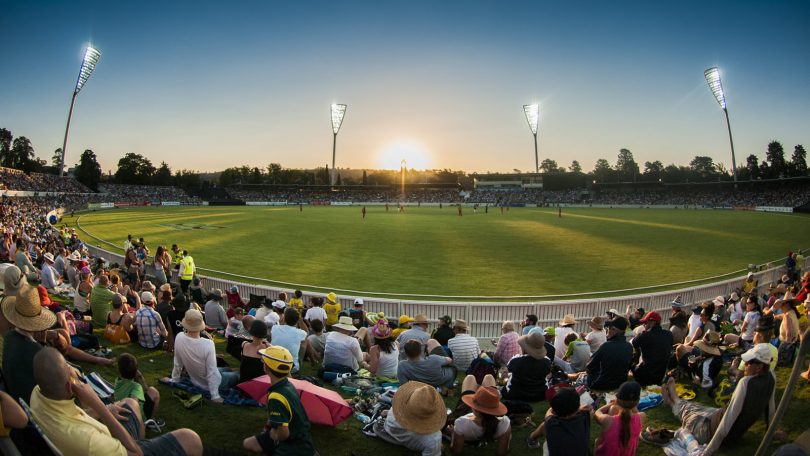 Big Bash cricket is coming to to the nation’s capital this summer.

The ACT Government has partnered with Cricket Australia and Cricket NSW to bring both the men’s and women’s team from the Sydney Thunder to play a regular season match against the Melbourne Renegades on Wednesday 24 January 2018 at Manuka Oval.

Minister for Sport and Recreation Yvette Berry said the Government was keen to work with Cricket Australia to ensure that there would be first class cricket at Manuka Oval this summer.

“It’s great to have both the popular BBL and the WBBL coming to Canberra to entertain local cricket fans,” she said.

She said the ACT would host its first Test cricket match in the 2018-19 summer, and having the 20-20 BBL and the WBBL in Canberra this summer was an ideal lead-up.

“It’s also great to have the Sydney Thunder women’s team play the Melbourne Renegades as part of a double header at Manuka Oval,” she said.

“I thank Cricket Australia, Cricket NSW and Cricket ACT for working with the Government to bring these matches to Canberra and I’m confident they will be a big success.”

She said the Government had demonstrated success hosting the Cricket World Cup, the Big Bash Final and regular international matches in the past, and was excited to bring the Big Bash League back to Canberra.

The game in Canberra will be the competition’s first visit to the nation’s capital since the 2014-15 final.

“This is designed to drive cricket’s strategy to ultimately continue to be Australia’s favourite sport and a sport for all Australians,” Cricket Australia events and leagues manager Anthony Everard said.

“A club-by-club approach has been taken to determine the most appropriate location to host this additional fixture, taking into account aspects including existing contractual obligations, participation and fan growth opportunities, and venue infrastructure.”

The BBL is considering the possible expansion of the league into regional centres in coming years.

Sydney Thunder General Manager Lee Germon said the club’s footprint in the area would be further strengthened by taking both BBL and WBBL action to the ACT and Regional NSW.

“ACT and regional NSW has been a focus and a key Thunder market since the inception of the club, with a large number of community initiatives already being held in the region.

“The opportunity to maintain the four BBL matches at Spotless Stadium while also taking a match to Canberra means we can continue to provide Thunder Big Bash matches to our loyal Spotless fans and also bring the Thunder match experience to our ACT community.

“It goes without saying that this match would not be possible without the support of the ACT Government, Visit Canberra and Cricket Australia.”

ACT Chief Minister Andrew Barr believes the fixtures would provide another example of the region’s passion for major sporting events.

“Our investment to bring world class cricket to Canberra on a regular basis has been well received by the community, and we were keen to ensure that Canberrans had an opportunity this summer to come out to Manuka Oval to watch some of the best cricket stars in the world,” he said.

For goodness’ sake! It’s one event! You make it sound like the walls of Jericho have fallen down. Sure, it’s a good start, but Canberra needs (and deserves) regular big fixtures like this.

chewy14 - 3 hours ago
Kenbehrens, "potentially safer". We are all "potentially safer" if we never leave the house either, but luckily most of us un... View
JC - 4 hours ago
Chewy in this instance it is NSW who is doing something different and did so without consulting or advising the ACT who is im... View
chewy14 - 4 hours ago
You do have to laugh at their statements about "being more comfortable" with further changes because of the high Vax rates. T... View
Opinion 85

jorie1 - 4 hours ago
Hi Assiduous, I do agree that $500 per week is a lot of money - but the majority of that money goes to the ACT government in... View
assiduous - 4 hours ago
$500 per week is not low - it is enough to build a modest detached family home every 10 years. It is a reflection of Australi... View
Peter Jovanovic - 6 hours ago
So if it all gets too hard for the parasitic landlords and their parasitism isn't as lucrative as they hoped they'll just dem... View
News 39

@the_riotact @The_RiotACT
Ready to get out and about after lockdown? Go for an adventure and check out the NewActon precinct's public #art trail around #restaurants and #cafes https://t.co/yUPQ0HaFq8 (60 minutes ago)