With COVID-19 restrictions easing, many Canberrans are returning to some kind of normal. Others are staring down the face of long-term unemployment and the flow-on impacts that come from this.

As we respond to the third major crisis of 2020 – an ongoing economic crisis – it is critical that we understand who is being most affected so we can act to ensure no one is left behind.

The Federal Government has optimistically spoken about an economic ‘snapback’. Yet we just learned that more than 6 million Australian workers (that is, around six out of every 10 private-sector workers) are accessing JobKeeper payments. 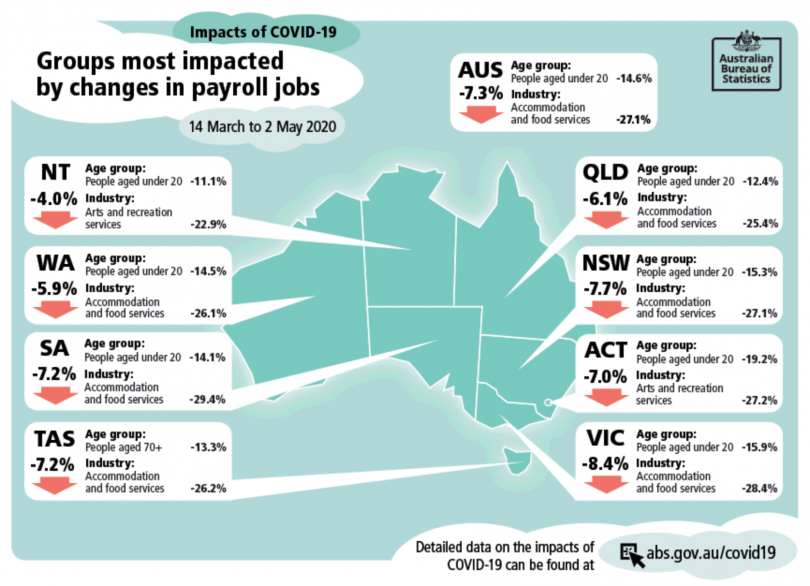 The ACT is relatively lucky. Many of us have established careers and permanent office-based jobs and this has meant that we have been insulated from some of the worst effects.

However, it’s a different story if you work in the entertainment or recreational services industries – more than a quarter of jobs in these industries have been lost from the ACT economy over the last three months.

The statistics are dramatic if you look at age-based impacts. The latest statistics from the ABS show the 7 per cent unemployment rate in the ACT is dominated by those under the age of 20. For this age group, payroll jobs have seen some of the greatest falls in the country – unemployment now site at around 20 per cent.

If you don’t have a job, you can’t pay rent. Even if people are able to get jobs as industries start opening back up, renters will have racked up debts during the restrictions as they have struggled to keep a roof over their heads. We should be alarmed by the challenges we face in ensuring everyone continues to have access to safe and secure housing in the wake of COVID-19.

While governments have moved to protect people who were affected by the economic impacts of COVID-19 through mechanisms such as a moratorium on rental evictions and land tax relief for landlords who dropped rents, it’s becoming clear that this will not be enough to ensure that people can continue to have a place to call home.

The looming nightmare for renters who have been able to negotiate rental deferrals was highlighted in the interim report released this week by the Legislative Assembly Select Committee which has been tasked with scrutinising the ACT Government’s response to COVID-19. It heard from a number of stakeholders that this is a key concern given low uptake in rental reductions but evidence of an uptake in rent deferrals.

The Committee heard that while rental payment deferrals have provided renters with some breathing space given the ban on evictions, it has just delayed a major crisis for these households. It means many tenants will come out of the crisis with significant debt, not helped by the fact that the ACT is the second most expensive city to rent privately in Australia.

It’s good to see that the ACT Government has responded to calls and funded a mediation service for private tenants and landlords. However, the issues raised in the Committee report highlight the need for urgent action to protect against economic disaster for some of our most vulnerable households as we move into a phase of economic recovery. This needs to prioritise ongoing support for these vulnerable households.

We need rules in place to ensure that people aren’t served with evictions due to these debts once the moratorium passes. We need to introduce fair processes to assist people to manage and clear these debts. We need protections in place to reduce the likelihood of this situation triggering a spiral into ongoing financial hardship.

Without political and community leadership, we could have been facing a situation of many more deaths, significant illness, and community trauma in addition to a devastated economy. It is a great relief that we have navigated this first phase of this crisis in a manner that provided support where it was most needed. Now it’s time for a new phase of political leadership that provides care and support to ensure that vulnerable groups are not left behind as we navigate this phase of the economic crisis.

I think the government needs to act to protect vulnerable renters who have been affected by COVID-19 as we move into this next phase of the economic crisis. What do you think would help people most to get back on their feet after the health crisis has passed?

Rebecca Vassarotti is an ACT Greens candidate for the seat of Kurrajong in the upcoming Territory election. She is the candidate spokesperson for housing.

“Australia is about to see a surge in unemployment……”

More like a tsunami. There is a generation of Australians about to wonder what hit them.

The Covid-19 health crisis is still in full swing, but people are acting as though people can no longer catch it and die. An unchecked second wave will do a hell of a lot of damage to the economy.

Here’s an idea for helping renters.

“We need rules in place to ensure that people aren’t served with evictions due to these debts once the moratorium passes. We need to introduce fair processes to assist people to manage and clear these debts. We need protections in place to reduce the likelihood of this situation triggering a spiral into ongoing financial hardship. “

This is true, but debt isn’t inevitable and more could be done to make sure that rents are affordable and renters don’t get into debt in the first place. Renters, workers, small businesses – everyone’s facing a hit to their income during this crisis. It’s unclear why property investors alone would be 100% insulated from any economic consequences.

You have referred to the subject situation as “The COVID-19 Economic Crisis”. The pandemic and the economic crisis are two separate things.

The world was already suffering from a growing ‘debt virus’ and the lockdown caused by Covid 19 metastasized the debt bubble into a solvency cancer.

No amount of additional money printing will save the situation and the government was wrong to cosset the newly created unemployed and give assistance to the business sector as this is more of “kicking the can down the road” and we will all be “biting the bullet” before Christmas because the economic problem is now insurmountable and the consequences for everyone will be unimaginable.