Houses might be more affordable to rent. Photo: Region Media.

Canberra’s notoriously tight residential rental market has eased slightly as short-term tenancies convert to longer leases, but a big fall in house rents is the surprise result in data released yesterday (13 May).

SQM Research’s monthly report on the rental market shows a blow-out in vacancies across the nation, except for Darwin.

Canberra’s vacancy rate increased from 0.9 per cent in March to 1.2 per cent in April, which still reflects a tight market, according to Independent’s Managing Director, Property Management Hannah Gill.

This compares with the national vacancy rate which rose from 2.0 per cent to 2.6 per cent in April 2020.

But the rate for Canberra’s CBD more than doubled to 4.6 per cent, reflecting similar surges in other capital city CBDs and holiday spots where the COVID-19 restrictions have played havoc with short-term properties including Airbnbs.

Sydney CBD recorded a record high 13.8 per cent while Melbourne increased to 7.6 per cent. Surfers Paradise blew out to 8.5 per cent and Noosa 6.8 per cent.

Ms Gill said the trend reported last month of short-term rentals converting to longer tenancies was continuing but the easing of restrictions had marked a resurgence in interest from tenants.

Independent’s recent release of the build-to-rent 107-unit Marquee development in Amaroo had prompted really strong enquiry and uptake, particularly as the developer was offering four weeks’ free rent under a one-year lease agreement and eight weeks’ free rent for a two-year deal.

”In the first week we had 17 tenants lined up for that,” Ms Gill said. ”What we will start to see, particularly now that open homes are back on the cards, is people who were waiting to see what would happen are going to start looking for a property more actively.”

For those seeking a house, they might find rents more affordable with SQM Research reporting a 3 per cent fall in the month to 12 May, and an average asking rent of $628 a week.

Ms Gill said that was surprising given there had been no increase in supply but agreed it could reflect a shift to the unit market which recorded a 0.6 per cent increase with an average asking rent of $466.

But Canberra remains the second most expensive place to rent in the nation, behind Sydney, which along with Melbourne and Perth recorded decreases in asking rents for both houses and units over the month.

Ms Gill said the ACT, compared with other states, seemed quite sheltered in the rental space, probably due to the large public sector workforce. 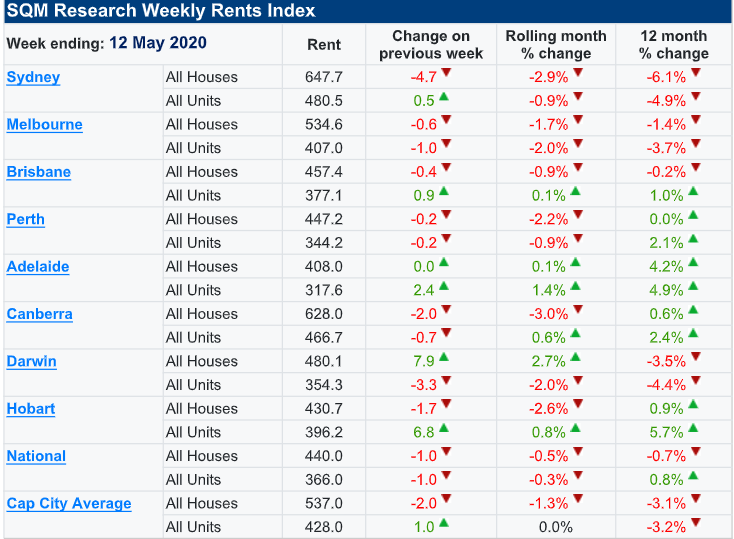 ”There was a period prior to JobKeeper when we were seeing a lot of enquiry and engagement from tenants who were suffering and needed support,” she said. ”But certainly, since JobKeeper coming through, we’ve seen enquiry levels drop off.”

Managing Director of SQM Research Louis Christopher said the April data included one of the largest one-month rises ever recorded in its vacancy rates series.

”The blow-out in rental vacancy rates for the major CBDs suggests a mass exodus of tenants occurred over the course of March and April,” he said.

”This might be attributed to the significant loss in employment in our CBDs plus the drop off in international students. We are well aware of a surge in short-term accommodation now being advertised for long-term leasing.”

If this continued then there could be far deeper falls in rents which would be good news for tenants but a disaster for landlords, Mr Christoper said

”There will also be economic consequences with further sharp falls in building approvals likely, thereby risking a major depression in our residential construction sector as well as the rather obvious risks for housing prices,” he said.