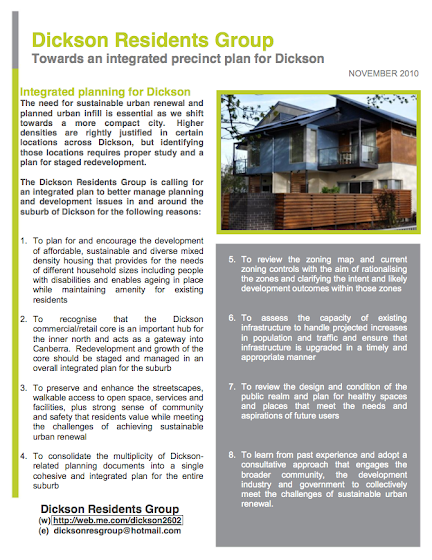 There they presented an eight point plan for Dickson.

The devil in planning lies in the details, particularly innocuous phrases like “enables ageing in place“.

But as a set of motherhood statements is there much to take issue with?

Stockdale st is an accident waiting to happen as well. You don’t realise how thin these old streets are until there are cars parked bumper to bumper all down one side, and there is not room for two other cars to pass.

Not helped either by the overly fast driving and erratic parking of all the P platers from Daramalan.

Turning at a T intersection is an added challenge when you are already in the middle of the road due to parked cars, and your line of sight in the street you are turning into is restricted by more parked cars.

I hope the new plans for Dickson shops included a serious parking structure. As Dickson becomes a bus hub, there will be ever more cars trying to park in these crowded little streets.

+1 to the first four comments. I am guessing that the average age of the contributors is well under 45.

the matter that most concerns me in the development plans in dickson – well, the bits i see most often – is street parking and its detrimental effect on safe traffic flows. moncrieff/dooring street up to and away from the abc end of dooring is a trap awaiting a seriously injured/killed victim before something gets done, methinks. now buses park near the new aria hotel right on a bend on what is a narrow street to start with.

is the drg advocating for action now on this?? one wonders why some of the developments were permitted without appropriate street furniture (admittedly the lights at wakefield are a boon) being installed as the development was being constructed or before…

Reads like any wanky public servant’s document to me.

Sort of have to agree with you on that, the 8 point plan seems mostly to be a lot of faffy BS with maybe 3 clear and intelligible points. The one thing that annoys me with the DRG is after going through their website, the 8 point plan, and reading numerous media publications, I still can’t figure out what specifically they want for Dickson, and what they have against the development plans proposed by the government.

If they are actually a reasonable group of residents with genuine concerns about how development will affect the infrastructure and amenity of the suburb, then they probably have some pretty good points to make.

If they represent the sort of people that JuleZ mentions, stuck in a 1980s suburban time bubble and vehemently opposed to any sort of development, then they really need to get out of everyone else’s way and go somewhere that isn’t an inner urban area of a growing capital city.

It sounds downright demeaning and highly offensive to me.

Not a bad initiative if it doesn’t become a front for self-interest groups wanting to retain their childhood surrounds at the expense of sensible urban renewal.

Boom boom. That’s the kicker, isn’t it? Most dickson residents get the need for urban renewal, so long as they see it in keeping with their suburb. From what I’ve seen from the DRG, even at their meeting (which I was lucky enough to have attended), those with complaints were basically along the lines of “why should we have to have any changes to our suburb at all ever, why can’t Canberra be the same as it was in 1990?” This was, mind you, from a small but vocal minority.

I think so long as both sides can keep it from decending into a farce, which it almost did (Marie Coterill said Mr Barr was responsible for turning generations against generations, though she said repeatedly that us young people would “understand when you’re older” which tbh is pretty inflamitory towards a generation who are staring down the barrel of $700k plus mortgages for the boxes they paid one twentieth that for), there is consensus to be made.

What is the problem with DRG? (rhetorical question there)
There are people in Downer who are more effected by Dickson’s constant motion than half the people in Dickson anyway

Reads like any wanky public servant’s document to me. Not as bad as some of the crap that EL1s and above spew out as a cover for their lack of ability to actually manage something though.

Not a bad initiative if it doesn’t become a front for self-interest groups wanting to retain their childhood surrounds at the expense of sensible urban renewal.

Robert Knight - 52 minutes ago
Jenny Gordon Avery it’s a great view up there! View
Archie Mac - 2 hours ago
It will always be MLC Tower to me. My family had the cleaning contract. We kids had great fun going up and down in the elevat... View
Nick Claydon - 6 hours ago
Sam L Oh it makes the food so tasty! View
Property 30

Paul Murray - 1 hour ago
Charles Godworth it’s coming from the Canberra Racing Club. They see the light rail as a great opportunity for them to make... View
David Rudland - 4 hours ago
Wow....really more units. I want to say so much but the words are expletives. View
Opinion 4

russianafroman - 1 hour ago
Great article. It's time the government starts addressing the basics and serving the people. View
salvatge - 4 hours ago
Excellent commentary, from a local expert with skin in the game! View
Mello - 6 hours ago
It is time to stop this self government experiment. We simply don't have the numbers to collect the revenue.... View
Community 39

Monica Tiffen - 2 hours ago
Here's hoping! View
Dylan McElhone - 3 hours ago
Claire McElhone sign me up haha View
Charles Godworth - 8 hours ago
But with global warming, they'll come back well before they're due and there will still be re-runs of Home and away on the bo... View
Food & Wine 8

A Belconnen GP surgery was forced into lockdown yesterday (21 January) over concerns that a patient had recently been to...
Opinion 199

Canberra Racing Club is finalising initial redevelopment plans for Thoroughbred Park in Lyneham that could include three to six-storey apartment...
News 25

@The_RiotACT @The_RiotACT
More than 25,000 Murray Cod have been released into Lake Ginninderra to improve the ecosystem. And they could be the catch of the day for anglers https://t.co/u5zdG677L9 (55 minutes ago)

@The_RiotACT @The_RiotACT
As nine Aboriginal nominees shared the Australian of the Year categories in 2021, what does it mean for them to be honoured on January 26? https://t.co/dDnrIpyGY6 (2 hours ago)

@The_RiotACT @The_RiotACT
More than 1000 Canberrans remain on the waiting list for home care packages despite government announcements of more packages to come https://t.co/Ap1Ar8jmtA (3 hours ago)