The koalas keep flowing in to Tidbinbilla! 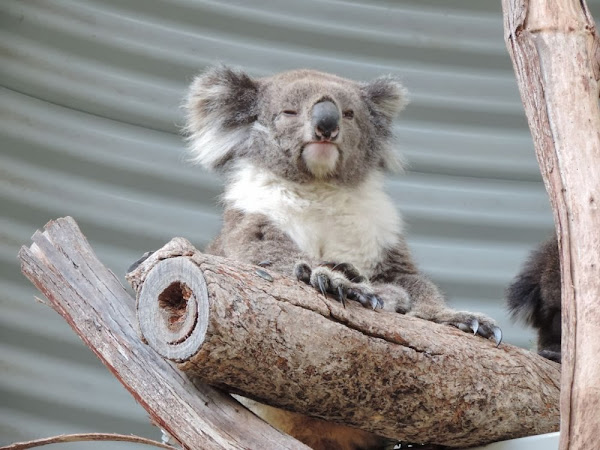 The grey tide rolls on with TAMS reporting on the six latest arrivals:

“Three female koalas and their three joeys (two females and one male) have joined the eight koalas that were released into Tidbinbilla’s Eucalypt Forest in November 2013,” Mr McNamara said.

“The three mums walked out of their carry crates and quickly scanned the environment before climbing up the closest tree with their young on back to take in the beautiful views and explore the selection of eucalypts on offer.

“At the moment the koalas are making themselves comfortable in their new home, and if they settle in as well as the previous new arrivals we will be very happy.

10 Responses to The koalas keep flowing in to Tidbinbilla!
Filter
Showing only Website comments

Looks as if he’s been munching weed.

Looks far too wasted to be sitting that high in a tree without a safety net being placed below.

“Wha? Did he just call us bears one more again?”

Looks as if he’s been munching weed.

Are the ACT Government going to let these ones burn to death as well, or do they have a proper fire hazard plan in place this time around?

Long may they live, flourish and piddle (in an amiable kind of way) on free-spending tourists.

Sarah Emmerson - 3 hours ago
I’ve been making them for free! $22 for an adult wow 😮 other friends made 100 for the hospital staff. View
Saskia White - 6 hours ago
Linda Gillespie it’s more about keeping your bugs on you and not sharing them around, as opposed to stopping you inhaling o... View
Linda Gillespie - 7 hours ago
Saskia White no they won’t, they are fashion not medical masks. Btw if someone has the virus they should be either in hospi... View
News 24

Caroline Le Couteur - 4 hours ago
Allready at Halal fruit and veggie shop in Mawson - but it is sad to need them View
Tracey Stevenson - 4 hours ago
Good for the workers!! View
Coralee Flood - 14 hours ago
Our chemist had them. Best idea. Hope Drs surgeries install them too. View
News 1

privatepete - 5 hours ago
I am a self funded retiree. I own outright one rental property from which I derive the majority of my income. If my tenant ca... View
News 22

Marina Rankin - 6 hours ago
Shan Weereratne you obviously don’t want nurses or doctors for your hospital then. A fair number of them travel into Camber... View
Shan Weereratne - 11 hours ago
Tegan Smith, I dont suggest completely denying NSW residents entry to the ACT but at least they should be subject to some for... View
Louise Flood - 15 hours ago
Darren Sault world health organisation world o meter has the daily numbers for Australia View
News 78

Josie Conlan - 10 hours ago
Well done what a wonderful effort View
Jennifer Kemp - 1 day ago
Well done and a big thank you to all involved! View
Lifestyle 3

Ann Gugler - 16 hours ago
I didn't know about the launch of the book, but certainly will keep an eye out for a copy when this madness of the virus sett... View
show more show less
*Results are based on activity within last 7 days

@The_RiotACT @The_RiotACT
COVID-19 is a hot topic, but it wasn't the only story making headlines this week. Here's our latest newsletter with all the articles that have had Canberrans talking https://t.co/8cScBmX6ZI (3 hours ago)

@The_RiotACT @The_RiotACT
Canberra’s distilleries are literally getting into the spirit by turning their products into hand sanitiser https://t.co/38n1qygKXM (4 hours ago)