The Near and How, now? 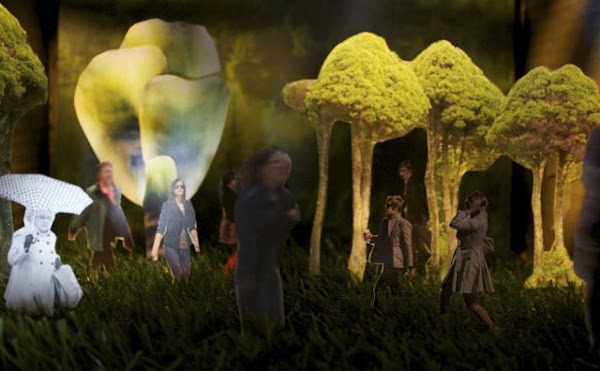 You may have heard the buzz about Canberra”s very own experimental arts Festival, You Are Here. Well, one very big and very special part of this year’s Festival is Ice Age – a series of over 20 theatre works, many created especially for the festival. You can read more about Ice Age and Jan Wawrzynczak, the inspiration behind the whole thing here. One of Jan’s passions was supporting young theatre makers and we got us plenty of those…

In the following interview, Adelaide Rief (YAH Coordinator) spoke to her good friend and animateur, Cathy Petocz a sprightly young theatre maker about one of her two Festival shows, The Near and How. If you’re reading to find out exactly what you’re going to see at The Near and How you’ll be disappointed, but fear not and read on, the answers like the show, are intriguing.

What is the show you’re doing for You Are Here?

It’s called The Near and How

And what is The Near and How? It sounds like a Doctor Seuss…

Yeah, Imogen (- Imogen Keen, Designer) came up with it. We like it because it’s a spoonerism of “the here and now”. We’ve been thinking a lot about intimacy and scale, but also the reversal of scale, so huge things becoming small and small things being like absurdly huge. It seemed really perfect because all my work is about figuring out how to be a person, and so The Near and How is about things that are close or maybe not so close and how intimacy works in a huge confounding world.

So what is this collaboration is like for you, a lot of give and take?

Yeah definitely, actually all we have done so far is have coffee and talked, and Imogen will scribble pictures in her notebook and I will write things and I’ve sent her the text and she’s sent me the images and shortly we’re going to meet and actually make the physical objects..I think I’m going to help which is exiting!

That sounds kind of fab! So has this show got any puppetry in it?

And what attracts you to puppetry?

Well for me its just the simplicity and just how amazing it is that an inanimate object can so easily become alive. That’s what puppetry is, these constructed things, which become so real and it so easy for people to believe that it’s a real thing, even if the puppetier is visible. People love it…they want to believe that it is alive. I think human beings have this instinct to see life in things, you know how you see faces everywhere in like nature.

A lot of your work seems to be very playful and wondering in that sense, do you feel like you’re always questioning things?

I just think I’m so confounded with the world, and people and relationships and so all my work is about complete surrender to the fact that everything is so unknowable, but never giving up trying to know it, so always trying to understand and ask questions and figure things out you know and explore things but not in a really angsty way, you know this sense of bewilderment but laughing because it is so crazy…like I’ll never know anything, and it’s hilarious and terrifying…but I totally accept that it can be hilarious and terrifying at the same time and I can exist in those two places, simultaneously.

You’ve been working on projects for other people a lot recently, but now you’re doing some of your own?

I feel like this is first time in while that I’ve been doing my own projects, I’ve been doing other people’s projects for a few years now, which is really great, because you know its such an honour to be involved in other peoples projects because I learn so much and it’s also not all on me, I’m just contributing. So working with companies like serious theatre and Boho Interactive have been the best and I’ve learnt so much and I’m so grateful to work with them…and I think I’ll be working with both this year, I’m just so honoured, like both companies have such intelligent interesting theatre makers.

And to finish – how do you feel about making new works as an emerging artist?

There’s always things I want to change…and I’m an emerging artist so I make so many mistakes and they are really obvious at the moment, because I’m in my early years of practice and I just have t take it on the chin and learn from it…and I’m really excited about learning…and so I take every opportunity to learn and grow and am really grateful for them.

You can catch The Near and How, during YAH on Sunday 17 March between 2pm and 4pm, and also on Tuesday 19 and Thursday 21 March between 5pm and 7pm at the Watchhouse. See the YAH program for more details.

MERC600 - 17 hours ago
Today the local paper today reports ''The number of patients in Canberra Hospital has dropped in the past day but three remai... View
me heretoday - 18 hours ago
I understand in times such as these that 'needs must' but in all honesty I do not want to die in a tent on Garran oval in the... View
1