The Necks @ The Street Theatre 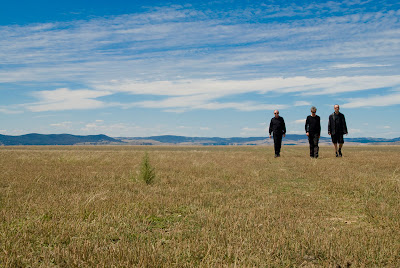 Legendary Australian improvisers The Necks are one of Australia’s most highly regarded musical ensembles. Critical acclaim worldwide reflects a growing realisation that these three Australians have created a way of making music unlike anything else.
Highly respected music writer Richard Williams, in his book The Blue Moment: Miles Davis’ Kind of Blue and the Remaking of Modern Music starts his discussion of The Necks by saying ‘the new music I would find it hardest to do without, fifty years after Kind of Blue, is that produced by The Necks.’

Long-term fans of this unique band come back time after time for their annual fix, as The Necks slowly conjure their sound mountains out of thin air, but if you haven’t heard them before, come along and check them out. You’ve never known two hours to pass so quickly.

The Necks play at The Street Theatre in Street One on Saturday Feb 27 @ 8pm.

damn being a new father – don’t think we’ll get there this year. d’oh. brilliant stuff – has to be seen live to be believed, though a recording will give you a sense of it, esp ‘townsville’, which was a gig (though with what and how they play, all their recordings are essentially ‘live’, innit)

and the street is actually a great venue to see them in – their soundscapes work wonderfully in that room, and it is a comfy place to sit and immerse yourself in their magic.

2902 - 43 minutes ago
Imagine the money one could make building apartments on this site, right out the front of the proposed light rail track View
ChrisinTurner - 1 hour ago
There is not enough attention to maintaining services in areas with dense populations. The government seems to be working on... View
JS9 - 3 hours ago
I assume there must be some form of contract that requires the pool to be maintained and provided to the community for a mini... View
News 4

Kathy Blunden - 1 hour ago
I was also totally shocked with my electricity bill. It is the highest bill I have ever received and I have solar panels!!!... View
JS9 - 1 hour ago
It is a weighted average across a range of plans - so it means some will go up more, some go up less. Over the basket of plan... View
phydeaux - 2 hours ago
I am surprised that the "11.95%" keeps being repeated without qualification. The following comparison uses data from "ACT Ele... View
News 12

Deborah Gale - 5 hours ago
Nada Krstin The vaccine gives protection and greatly reduce the likelihood of serious disease which is great. But children wh... View
Acton - 7 hours ago
We can’t hide from a virus and although vaccination mitigates the effect on yourself, it doesn’t stop you getting it, or... View
Peter Marshall - 7 hours ago
No Nada, that is not the point of the vaccines.... View
Courts & Crime 1

David Conrad - 7 hours ago
What is wrong with teaching cause and effect to kids? Or probability? So don’t fix it, just do what Canberra does best, put... View
Lifestyle 31

Katie Painter - 7 hours ago
But the fully Vaxxed rate is 93.3% in Eurobodalla, the second highest in NSW as of 25th Oct. And Bega Valley >95% first dose,... View
Monique Perry - 15 hours ago
Ilysha Perry not this article being recommended for me as if I'm not a local... View
News 2

@the_riotact @The_RiotACT
Fancy staying in an #historic sandstone residence in the Southern Tablelands with 60 rooms to choose from and no worries about security? Berrima #jail is up for #sale and it's attracting plenty of attention https://t.co/o36Cqikf1E (2 hours ago)