The Return of the Rafe! 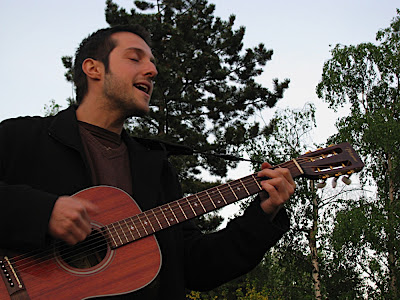 2009 has been a right bastard of a year. For mine a significant part of that has been the absence of Rafe Morris from our fair city.

Fortunately he’s sent out a media release to let us know that he’s coming back!

Having spent the past 19 months performing throughout Asia and Europe promoting his debut album “It’s Not As Sh*t As It Looks”, Rafe Morris returns to Canberra to share an intimate evening of quality original music.

On Saturday the 14th of November, from 7.30pm, The McGregor Hall (corner of Barry Drive and Marcus Clarke, Canberra City) will come alive with songs both serious and silly, never before performed in Australia.

Rafe, the lead singer of popular local dance band Dahahoo, began performing as a solo musician in 2006 and quickly developed a reputation for his well crafted and highly entertaining songs. This, combined with his charming stage presence, made him a favourite among the folk and comedy circuits in Canberra and throughout Australia, recruiting fans with performances at various festivals including The National Folk Festival, The Woodford Festival and Corinbank.

Rafe’s music has been likened to that of The Whitlams, Darren Hanlon and Tripod and has distinct Australian character and humour. His time overseas has seen his work mature and develop both musically and lyrically and he has returned to Australia with a backpack full of new songs that are rich with detail, painting beautiful landscapes, characters and situations with his words and sung with a great energy to an eclectic mix of music.

Rafe has performed in over 15 countries, playing for The Prime Minister and a 10,000 strong audience at a communist celebration in Laos, Bohemians in Bohemia and bourgeoisie in Paris.

A night not to be missed!

2 Responses to The Return of the Rafe!
Filter
Showing only Website comments

Effin blardy fantastic! Our city will be better for his return!

Glad to have him back, he’s a fantastic musician and a really top bloke. If you are in the area, I also highly recommend seeing him!

Jonny Ivan - 50 minutes ago
write this year off View
Joanne Mitchell - 3 hours ago
David Warwick and why did they remove the mask mandate two weeks before the first case while Sydney’s numbers were still cl... View
Callum Bowen - 5 hours ago
Completely agree with Simon. For years now we’ve turned a blind eye to thousands of annual flu deaths (and who knows from h... View
News 47

Simon Wheaton - 60 minutes ago
Guy Hosking Google Earth says 1073m. View
chewy14 - 10 hours ago
Astro, I asked for the evidence that Stage 2 of Light Rail was necessary and where the need has been proven from "Government... View
Lifestyle 5