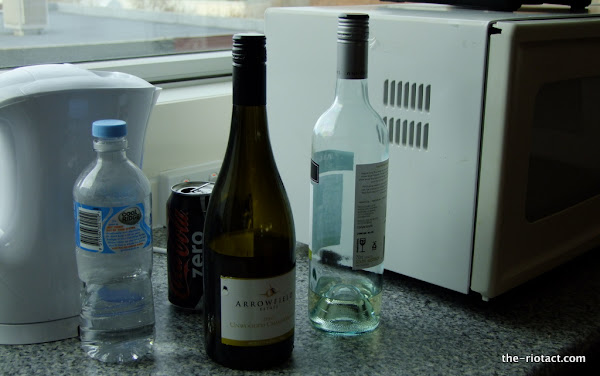 As noted last October the Responsible Service of Alcohol course is a farcical exercise of minimal value.

But even that’s a bit much to organise it seems.

We’ve come into the possession of a letter from the Commissioner for Fair Trading to the Liquor Industry Association Representatives pushing the RSA requirement date out another six months.

The commencement of the offence for failing to hold a RSA certificate was delayed twelve months from commencement of the Act to allow the industry time to develop the course content and to deliver it to in excess of an estimated 5,000 people working in the liquor industry and 500 licensees.

In response to industry concerns regarding the timeframe in which the RSA training will need to be obtained, the Attorney General has agreed to a further six month extension to the deadline by which RSA training must be completed. This will mean that all licensees (excluding influential persons of a corporation who do not supply liquor on the premises), all employees supplying liquor, and crowd controllers working at licensed premises will have until 1 June 2012 to complete an RSA course conducted by an ACT approved Registered Training Organisation (RTO).

Individuals who hold a RSA certificate issued after 1 December 2009 in any jurisdiction (including the ACT with an unapproved RTO) still have until 1 December 2012 to complete an ACT approved RSA course (which can be a refresher course).

I have recently written to all licensees within the ACT to notify them of the changed provisions and to inform them that should they wish to commence RSA training there are now RTOs approved for the ACT. As such, you may begin to receive enquiries from your members.

Well I didn’t think it was necessary to ban any particular drink but can I also ban Vienna short blacks? Or did you want some coffee with your cream?

At least they weren’t significantly expensive ones like Irish Babyccino.

Irish babyccino sounds like something I might have to order, then see if the staff blink an eye when I give it to a baby… 🙂

That’s not the RiotACT kitchen, that’s part of Johnboy’s desk!!!

Sadly deye is correct. II spent at least an hour tonight just fixing other people’s mistakes. At least they weren’t significantly expensive ones like Irish Babyccino.

Surely the RiotACT kitchen would have many more empties than what is in that photo…!

Bob Sekhon - 36 minutes ago
Our apology for the very delayed response. The Temple is open to all and anyone may attend when it is open. No special invita... View
Opinion 54

Tom Wills - 3 hours ago
Jorge Gatica Dont rent your house then, simple. Pay for it off your own back rather than the backs of tenants. Actually stick... View
jorie1 - 8 hours ago
Agree Realist. Landlords in the ACT are not treated fairly. I guess the proof is in the lack of rental properties available.... View
Rob - 8 hours ago
This article seems to misunderstand some basic investment concepts: “But the main reason for owning rental properties is no... View
News 31

Bob Foster - 6 hours ago
You had me till the 2nd sentence of your 2nd paragraph Gai Wil THEY need to realise that roads were built for cars etc, and a... View
Matt Flagget - 7 hours ago
Tony Siciliano yep, us too - gone. Born, raised and lived most of my life in Canberra but it’s green/left underbelly is rot... View
Ashley Wright - 9 hours ago
Jimbo Lambert apparently the issue was risk of hitting roo’s and other wildlife and people running off the side of the road... View
Lifestyle 31

erikah - 8 hours ago
Tahlia is one of the most intelligent 14 year olds I have ever met. She’s incredibly cautious when it comes to risk assessm... View
Property 10

Rob - 8 hours ago
You missed their best wine: the sparkling Shiraz. It is just magnificent and I think the only one in region. Worth the trip o... View
Community 25

Chris Durban - 9 hours ago
A warm welcome, my best wishes for their future lives here. I hope they settle in and find peace and happiness 🤗... View
Cheryl Clare Riordan - 10 hours ago
What a lovely photo of gratitude and relief .... View
Angela Jackson - 10 hours ago
It’s becoming more and more clear that the human race has yet to reach the stage of being an advanced civilisation. 😉 View
Sport 24

Sally Hopman - 11 hours ago
Happy ending to this story - although we discovered this piece wasn't worth enough to retire on, we discovered it was not a m... View
News 52

Jenni 'Gabrielle' McInnes - 12 hours ago
Excellent They should not be there and the idea of glorifying a feral species and protecting them under law is absolutely mad... View
Jenni 'Gabrielle' McInnes - 12 hours ago
Helen there are. Are you disputing the work professional scientists have done? What is your background in saying this?... View
show more show less
*Results are based on activity within last 7 days

@The_RiotACT @The_RiotACT
#Canberra author Dominic Cookman thought he would never find a #publisher for his debut #novel, but a UK company is releasing it on 28 November. Now his attention is turning to book number two, set in the ACT https://t.co/Hor9cATN8R (8 hours ago)

@The_RiotACT @The_RiotACT
Surveyor's Hill is another local treasure for #Canberra wine lovers. Matt Farrah has the lowdown on the family-run winery producing excellent #wines that are easy on the wallet https://t.co/3PAXJXnvPq (9 hours ago)

@The_RiotACT @The_RiotACT
Want to #buy into a new estate with big #blocks? Hamilton Rise at #Yass could be just what you're after with tree-lined streets, a park and a community precinct. Expressions of interest are being sought now ahead of the land release https://t.co/nN9iPOgf0D (10 hours ago)