The veil is lifted: Kokomo’s reopens as Wilma 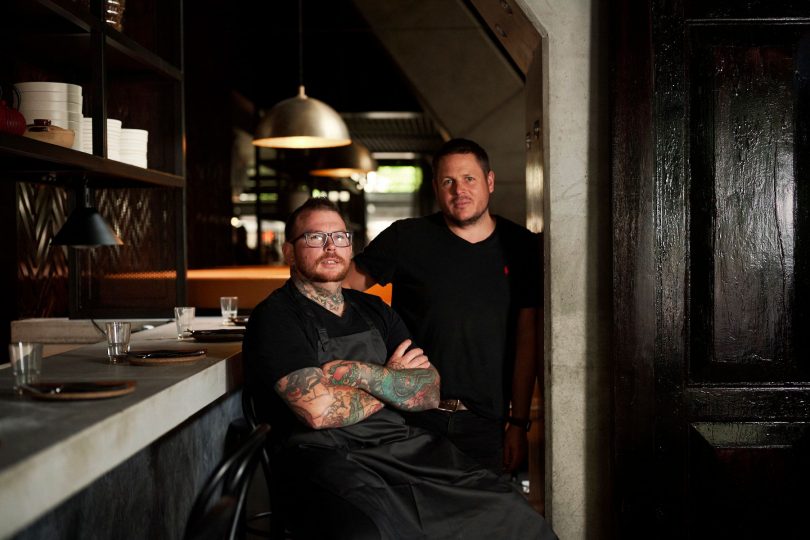 It’s official! Kokomo’s in Civic will reopen as Wilma for the first time tonight (3 December).

Described as a “progressive Asian barbeque restaurant”, Wilma is the latest project of HARVAC, Peter and Michael Harrington’s parent company for their venues Akiba, Sage Dining Rooms and Loquita.

Culinary director of HARVAC James Viles and head chef Brendan Hill will be fronting Wilma, with James proclaiming the pair are “pumped” to introduce the venue.

“Brendan’s put together a menu with a very primitive cooking technique, back to basics and cooking a lot over coals. Probably 80 per cent of the menu cooked directly over coals in a lot of different formats. From wood ovens to konro grills to hot smoking as well, and all with native Australian timbers,” James said.

“The flavour profiles are more along the lines of that Central Asia, China/Cantonese kind of thing, and it’s a large menu. It’s a large share format, casual-style menu with a live raw bar as well.”

The live raw bar will have chefs slicing sashimi and shucking oysters as diners watch on. 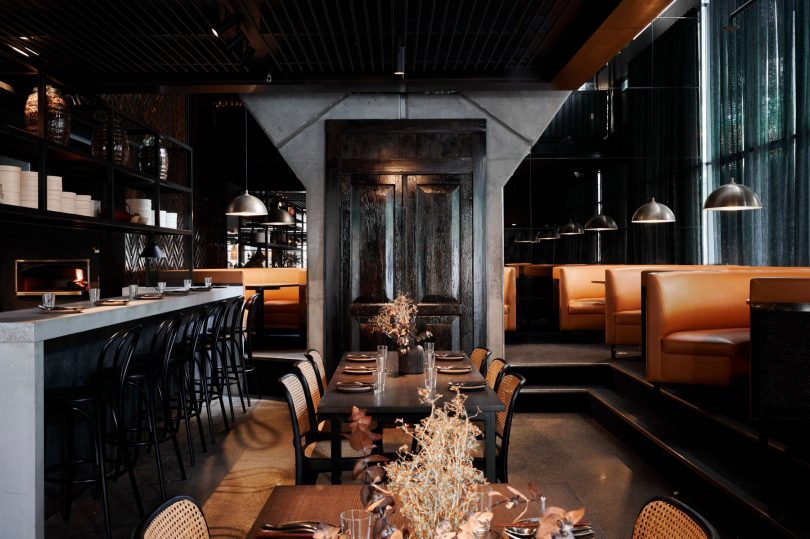 The venue will return with a sleek look. Photo: Ashley St George.

While this venue will be more of a restaurant than a bar, The Pearl will also be situated inside Wilma and will feature Asian-inspired cocktails such as an Osaka Old Fashioned and Lychee Dragonfruit Margarita, along with a bar menu featuring scallop prawn tartare, snag sanga and Wilma’s Emperor Tarts.

The 200-plus capacity restaurant has an enormous menu that they say is best experienced through one of the two banquet options.

To book, view the menu or make an enquiry, visit Wilma BBQ.

Go Toby. You get the award for most woke reader but I’m disappointed u didn’t use “privilege” in yr comments.

Fantastic! Look forward to checking it out !! Best wishes guys!!

I’m a concerned about white people calling asian cooking methods primitive, and i am extremely confused as to how central asian and cantonese food can be lumped together as ‘that kind of thing’. It’s not like we have a shortage of good, real asian food in canberra anyway. Interesting to see how this will go…

And I wondered why Sage had gone downhill recently. They’ve been bought out by these guys and the chef has moved on.

Jared Bentley yeah man gonna have to go check it out

Not sure this meets our 2022 snitty and a beer challenge. 😉Tracy Montgomery Will Tse

Emma Louise - 5 minutes ago
Vik Sundar didn’t you use to work here decades ago 🤔 View
Helen Kvalheim Stephenson - 16 minutes ago
We left in 2017. We were lucky. They were only looking after there own interest and charging exorbitant prices for that advis... View
Colin Parton - 16 minutes ago
Farhan Khaliq maybe. Lots of stories to tell. View
Opinion 59

Camille Martin - 41 minutes ago
Milenko-Slavenka Jovanovic then what is it to you either? View
HiddenDragon - 53 minutes ago
It would be easier to take seriously the federal government's utterly over-the-top reaction to Djokovic's stance on vaccinati... View
Greg Hollands - 59 minutes ago
How's the tennis going? View
Opinion 142

‘We need to talk’: fly-fishing program provides a hook for mental health

@the_riotact @The_RiotACT
Staff shortages due to COVID-19 are hitting every industry, including government services here in the ACT, with two #AccessCanberra service centres currently closed https://t.co/r9MnF3PXCY (34 minutes ago)