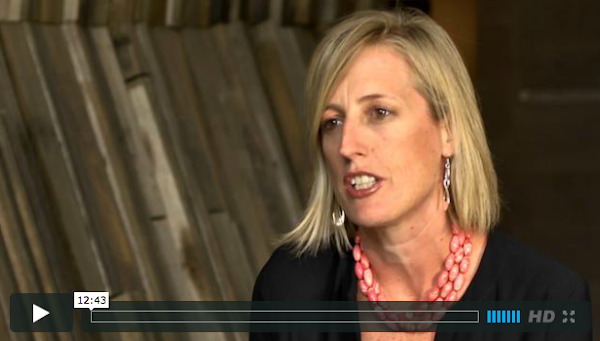 Chief MInister Gallagher’s blogging flirtation has taken a strange new turn as she shows herself off in slick videos locked down on Vimeo, the video buff’s preferred platform over YouTube (particularly when they don’t want something going viral).

Someone’s paid quite a bit of money to make things very few people are going to see, and then worded up their friends at the ABC.

Thanks for posting the video of the interview (video blog) with Chief Minister Katy Gallagher. It’s been a popular link on her blog today at http://www.katygallagher.net and we hope more people will take the time to tune in and listen to it to get to know her a little bit better.

I think you’ll agree that there are fewer and fewer oportunities to get to know public representatives through mainstream media and hopefully the more that people get to know Katy and Zed the better infromed they will be when they make a choice later this year about which team to vote for.

You mentioned that the video was “locked down”. I don’t think it is locked down at all, anyone can post and share it. It’s even been re-posted on the sydney morning herald website this morning and has been linked to by various people on Twitter and Facebook. It seems to play freely on all those sites.

Also, I have to say something about your incorrect reporting that it cost “quite a bit of money”. We had a few interruptions (technical, background noise and people making deliveries and driving past the location a couple of times) but it was filmed in less than half an hour with only one camera operator and volunteers writing and asking the questions. The editing was very straight forward as well and I estimate it was done in less than two hours including production. I estimate the whole thing cost less than $500.00, not including Katy’s time.

Julie Donda - 21 seconds ago
are you an expert in vaccines and viruses? Your misinformation based on Google research is not helpful.... View
Lucas Anasdow - 6 minutes ago
My problem with the vaccine is the the speed art which it has been synthesized ... 40 years and we are still waiting for a va... View
Rick Jackson - 24 minutes ago
Lucas Anasdow - ... because their immune system isn’t fully developed? Because they haven’t tested that group as extensiv... View
Community 36

Catherine McAndrew - 12 minutes ago
Lynnie Fletcher to keep partying just in case there are no parties on the other side View
Timothy Ingold - 2 hours ago
Michael Dolan what’s wrong with you? View
Ray Pemberton - 2 hours ago
Aidan Pemberton I'm good. View
Food & Wine 3

Toni Isaacson - 31 minutes ago
Not for social housing? Missed opportunity. View
Trevor Wilkins - 47 minutes ago
haha! Thats not a name I remember and I visited a lot of buildings in Woden. I'll ask my friend who worked in Vets Affairs if... View
Marco Spaccavento - 2 hours ago
Fiona Hall Yep, absolutely. Increase supply and help prices ease up. View
Community 3

Josh van Limbeek - 42 minutes ago
What a great article! My Mum is a Red Hatter and she has so much fun too ❤❤ View
Jo Jo Joey - 1 hour ago
Barbara Bennett, I love how much enjoyment your ‘red hatters’ gives you’ 🎈💜❤️💜 View
Property 27

Elroy Jones - 44 minutes ago
Peter Bee there are a lot of places it could go. Majura the most recent I’ve heard. View
Christopher Cuba Rabanal - 59 minutes ago
Better lighting around the carpark View
Andy Sell - 2 hours ago
2 words mate, lite rail View
News 17

Mookie Moo - 1 hour ago
Assuming this means 80% by Oct within the adult population only? Because roughly 20% of the population would still be kids, w... View
News 1

Theresa Rowan - 3 hours ago
Margaret Smith was in my class at St Clare's a gentle soul RIP. View
show more show less
*Results are based on activity within last 7 days

Who would have thought that Canberra's Nick Kyrgios would morph from tennis brat and national embarrassment to statesman of the...
Food & Wine 32

@The_RiotACT @The_RiotACT
Michelle Heyman's stunning return to football began with a simple question on Instagram: “Hands up if I should make a comeback to the W-League?" https://t.co/UNn8rDWuj3 (2 minutes ago)

@The_RiotACT @The_RiotACT
The 2021 Australian of the Year is Grace Tame. Grace is an outspoken advocate for survivors of sexual assault, particularly those abused in institutional settings https://t.co/Q6nMb1PGRL (17 minutes ago)

@The_RiotACT @The_RiotACT
Times have been ruff, so @QTCanberra has rolled out the pet-friendly red carpet & opened its doors to allow furry best friends in their luxury hotel rooms https://t.co/V89hSF18w9 (1 hour ago)