The Yarralumla Nursery and their slice of ANZAC history 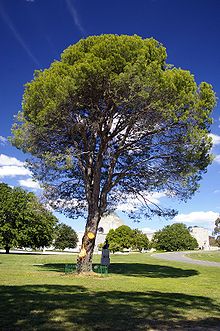 The focus of a media release by the ACT Territory and Municipal Services Directorate is, fittingly, the upcoming ANZAC Day. According to the release, Yarralumla Nursery have plants for sale with ties to Gallipoli- the Lone Pine, Gallipoli Rosemary and Gallipoli Rose.

The Lone Pine, which the Yarralumla Nursery has grown since 1950, has a particularly interesting link to the Gallipoli campaign.

The Lone Pine received its name in 1915 after the Turkish soldiers, in order to cover and line their trenches, cut down all but one of the Aleppo Pines (Pinus halepensis) that covered Plateau 400, which they were defending.

The area, aptly named Lone Pine Ridge, was the scene of some of the fiercest fighting in the Gallipoli campaign and the last tree was destroyed during battle. Following its capture after intense fighting and the loss of over 2000 Australian soldiers, Lance Corporal Benjamin Smith collected a pine cone.

Smith, whose brother was killed in the offensive, sent the cone to his mother in Inverell in NSW. She kept the cone for 13 years before planting its seeds. Two seedlings were grown. One was presented to the town of Inverell, while the Duke of Gloucester planted the second tree at the Australian War Memorial in 1934.

Sales from the Gallipoli Rosemary help support the Avenues of Honour 1915-2015 project, an initiative of Treenet, which aims to commemorate every individual who has fallen in the service of Australia with a tree.

Yes its true the Pinus Brutia is the “real lone pine” and try getting one of those. You can’t import the seeds because they pose a biohazard and I do hope all those who visit Gallipoli scrub the soles of their shoes to ensure they don’t sneak any seeds they may accidentally gather from around the Lone Pine site.
There is a Nursery in Victoria cashing in they are asking $400 for a 1.5m tall tree they claim was grown from the Pinus Brutia at the Shrine of Remembrance.

If you’re happy to go with an Aleppo Pine ( they weren’t growing at Lone Pine but the timber was used on site to shore up trenches etc) then you can get one for $20 from the Australian War Memorial on line shop you can have it mailed or pick up from Yarralumla Nursery.

They will grow well in Canberra are frost and drought tolerant and can be grown in a large tub or pot and make a fitting tribute to anyone who has an ANZAC connection. I’ve got one in memory of my Grandfather.
https://www.awm.gov.au/shop/lone-pine-seedlings/

Unfortunately this well meaning article is misleading. Or rather, there is an omission in the article that makes it misleading.

The 4th paragraph is written in a way that implies Cpl Smith collected a cone from the actual Lone Pine Tree, which he did not. His cone originated from a trench beam. DNA testing has shown that the trees descended from his cone are Pinus halepensis – a species not native to Gallipoli. So it is surmised that the beam was shipped in from elsewhere in the Mediterranean to build the fortification.

However, a cone was collected from the actual Lone Pine Tree itself by a Sgt McDowell and brought home to Australia. DNA testing shows that all trees descended from this cone are in fact Pinus brutia – the pine that is native to the Peninsula.

An article published in Australian Geographic, Oct 11 2011, refers to the study conducted on the subject: ‘Lone Pine: seeds grown into a living memorial’

The genuine tree (Pinus brutia) is far rarer and harder to source than the (Pinus halepensis) species distributed by large nurseries.
This inconvenient truth about ‘real Lone Pines’ (Pinus brutia), after which the ridge and battle site were named, would be significant to horticulturalists but would go over most people’s heads.