Three national awards in a row for Hotel Realm 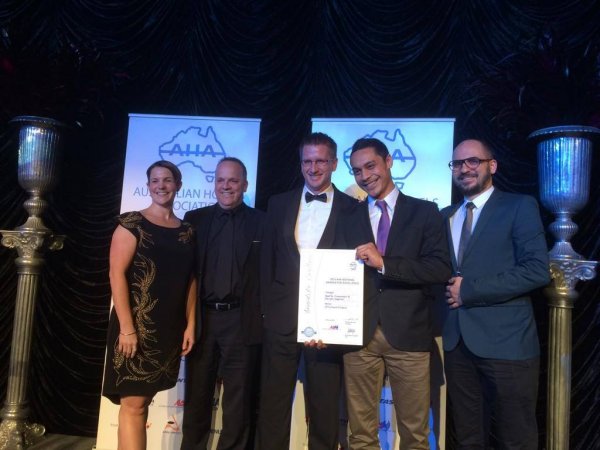 Hotel Realm, East Hotel and Lucky’s at QT Canberra beat their interstate counterparts to win National AHA Awards – with Hotel Realm winning Australia’s Best Meetings and Events Venue for the third year in a row – at a prestigious ceremony attended by more than 500 people at Jupiter’s Casino on the Gold Coast.

The leading ACT hotels and venues won their respective categories, including:

AHA ACT General Manager Brad Watts applauded these outstanding Canberra hospitality businesses who were a cut above the competition.

“To have hotels winning Awards for two and three years running is truly an outstanding and remarkable achievement.

“It confirms that the ACT is setting the standard for hospitality excellence across Australia.”

(Photo thanks to AHA)

Max Robinson - 14 minutes ago
My god. Who cares what people think about jail. It’s meant to be hard View
Sharee Schultz - 1 hour ago
Mark Huppert no, just don’t give them so much luxury for doing crimes! 🙄... View
Mark Huppert - 2 hours ago
Sharee Schultz Let the crims out then, I guess. View
Property 45

Jp Romano - 26 minutes ago
Margaret Welsh you’re wrong. Shadow me your facts.... View
Scott Lang - 3 hours ago
Allan AJ , perhaps you are right. But I'd be looking for something at half that price. Unlike the older generation, I have to... View
Scott Lang - 3 hours ago
I agree, Keiran. There are better designs out there, but our building industry's collective greed (and the apathy/incompetenc... View
Lifestyle 39

Phạm Quới-Chi - 12 hours ago
We spotted not just one , but three black cockatoos in Isabella Plains 😍 View
David Ironside - 16 hours ago
Tracey Ironside yes there a few around Fadden recently View
Sandy Gibbs - 16 hours ago
Kathy Little Suzy Obsivac these are the ones we saw on our walk today. Timely article!... View
Opinion 1

Jeremy Calero - 20 hours ago
Kaitlyn nothing will stop it lol View
O L - 21 hours ago
Wonder what that means for rental longer term? Probably go up after covid to match increase in housing values View
Community 12

O L - 21 hours ago
HECS gets paid only when you earn enough money to pay it back. What’s the problem with that? Fair system and I had no issue... View
News 6

O L - 21 hours ago
Great, that means little to no federal funding coming our way View
Annie Mills - 22 hours ago
Ben Winkler I have a sneaking suspicion that people in the bushfire affected areas are so desperate for the help they have be... View
Craig Griffiths - 23 hours ago
I've become convinced over the years that tabloid media have a psychological code in the messages they put out during electio... View
show more show less
*Results are based on activity within last 7 days

A new bus service is being trialled to connect isolated communities in the NSW Central West and NSW South West Slopes...
Lifestyle 39

@The_RiotACT @The_RiotACT
If the Canberra Liberals believe they can all wait until the election campaign to provide some policy detail or somehow skate through on vague promises and Mark Parton's social media skills, then that will be a shame, says Ian Bushnell https://t.co/FjgAod54Fw (1 hour ago)

@The_RiotACT @The_RiotACT
Claims of light rail contract mismanagement, disappointment for football fans & Soviet-style security cameras are just some of the featured stories in this week's RiotACT newsletter https://t.co/zoDivBOaVB (11 hours ago)