Time to change the jersey? Brumbies lose to the Lions at home. [with poll]

Foxsports has a stub to mark the historical low water mark of Brumbies rugby which occured tonight.

For context. The Lions are the side no one ever tips. They have won, until tonight, just one game in the last two years.

South African teams are notoriously bad travellers, and the Brumbies have traditionally been very good at home.

And yet we got beat, and quite handily.

Giteau’s haircut for his 100th game was spectacularly stupid.

Should we change the jersey so as not to bring dishonour onto teams past which played like they gave a damn about representing the ACT?

“We have just too many people and an organisation that makes too many soft decisions too often and now they’re the bulk and the norm, it’s in the wood now,” he said.

“We have been covering them for a while.”

Asked if the side could lift for their last five matches of the Super season, Rea replied: “No, no chance. 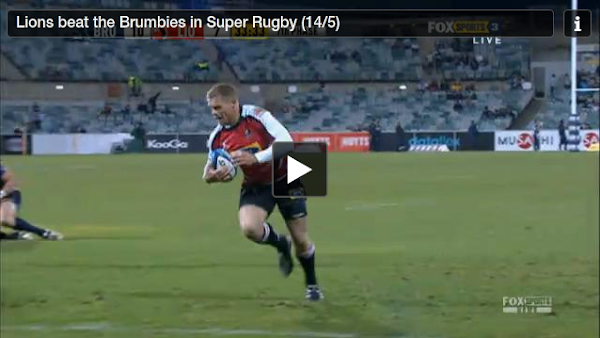 UPDATE: Green and Gold Rugby have a recording of Tony Rea giving it to the side and Matt Giteau’s reaction.

18 Responses to Time to change the jersey? Brumbies lose to the Lions at home. [with poll]
Filter
Showing only Website comments

Sadly I am blocked from hearing the recording. Any chance of putting an actual copy on TRA, not a link ?

From the comments I have read it looks like the rest of the season is going to be really ugly. how do you spell schadenfreude ?

Read plenty of comments that true fans won’t desert the team when they’re needed most. Ok, in theory a sellout crowd may lift the team. But in reality it’s both entertainment and a business. If the business is performing terribly then how can they expect people to invest by attending??

Sadly I am blocked from hearing the recording. Any chance of putting an actual copy on TRA, not a link ?

From the comments I have read it looks like the rest of the season is going to be really ugly. how do you spell schadenfreude ?

Fagan’s comments are interesting (see link below). Is he pretending he wasn’t in the firing line too?

Bad season for Brumbies supporters, but the first season in many a year that I, as a QLD Reds supporter, have been able to hold my head high.

The press world might be shocked at the comments from Sniffer, but he is only repeating what us fans and the whole rugby community have known for the past couple of months. Odds are Sniffer will lose his spot early because the spoiled brat pack didn’t like what he said. New coach is in town, so maybe he’ll be starting his tenure early – don’t like his chances to be able to do much if he isn’t going to get the backing of the brumbies board.

Here’s a tip for Fagen, he needs to speak to the players and get cracking on changing the culture at the Brumbies where the players simply have too much say. If he doesn’t, he won’t have much to be CEO of.

Fagan needs to do the respectable thing and throw in the towel. He said he took responsibility for the sacking, let’s see him do that. Major change starts at the top.

The ABC’s Tim Gavel has tweeted:

Now wouldn’t that be typical. Finally someone in the organisation has the intestinal fortitude to stand up and say the players aren’t up to it and the CEO says he will deal with the person that said it. No doubt the ‘players group’ that runs the club aren’t too happy about being called out. They need to toughen up in every sense of the word.

Here’s a tip for Fagen, he needs to speak to the players and get cracking on changing the culture at the Brumbies where the players simply have too much say. If he doesn’t, he won’t have much to be CEO of.

I am reminded of something George Smith once said in an interview when questioned as to why he was so good on the field and yet apparently one of the least fit players on the team. He said something like “I just never let the opposition know that i am tired, exhausted and feeling like quitting, eventually they give up first”.

It seems to be something that as a squad and organisation have forgotten.

[i]Asked if the side could lift for their last five matches of the Super season, Rea replied: “No, no chance.
“These blokes are not going to find something that is not there”[/i]

Just as well they sacked the coach, eh?

Andy Friend must be rolling around on the floor pissing himself.

He’d be the only one. Am I wrong or does this bode quite badly for any World Cup prospects?

Andy Friend must be rolling around on the floor pissing himself.

On the bright side, a lot of us now get to spend that $250+ we would have spent renewing our membership on something more fulfilling next year.

George Smith took the Brumbies’ heart with him when he left. He should do the right thing and express post it back ASAP.

I know – let’s sack the coach.

The ABC’s Tim Gavel has tweeted:

amazing interview with Rea. “they’ve spat in his face with that”. incredible. finally some honesty from the brumbies camp.

Seriously sports fans, listen to that audio from post match! Possibly the first honest post match presser in the history of sport!

Lorraine White - 3 hours ago
Really good food and such great people. Love it. View
Kathleen Brooks - 5 hours ago
Juha Turunen this is what I was talking about. View
Fiona Mutton - 6 hours ago
Such a great cafe , always friendly and some of the best food in the region, whenever I am driving through from Braidwood thi... View
News 23

bd84 - 5 hours ago
There’s always many “what about...” for things that people think are worthy. The budget isn’t a bottomless pit and th... View
HiddenDragon - 6 hours ago
"Whether the Coalition has traded in the debt truck or just parked it out of sight until needed remains to be seen." That par... View
Trevor Hicks - 7 hours ago
Jason Duarte Thanks to the ACT government... View
Opinion 94