Time to forgive and forget after Heather Reid’s apology 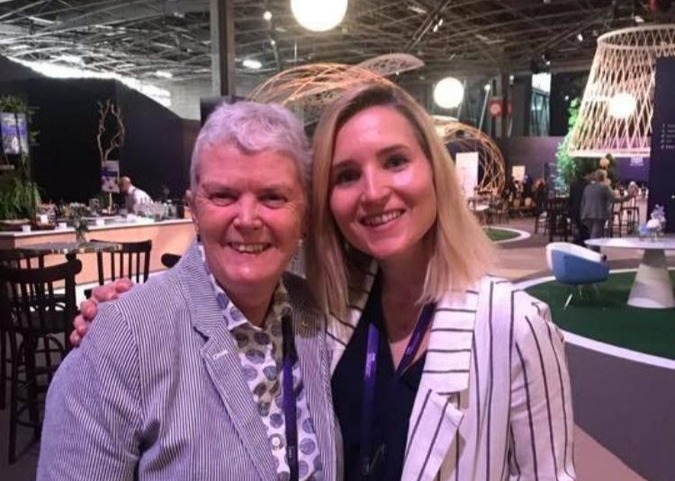 The photo of Heather Reid that sent Twitter into meltdown.

How often does the story of a smiling woman photographed in France make the headlines? Rarely, if at all, but your odds will go up if your name is Heather Reid.

Eyebrows were raised when Football Federation Australia director Heather Reid was snapped smiling in France where she was invited by FIFA to attend its women’s football convention on the eve of the women’s World Cup.

Reid, who is currently taking sick leave from the FFA board as she recovers from endometrial cancer, covered the cost of her own flights and accommodation and made the decision to take the holiday following her doctor’s recommendation.

But once the Matildas suffered a shock loss to Italy in its opening match on Sunday night, all hell broke loose. Many took to social media to blame the loss on her and her involvement in the unceremonious sacking of former Matildas coach Alen Stajcic just six months before the World Cup.

How dare she be over there in France, smiling, enjoying herself when she is to blame for the Matilda’s loss, many football fans said, seething. She was the one that got him sacked after all, right?

Let’s rewind for a moment.

In a statement, FFA said it made the decision to sack Stajcic because the board formed the view that the Matildas would benefit from a new coach for the FIFA World Cup in France.

As a board director, Reid had a say in his sacking, but she wasn’t the only one to cut the coach’s contract. Stajic’s contract was terminated by the board “exercising its contractual right of termination by making a pre-agreed payment in lieu of notice”. Boards act as a whole, not as individuals and they are obliged to do so by their charter of operations.

Reid’s unnecessary involvement was in the comments she made suggesting the public would be “shocked” if they knew the truth. She told the media Stajcic should never work in the women’s game again. She has since publicly apologised for these statements.

She has not apologised for her role in the sacking of Stajcic and why should she? The board stands by its decision. All she has apologised for are the comments she made about Stajcic. Public baying for more blood is unnecessary and will achieve precisely nothing for our World Cup campaign.

Why can’t we throw our support behind the Matildas regardless of a win, loss or a draw, rather than looking for someone to blame?

Why is it wrong to judge the board on the results of the team when as you say above they’re in control?

Well sports bureaucrats living it up at big overseas events never plays well particularly when you consider the exorbitant amount it costs to register junior players.

Heather (and the Board) will be judged by the performance of the Matildas at the World Cup. Sacking the previous coach was a huge gamble and quiet astonishing to the public. The players seemed happy with him & the team was playing superb football in fact only the USA was playing better.
Its all gone south since then. If the team does not get into the next round then Heather & the whole Board should resign.

Dan Cope - 57 minutes ago
👏 well done Emma. View
Alexandra Mary - 1 hour ago
Jaimie-Lee Peattie it is! So awesome to see more being set up View
Montana ONeill - 2 hours ago
This is good to see and hopefully it grows throughout the region to other areas💙 View
Opinion 51

J D - 2 hours ago
Fact one : Attendance to vote in an Australian Federal Election is Compulsory. Fact two : the Australian Electoral Commission... View
Capital Retro - 6 hours ago
That's pretty much what I said but in auditing after polling day the anomalies would be detected and the person could be dete... View
News 3

Acton - 4 hours ago
Bats carry desease, shriek incessantly, spread fleas, stink, excrete copiously, but have been allowed to take over part of Co... View
kenbehrens - 7 hours ago
The Government has been keen advocates of people, especially renters, being able to grow their own food. We have a vege patch... View
jwinston - 9 hours ago
Our hospitals are dysfunctional, roads aren’t maintained and education is nearly non-existent. But let’s waste time produ... View
News 10

The housing market in Canberra is absolutely back with a vengeance. There were a record number of auctions last week:...
News 15

@the_riotact @The_RiotACT
We've got all the hot news in this week's newsletter - from hot property, to hot-desking. Subscribe now! https://t.co/nl4QFZTDQW (33 minutes ago)

@the_riotact @The_RiotACT
The hearing for an Australian Federal Police officer accused of forcing a woman to touch his genitals has ended with his lawyer arguing there was "ample basis for reasonable doubt" https://t.co/TfE5K5Ae2H (48 minutes ago)