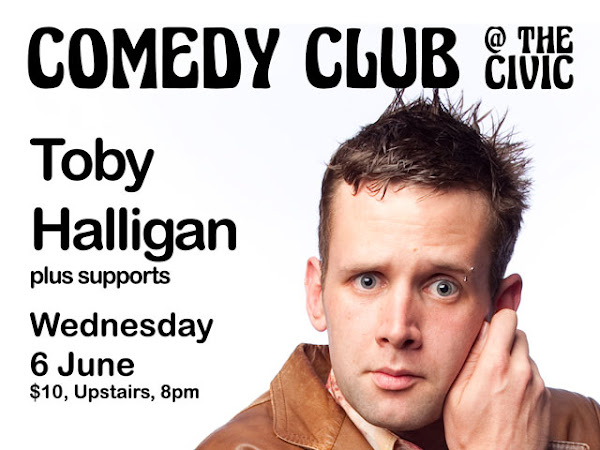 Toby Halligan is one of Australia’s most exciting young comedians and improvisers. A NSW Raw Comedy semi-finalist, and winner of the Worlds Debating Comedy Award in 2003, he’s performed at the Midsumma Festival, LOL Comedy at Melbourne Fringe, on Gay News Week, and has also appeared on Strictly Speaking, a public speaking reality TV show on the ABC. He appeared in the 2010 Melbourne International Comedy Festival as part of the political showcase The First Three Up Against The Wall, and opened for Mathew Kenneally at the 2009 Festival. Toby has performed improvised theatre shows around Australia and is co-author of the popular Diary Leaks website. His writing has appeared on The Punch, in mX, and at BigPond News.

The show will be hosted by Tom Gibson, with support sets from Jez Margosis, Frances Carleton and David Graham.

Marc Edwards - 6 minutes ago
David Field Dickson’s not depressing, not everything needs to be sparkly and new. View
Tim Scully - 57 minutes ago
Hmmm. “... two levels of basement car parking.” View
Sally Pinata - 1 hour ago
KinWah Kee is this what you’re talking about? View
Food & Wine 103

Russell Nankervis - 7 hours ago
I'm going to work. If the date changed I would be a little more keen to party View
Patrick Boucher - 20 hours ago
What happened to the concert being free? Used to be View
Business 17

@The_RiotACT @The_RiotACT
@UniCanberra has filled its courses for 2021 despite many international students being unable to return to campus this year https://t.co/jozj9N6tv5 (3 hours ago)