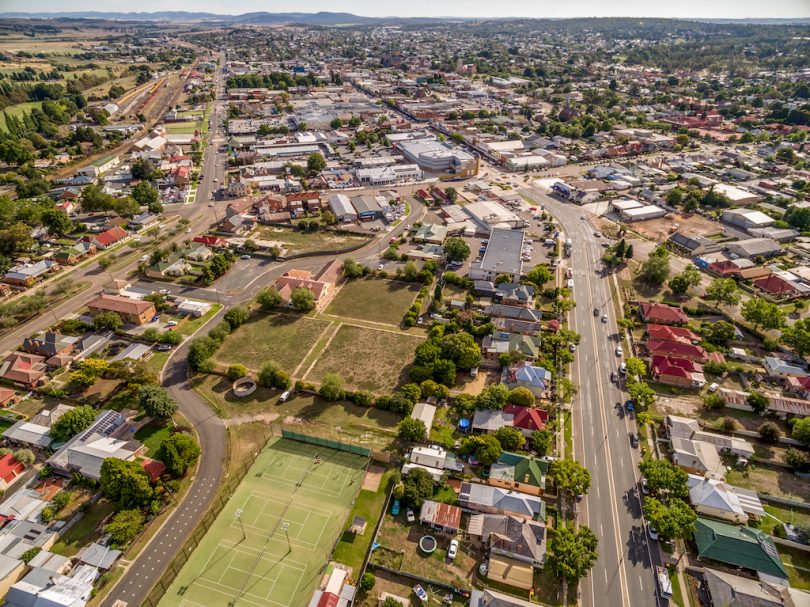 Forty one townhouses proposed on the fringe of Goulburn’s central business district should provide a more diverse range of housing.

The RiotACT.com reported in March the large site bounded by Lagoon Street and Fenwick Crescent was previously targeted as a potential Woolworths supermarket site. At one stage eight character homes, including Goulburn’s only double-story weatherboard home, were included.

Those homes have been purchased separately. This residential development will sit mostly on the former Fenwick Crescent bowling greens, which have been unused for many years.

Mr Thompson has developed supermarkets and service stations for Woolworths in Canberra and southern NSW. He developed the new Caltex Service Station and Red Rooster at South Goulburn that sold for $4.5 million in June. The developers paid $1.725 million for this site and Mr Thompson says building a residential development will make a nice change.

Mr Gordon says the mix of housing will include one-bedroom dwellings with a study for adaptable and elderly living and larger, two to three between two-storey dwellings, all with court yards, orientated as far as possible to the north for solar access, and balconies on the upper floor.

One section will overlook tennis courts, and a path will lead through the buildings to the courts, where the developer is providing car parking and landscaping.

Goulburn Heritage Group has met the proponents and believes the project is well suited to the site.

“It is not too crowded and has a variety of unit designs making maximum use of northern and eastern aspects,’’ spokesman David Penalver says. “The layout is simple with no ‘dead ends’.’’

An architect, Mr Penalver says the steeply pitched roofs are excellent and suggests some upper attic roof spaces internally, and several other design changes which Mr Gordon says will be considered.

The designs are aimed to appeal to young families, young professionals, downsizers who want to live in the heart of the city, investors, adaptable living for the elderly and retirees.

Mr Gordon said the developers wanted to make an impression with the development, one of the first of its type for Goulburn.

“They don’t want them to be brick boxes, they are willing to pay for a bit of architecture, which is good news.”

Town houses are often described as the “missing middle” in Sydney and Canberra housing markets, and the NSW Government has been encouraging more affordable townhouses in rural areas, according to Mr Gordon.

“It creates an affordable alternative to apartments, and rather than apartments often being on upper levels without their own garden, in the townhouse model, everyone can have their own bit of earth, a landscaped courtyard at ground level,” he says.

“Having a shared party wall actually improves the thermal performance of a building, because you have a conditioned space next to you rather than a wall to the outside elements. So they actually are very thermally efficient as well,” Mr Gordon says.

Arlene Smith - 36 minutes ago
Kathleen Mary Smith Erin Winter in adventure park? View
Bridget Trussler - 1 hour ago
My son many years ago went head into the pole. Please get rid of it before someone is killed...... View
Claire Anderson - 2 hours ago
Daniel, the newer ones really do stop way WAY more abruptly. I too rode the old ones with help of people pulling and never go... View
News 13

@the_riotact @The_RiotACT
Bored with your usual #dining options? Why not try #Ethiopian? There's a reason Ethiopian Down Under is Pearce is a beloved #institution. Let Michelle Taylor guide you on this culinary adventure https://t.co/UZL0Yvgkar (32 minutes ago)