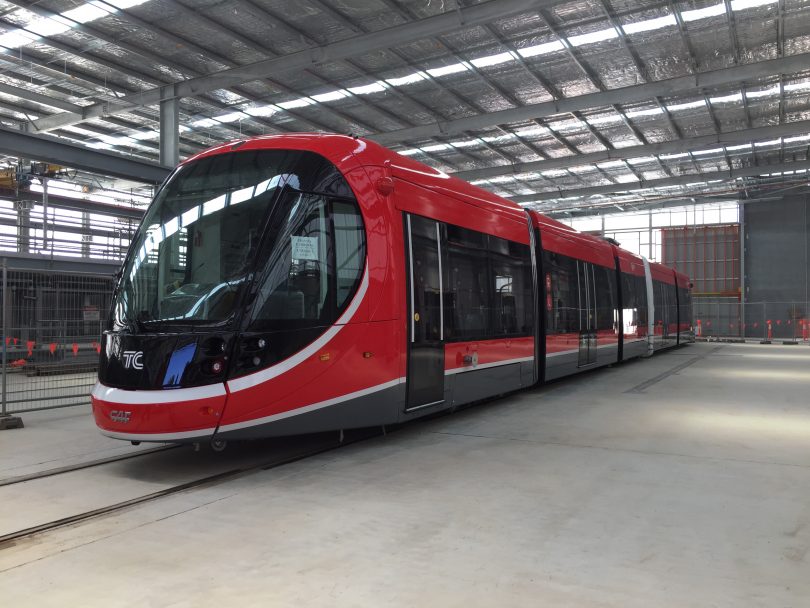 Track testing of Canberra’s first light rail vehicle (LRV) will begin in early April on the northern section of the corridor with Canberra Metro focused on a late 2018 delivery date for the $1 billion project.

The ACT Government and Capital Metro today (Wednesday) unveiled the network’s first LRV at the Mitchell depot where the 14-strong fleet will be maintained and stabled, with a vindicated Chief Minister saying Cabinet would consider the business case for Stage 2 to Woden later in the month and his mind already turning to Stage 3.

The 33-metre long Spanish-made LRV will carry 207 passengers, including 12 priority seats and two wheelchair spaces, and run at up to 70km/h. It will be equipped with on-board Wi-Fi as well as air conditioning, and in an Australian first, bicycle storage.

Capital Metro Chief Executive Glenn Stockton said the rest of the fleet would be arriving at the rate of one a week from the end of March, with the full complement of 14 vehicles in Canberra towards the middle of the year.

In the coming months, more track slab will be installed, particularly down Northbourne Avenue to the city and then progressively the rail, overhead power poles and wires, followed by energisation and live testing.

Mr Stockton said the northern section would go live in early-April to allow testing of the LRV.

A slight delay meant the LRV would not be commissioned until later in the month or early February, when fitting out would begin.

Capital Metro would also be introducing key focus groups, such as those with mobility or sight issues, to the LRV so that they gain an understanding of how they can use it safely. 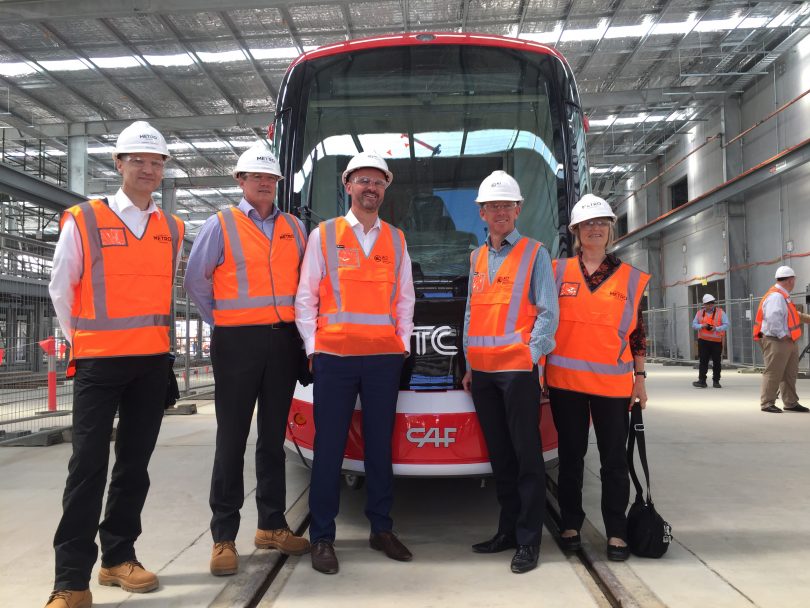 Mr Barr said the LRV’s unveiling was an important milestone and another practical example of progress on the project and of the Government meeting its election commitments.

He said that with Canberra’s population heading towards half a million it was crucial to invest in transport infrastructure now.

“That’s why we’re continuing to work on Stage 2 of light rail together with further investments and initiatives to improve transportation within the city,” he said.

He said the sceptics had been proved wrong and he was particularly pleased with the rejuvenation of the Northbourne corridor which is occurring faster than expected.

“There were many sceptics in the lead-up to the procurement of this project and many people said I wouldn’t be standing here as Chief Minister after the last election as a result of our advocacy for this project,” he said.

“Those sceptics also said there wouldn’t be the sort of investment and renewal in the Northbourne corridor we’re witnessing.”

He said there would a continued focus on public transport improvement, with light rail at the centre, including more rapid bus routes, improved demand responsive transport and more active transport options.

“It’s all part of making Canberra an easier city to get around and a better city to live in,” Mr Barr said.

The ACT Greens’ Cabinet Minister Shane Rattenbury said the Canberra LRV was the first in Australia to have a dedicated space for bicycles and was part of the strategy to provide as many options and as much connectivity as possible.

“I think well see people using light rail as their central transport spine, particularly when Stage 2 to Woden is complete,” he said.

He said travelling to and from Gungahlin would be much easier and the Government was now considering a stop at Mitchell, where traders have been campaigning not to be bypassed.

“This is a really important part of shaping our city for the future. This is about providing modern environmentally friendly transport alternatives for Canberrans,” Mr Rattenbury said.

The construction of a city-wide light rail network was both a Labor Election Commitment and part of the ACT Greens and ACT Labor Parliamentary Agreement.

Oh, if only they had waited a bit longer: https://youtu.be/LCMky_lAWc4

It’s no wonder that Transport Canberra now publicly admit that the City-Gunghalin tram is about urban renewal and not public transport because the much touted Gold Coast light rail has failed to deliver on reducing road congestion, reducing travel times and as a consequence it is failing to attract new riders.

Given the similarities between the two projects we can expect the same outcome here in Canberra.

It should be noted also about how much the Gold Coast tram service is subsidised and how operating costs are expected to increase.

I can’t say the ACT Labor/Greens government will be leaving us a huge legacy of debt because I don’t believe they will ever be voted out. Having said that the only other option is man the lifeboats now.

“Vindicated” Chief Minister? How so? What did he need vindication from? 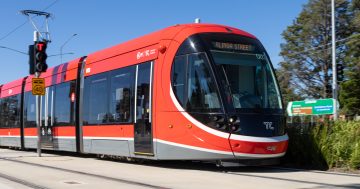