It’s week two of the Festival and along with truffle, there’s a strong smell of alcohol in the air.

In a region where our local wines are considered the perfect match for local truffles it seems as if there’s an alternative. The natural ability of black truffles to enhance almost any flavour is why it’s so prized in dining. You see, it’s a natural glutamate like garlic and brings out subtle flavours. Last year our favourite local brewer Richard Watkins at the Wig & Pen added some truffle slices to the metre tall infuser on their bar. They use it to pull various ales through various herbs and spices. Richard added some slices of truffle at the life’s end of a batch of ingredients and found that suddenly the tired old vegetable matter had come to life. A little experimenting and now their truffled beer is a truffle seasonal hit. It doesn’t taste like truffles, but it tastes completely different to the ales before truffling (BT). Good, not just interesting, good.

Meanwhile down at the Fyshwick Markets ‘Plonk’, Anthony Young sourced some beers, ordered in some pizzas with added local truffle, and tried to find some food and craft beer matches. The results are shown on this short Youtube video, but we were really taken by the beer from the small Goolwah (South Australia) brewery Steam Exchange. They had a truffle infused beer but in bottles. Or it was in bottles for a short while. Something to do with a truffle induced secondary fermentation caused them to become, as Anthony describes, ‘small volcanoes’. He managed to decant enough for us to taste and again the truffle had clearly worked its black magic.

And then there’s truffled vodka. It’s been a feature of almost every truffle grower’s fridge that we’ve been allowed to look in, and in the last two weeks, seems to have gone public at the Festival. Chef Tom Moore passed a taste of his infused vodka around at the Farmers Market and you only needed a teaspoon full to get a real truffle flavour hit. Unlike the beer, vodka’s neutral taste just seems to suck up the truffle flavour. And it lasts. The alcohol kills the living fungi and like that agave worm in tequila it just sits there looking pretty. Black, dead and pretty. You don’t need much, $10 worth of truffle will turn a bottle of good vodka into something even truffle sceptics have to admit tastes special.

Have a look at the Truffle Festival website for more ways to ‘Taste the mid-winter magic’, and do it while the very short season lasts. 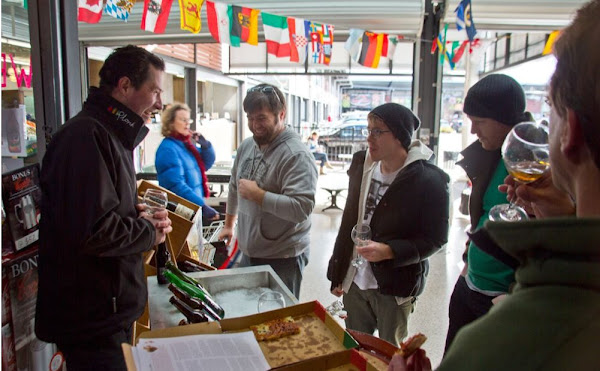 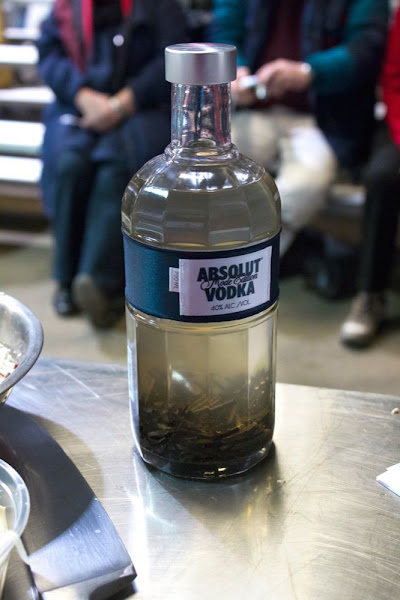 Dream Cuisine on Whyalla Street (On Google Street View it’s the Stained glass shop, I think) have for the festival a black truffle macaron (So: double the trendiness). It costs.. $10! Waiting till the missus opens the bag and gives me a bite before I can report on its qualities.

It’s not officially part of the Truffle Festival by the looks of it, but the Kitchen Cabinet at OPH is having a truffle lunch on Sunday the 8th that looks pretty good.

The lady at Plonk (I’ve forgotten her name) recommended a Marsanne to go with a truffle omelette. It was from Collector Wines, very near to where the truffle came from, and was wonderful. Now we just have to pay off the new pan, the truffle and the wine.

But it was worth it.

Maybe I’ll try the vodka thing; it’s just that vodka seems like an everyday necessity rather than a treat, and it looks a bit murky.

phydeaux - 55 minutes ago
"Penalising “poorer” [sic] people less, is an incentive for them, and a serious grievance to others" So sorry to hear tha... View
kenbehrens - 58 minutes ago
Difficult question. I've often thought that fines are inequitable with those on higher incomes not adversely impacted. Yet th... View
domenic - 3 hours ago
Penalising people differently based on their ability to either do well for themselves or not is a socialist ideology that I d... View
News 4

@the_riotact @The_RiotACT
ACT Senior Australian of the Year and 50-year volunteer with @stjohnaustralia Valmai Dempsey wants mandatory #first-aid training for learner #drivers. She says it's a no-brainer https://t.co/Xovhw0Ec3H (24 minutes ago)