Turner from the Tate at the National Gallery. A review

Barcham and I went down to the media preview of the National Gallery’s upcoming blockbuster show Turner from The Tate, The Making of a Master this morning.

It didn’t really justify both of us going, we just both wanted to see it. We were not alone as it was one of the most well attended media events I’ve been to.

Proceedings of course started with Gallery boss Ron Radford getting his chance to talk to the assembled reptiles. 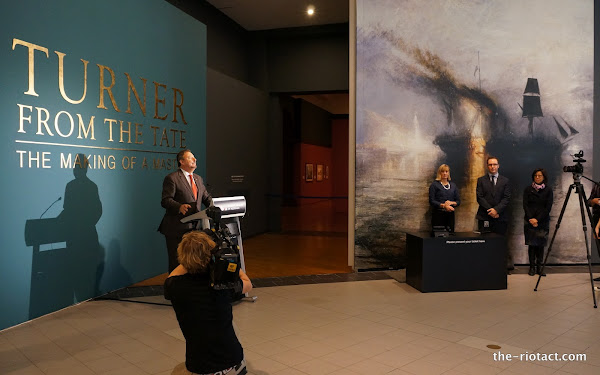 Ron was keen to point out that while the Gallery had done a Turner exhibition 20 years ago (and gallery regulars tend to be old enough to remember that long) only two works were repeated between the decades.

Turner is an interesting painter in that he bridges the gap between the bowl of fruit school of realism and something akin to impressionism (although he significantly predated the Impressionist school).

What this means is he offers a lot to both the established art lover and to the curious but uninitiated.

You can tell what he was trying to paint without much trouble (harbours, coasts, ships, fields, rivers, churches, the sky) but how he went about it, and particularly the use of light in his paintings, is downright fascinating no matter how much art you’ve consumed.

It’s worth taking the larger works in from different angles and distances too, some work better a little further away.

The exhibition only has a shortish run until 8 September (it opens Saturday) so if you’ve got a spare afternoon before then you really don’t want to miss it.

Tickets are timed and available online.

The selection of works is wonderfully diverse. Large majestic landscapes best viewed from a distance, small studies of light and colour to be scrutinized up close, and (perhaps most interesting) half finishes studies and sketches to be admired.

The pieces were well supported with information about the ‘when, where, and why’ of each pieces creation.

Totally worth a trip.

The Family Activity Room was pretty cool. There were giant screens depicting Turner’s maritime landscapes that you could view from a small boat. It was rather cute.

Even better were the dozen or so easels spread around at ‘kid’ height. Each easel either had a some paper with water colours available for kids to try and paint their own masterpiece, or an iPad for kids to interact with.

It was an odd kind of gift shop.

The preview ended as it started, with Ron on camera. 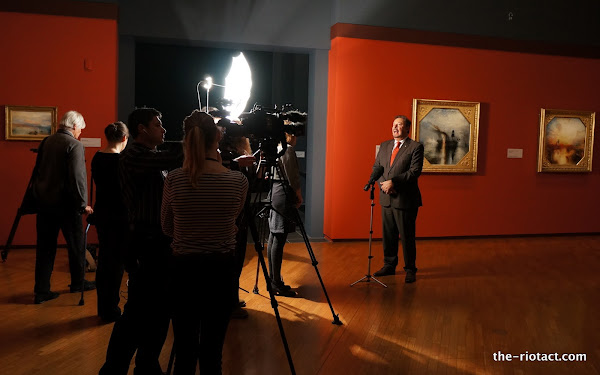 5 Responses to Turner from the Tate at the National Gallery. A review
Filter
Showing only Website comments

The gift shop is always odd these days – for the last two blockbusters they have sold frilly knickers – I suspect attempting to play on the environments in which the artists did their thing – turn of the century Paris for instance. I’m surethis time I’m going to find mens undies to capitalise on the male dominated maritime era.

I must admit I get a bit pee’d off by the cashing in. The ticket prices really should cover the costs of the exhibition and more. The gift shop is extortionately priced right up until they turn into a bargain basement store at the endof the exhibition.

About as relevant to the Canberra Centenary as the stated C100 outcome “enhance Indigenous employment in remote communities” !!!!!!!!

Get rid of it!! Bring back the Tittycarp!!!

Exactly embrace the tittycarp for it too needs some lovin.’ Who the fark is Turner anyway,was he a fitter?

How much ratepayers’ money has Barr tipped in this time?
The last time it was half a billion dollars from his “special events account” together with a lot of fanfare.
I must of missed it this time.

Get rid of it!! Bring back the Tittycarp!!!

Richard Orchard - 10 minutes ago
So only white people can be racist right? It’s the white people who have to read this article, and repent I’m assuming? A... View
Peter Marshall - 29 minutes ago
I that's entirely fair, but I think the issue of racism is primarily about the dominant culture/ethnicity. In Australia that'... View
Peter Marshall - 35 minutes ago
"About Zoya Patel Zoya Patel is the award-winning author of No Country Woman, a memoir of race, religion and feminism. She is... View
Community 3