Two ANU historians in mix for Book of the Year 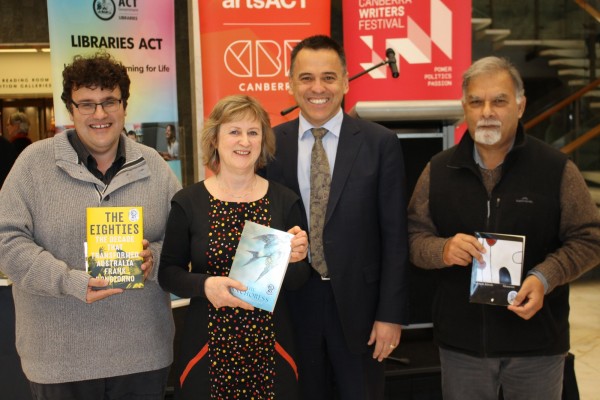 Two ANU historians feature on the shortlist for the ACT Book of the Year awards announced today: Ann McGrath, whose book Illicit Love examines interracial sex and marriage in the US, and Frank Bongiorno, for The Eighties: The Decade that Changed Australia.

Joining them on the list, announced to coincide with the inaugural Canberra Writers Festival which starts today, are Merlinda Bobis for Locust Girl: A Lovesong, Robyn Cadwallader for The Anchoress and Subhash Jaireth for Moments.

Ms Bobis, who now lives in Canberra after being a regular visitor for many years, won the $40,000 Christina Stead Prize for Fiction for her dystopian novel about climate change in May this year.

Ms Cadwallader’s The Anchoress has been reviewed in The New York Times and The Guardian. Elizabeth Gilbert of Eat Pray Love fame describes it as “a detailed, sensuous and richly imagined shard of the past” that places its narrator, the anchoress, “in that tantalizing, precarious, delicate realm: convincingly of her own distant era, yet emotionally engaging and vividly present to us in our own”.

The shortlist announcement came on the same day we will learn who has won this year’s prestigious Miles Franklin Literary Award. Hot favourite for the Miles Franklin Charlotte Wood will appear at the Canberra Writers Festival over the weekend.

ACT Arts Minister Chris Bourke said there had been 39 entries across fiction, non-fiction and poetry for the ACT Book of the Year award this year.

“To have this many books submitted for consideration this year shows our local writing sector is thriving, and I’m thrilled to be able to announce the shortlist during the Canberra Writers Festival, which kicked off today.

“I encourage everyone to read this year’s five shortlisted books and to enjoy everything from history and intrigue to magical realism and stories of love and loss. You can then vote for your favourite book in the 2016 People’s Choice by visiting the artsACT website from today.

“The shortlisted books can be borrowed from the ACT Libraries – however, if you would like a copy to keep, visit your local bookstore.”

Voting for your favourite book will close in time for the winner of the 2016 ACT Book of the Year Award and People’s Choice to be announced later in the year at the ACT Writers Centre’s annual awards night.

The ACT Book of the Year Award aims to support the development of ACT-based writers and promote writing in the ACT. It recognises quality contemporary literary works published in the previous calendar year.

t2owe - 7 hours ago
I really don't care about what they say about the Libs. Given the antics of the Barr government, just how much more damage co... View
t2owe - 7 hours ago
How about a change of government. It's way over due,. ACT government is consult in name only, and planning is off the wall.... View
Lifestyle 7

JS9 - 8 hours ago
"You also complain that Coe has promised to give away lots of revenue and spend plenty too, but with no evidence as to how he... View
George Watling - 11 hours ago
Yes lets have more $1.9 billion spends on Trams and bad urban infill stuffing up the city. View
HiddenDragon - 11 hours ago
"Labor, coming from the advantage of incumbency, says its promises are fully funded but with debt approaching $8 billion in f... View
ACT Election 98

JS9 - 8 hours ago
"But Mr Lawson said he would have thought a Greens party would be opposed to the infill project getting underway that would h... View
News 9

Daniel Duncan - 9 hours ago
Another reason to vote Barr and his crony's out. View
Rainer Busacker - 10 hours ago
Steve Wood "Gunna-Do-Barr" sprooks a lot of things, especially now just before an election. When and if ever will he actually... View
ACT Election 11

Acton - 9 hours ago
You do not dispute the fact that Barr = high rates, but appear to have some conceptual difficulty with 'nothing else matters'... View
russianafroman - 11 hours ago
Maya123, All Labor has done for us is build chic apartments for the rich. The Liberals are looking out for the blue collar bl... View
JC - 11 hours ago
People should also be asking what Coe equals. Because it isn’t overly clear. We know they stand for everything that “anno... View
ACT Election 1