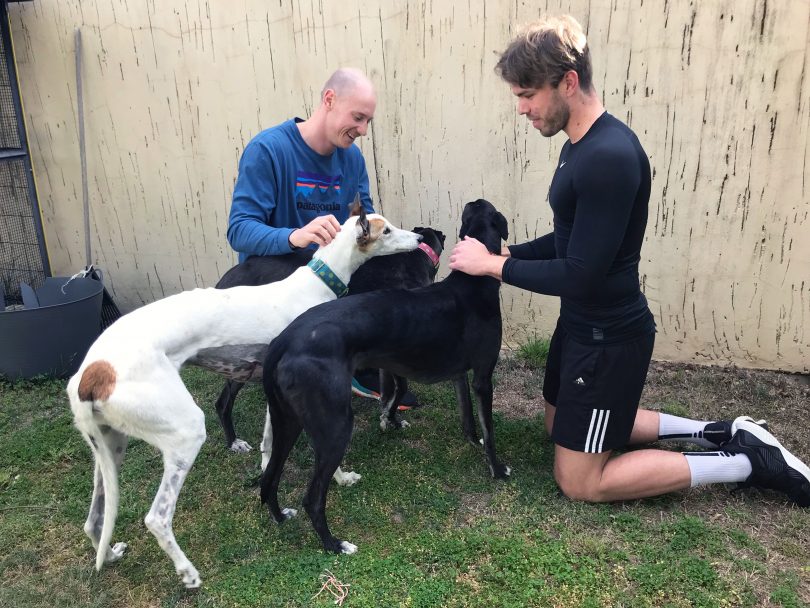 Ethan Sharp and Tom Metcalfe were rendered speechless when they first heard of the plight of greyhounds, left homeless and abandoned once their final race was run.

A year has passed since the ACT Government legislated a ban on greyhound racing. For the greyhounds who no longer have a career path in front of them, this meant that there would be no more rabbits to chase as the dogs become surplus to the requirements of the larger industry.

Greyhound Rescue, a charity which rescues and re-homes ex-racing greyhounds, is struggling to cope with the numbers of greyhounds that are coming out of the industry, with a two-to-three-month waiting list for retired greyhounds trying to find their forever home.

The charity, which is run by a retired couple in their 70s, Peter and Janet Flann, said around 20,000 greyhounds are put down each year and the battle to find families to take in retired greyhounds is particularly straining.

When fleet-footed, running fanatics Ethan and Tom heard this, they knew something had to be done. So they resolved to raise money the best way they knew how – by running themselves.

“Tom and I know a lot of people who look after rescue greyhounds and we have heard stories of Canberra dogs who go into the racing industry and are left without a home after that their career ends,” Ethan shared.

“We were really saddened for these dogs who can have really shocking lives.

“We reached out to Greyhound Rescue to see how we could help out and we got to meet a lady who showed us her greyhound and told us all about her dog. We knew from that moment that we were going to raise money for the charity by running an ultra marathon.”

Greyhound Rescue provides all medical care for the hounds in its care, as well as their food, toys, bowls, treats, collars and leashes. As one can imagine, the costs can add up really fast. 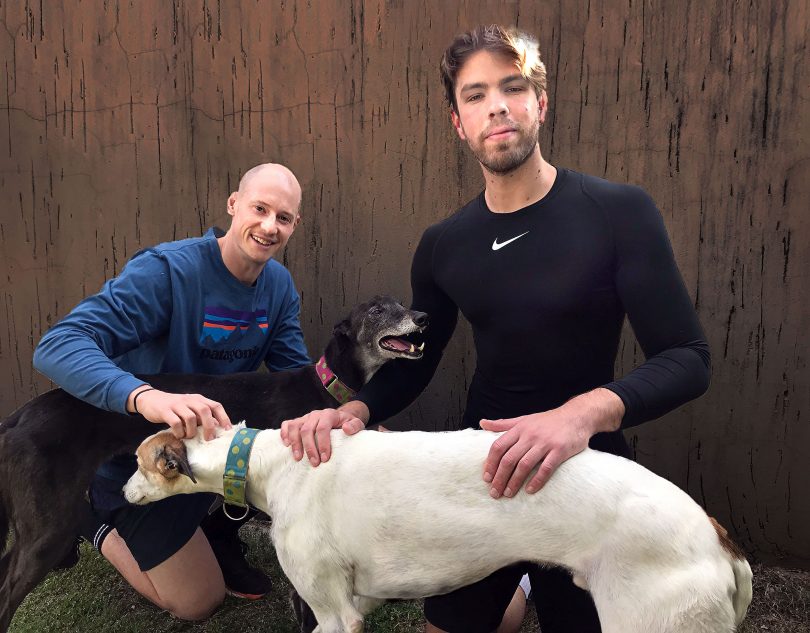 The duo is hoping Canberrans will sponsor them in the Snowies Ultra Trail Run, a 50km ultra marathon through forests, up mountains and across deserted expanses in the Snowy Mountains.

For the two mates, the run is about raising money – the target being $1000 – but tackling the rough terrain and facing up to the challenge factors into their excitement as well.

“We’ve been doing daily runs during the week and gradually increasing the distance. We’ve also been going up and down some of the surrounding mountains in the Canberra region on weekends,” Tom said.

“We recently ran a half marathon as part of a training. It hasn’t been easy but it is a good challenge. We are super excited for this opportunity to not only challenge ourselves, but to also raise funds for such an amazing cause!”

To support Ethan and Tom on their mission to raise money for retired greyhounds, click here. To adopt a greyhound or become foster carers, click here.

How can I find out hoe to hrlp.

Hoping you raise way over $1000. Sadly that doesn't go far these days.

Thank you Riot ACT for supporting us!

Edith Clancy - 4 minutes ago
Jacqueline Stuart and yourself xx View
Linda Bruce - 5 minutes ago
Wonderful and well deserved 🙏🍾 View
Moka Kim - 15 minutes ago
Fantastic He does so much for the community. View
Sport 14

Daniel Pickering - 2 hours ago
Legend. Taught me at Melba high back in the day. A great mentor! View
Ramon Montero - 3 hours ago
I do remember him when started arbitrate football, indeed very polite and educated a young person. I had the privilege to mee... View
Kacey Butterworth - 15 hours ago
I feel extremely privileged to have had Ben as a mentor, teacher and year co-ordinator throughout my high school years. He ta... View
Community 41

Ol L - 4 hours ago
If it’s not a museum then why have so many artefacts on display? Surely a very somber and minimal display of artefacts woul... View
Kerry Apted - 14 hours ago
Tiger Fit it's irrelevant what you see it as unfortunately. They're not "trying to turn it into a museum", it's already a mus... View
Tiger Fit - 15 hours ago
Kerry Apted that's not how I see it View
Opinion 1

It's higher off the ground than any of its rivals. It has an all-wheel-drive system and driving modes for deep...
News 34

@The_RiotACT @The_RiotACT
Areas of Civic are a disgrace and completely out of character with a modern planned city like Canberra. It's time the neglect ended, says Ian Bushnell https://t.co/jwSVzqWoKc (57 minutes ago)