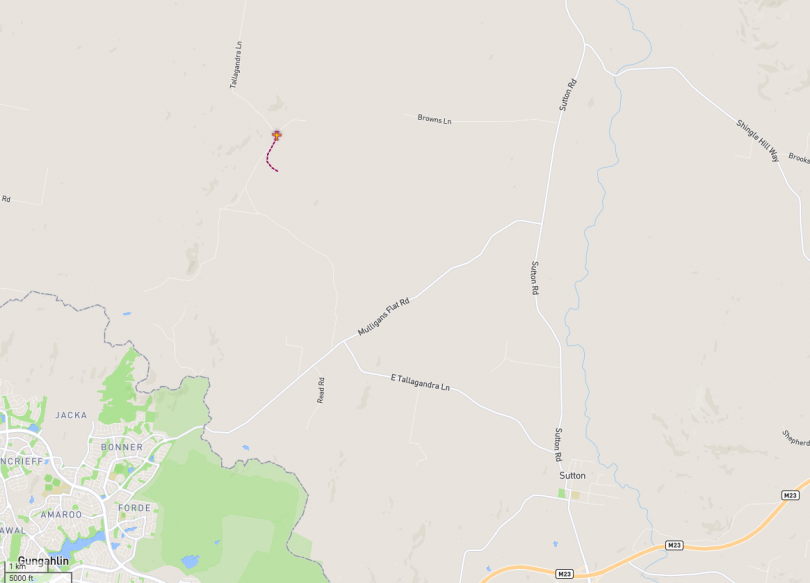 A map showing the aircraft shortly before the crash. Image: WebTrak.

Two people have died in a light plane crash just north of Canberra late this afternoon.

A spokesperson for NSW Police confirmed the crash occurred at about 4:30 pm in a paddock near Tallagandra Lane in Sutton.

Emergency services are on the scene and further investigations will commence as soon as possible.

“Two people on board have died at the scene, and officers from the Hume Police District have commenced inquiries and have established a crime scene,” the spokesperson said.

The NSW Rural Fire Service said the plane was a Cessna fixed-wing aircraft.

The ABC has reported the aircraft may have been carrying out aerial inspections of nearby powerlines before it crashed.

There are no reports of the direction the aircraft was travelling.

Conditions were clear with light winds at the time of the accident.

Savita Ubhe - 1 hour ago
Joel Suryawanshi wow domestic violence seem to be a huge issue there. Sad! View
Margaret Freemantle - 9 hours ago
Tegan Martin not sure what the answer is. Somehow, there has to be some pride instilled - perhaps well kept places get reduce... View
May Mac - 9 hours ago
Is the government competing with everyone else to book tradies in to do work? Why don't they have their own, like they used t... View
Food & Wine 12

Helen Mangos-Chadwick - 4 hours ago
What a beautiful photo, well done Dennis!!! 👌... View
Lorraine White - 9 hours ago
Really good food and such great people. Love it. View
Kathleen Brooks - 11 hours ago
Juha Turunen this is what I was talking about. View
News 81

Nada Krstin - 5 hours ago
Jo Hann see my recent post to reply to your "if you pay tax, you should have an option to vote for the government that spends... View
Nada Krstin - 6 hours ago
Jo Hannwow Jo, so you are a subject matter expert in employing tradie apprentices? You have been an employer have you? Plus a... View
What's On 16

James Hutson - 10 hours ago
Josh Ongley so you’re supporting or dissing me? Hard to tell View
Josh Ongley - 11 hours ago
James Hutson yeah because it’s not important to us In Australia we are a multi cultural society 😂😂😂 View
Food & Wine 7

bd84 - 11 hours ago
There’s always many “what about...” for things that people think are worthy. The budget isn’t a bottomless pit and th... View
HiddenDragon - 11 hours ago
"Whether the Coalition has traded in the debt truck or just parked it out of sight until needed remains to be seen." That par... View
Trevor Hicks - 13 hours ago
Jason Duarte Thanks to the ACT government... View
Opinion 94