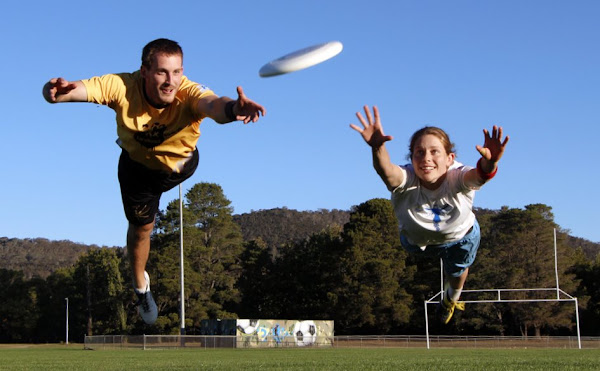 Frisbee is awesome, Ultimate Frisbee can only be more awesome one would assume.

If you’re keen to check it out there is a massive tournament happening this weekend on Dickson oval, with 300 players from around Australia competing.

This competition brings together the top 8 men’s and top 8 women’s teams from around Australia for a final hit out before the National Championships over Anzac day in Bendigo.

‘Ultimate’, short for Ultimate Frisbee, is a fast growing Frisbee team sport, now played in over 50 countries across the world. In the last three years the sport has experienced viral promotion online, and the American Ultimate Disc League, the first professional league of the sport, recently completed its inaugural season. There are currently around 5000 active players in Australia, including around 600 in Canberra.

There will be teams from Perth, Melbourne, Sydney, Brisbane and Canberra attending the tournament, including last years winners: Colony, a Sydney based men’s team and Honey, a Melbourne-based women’s team.

In addition to these teams, there are also 2 elite-level Canberra teams that will be entering the tournament, and vying for a spot on the podium: Fyshwick United, the Canberra Men’s team and Factory, the Canberra women’s team. Both teams placed 3rd at the Regional Championships 3 weeks ago, and are hoping to improve their results at this tournament.

For more information about the event, check out the Brisbane Canberra Invitational website at www.canberraultimate.com/bci or the facebook event http://www.facebook.com/events/492995040750268/.

There will also be live results being updated on the webpage and a twitter feed throughout the day. You can also find out more about Ultimate Frisbee in Canberra on the Canberra Ultimate page www.canberraultimate.com

Richard Grainger - 33 minutes ago
That building is simply storage. The cost that the Archives desperately need funding for is to digitise the records. A lot of... View
Louise O'Donnell - 7 hours ago
Yes that is the repository, or storage area. The files (paper, digital, and so forth) need to be stored somewhere safe and en... View
Lori J Tas - 14 hours ago
Bet the ALP wont do anything either 😒 View
Community 1

Kimmy Hunter - 53 minutes ago
Well your very lucky because I had a family member told they can’t access nsw health and had treatment refused View
JC - 3 hours ago
Christian your $35 is not a co-payment that is you paying your doctor more than what Medicare pays then. The proposed co-paym... View
Crystal Darmody - 4 hours ago
Kimmy Hunter I'm currently in Sydney with my son and yes I'm an ACT resident. Not for an ENT but a service that is limitedly... View
Food & Wine 12

Jodie Sharples - 2 hours ago
Julie Warren this answers our questions from yesterday View
Amy Stewart - 11 hours ago
Mark Turner this is what we drove past… View
Michael Bailey - 12 hours ago
Laura Ann this weekend??? Maybe Sunday recovery meal…… View
Opinion 15

chewy14 - 2 hours ago
JC, $60million a year for one stage of light rail that services a tiny minority of the population. With the government commit... View
Margaret Tuckwell - 2 hours ago
Nobody owns the whole buildings, but individuals so hard to enforce rules. View
Kriso Hadskini - 3 hours ago
The highways that approach are a disgrace too. So much large rubbish on every approach road to Canberra. Its embarassing. Peo... View
Food & Wine 11

Tyson Powell - 2 hours ago
Tyler Greening look at him doing so much more View
Sarah L Yoong - 3 hours ago
Great story which many of us can relate to. Well done Alan! View
Michael Rose - 5 hours ago
Congrats Alan for owning your story and the business! All the best View
News 62

It's been a tough and frustrating year at the Canberra Raiders for coach Ricky Stuart, but being named in today's...
News 65

Some of Canberra's southern suburbs and the Brindabella Ranges will be in the eye of a very strong blast of...
Business 60

@The_RiotACT @The_RiotACT
A sexual assault survivor explains how she was inspired to speak out about her domestic abuser by #AustralianoftheYear Grace Tame @TamePunk https://t.co/oI3MbK5gAZ (1 hour ago)

@The_RiotACT @The_RiotACT
A new bridge planned for the village of Towrang, outside #Goulburn, has locals split over losing their defining isolation https://t.co/9cpg9kfTaZ (3 hours ago)

@The_RiotACT @The_RiotACT
Alan Tse went from a career in a heavy drinking corporate culture to co-founding a Canberra startup that provides beverage options for those who choose not to drink alcohol https://t.co/RUUOzWV8eB (13 hours ago)