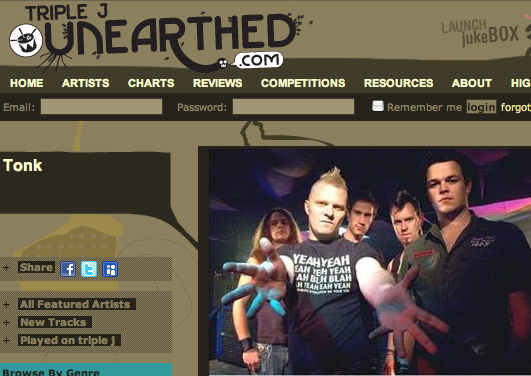 There are nearly 700 Canberra bands with tracks on the TripleJUnearthed website. In 2011 we’re going to explore them.

Today we lift the lid on Tonk who describe themselves thusly:

Tonk are the seedy underbelly of the Canberra music scene. This five piece cock rocking juggernaut are addictive like all the drugs you love, and give more sleaze and delight than a street full of hookers on a Saturday night. Their music is pure vice for the ears, with so many quality licks it should be an all girl porn movie. Vocally, Tonk pleases and teases with tales of vile seduction delivered by the bastard child of the Marquis De Sade himself. Tonk are everything that’s wrong in this world and everything that’s right about rock and roll. This dirty, gritty band are the perfect soundtrack for any debauchery you will ever want to experience.

The faster paced of the two tracks it reminded me more of Van Halen than anything, although Jinks’ vocal tics are very reminiscent of Axel Rose.

The music is exuberant, the guitars rock out, and there’s a hint of angst without being over powering.

Here’s the stadium number, more tortured soul in the lyric than you can poke a stick at, but sheer rock majesty from the guitars carries it along.

I was going to give them four and a half stars, but couldn’t think of a single thing to mark them down on.

The recording is good, the musicianship is great, the songs are well constructed as rock anthems.

Tonk may not be original in their sound but they are one of the better live bands in this town.

Am I right in thinking that “Stay” used to get airplay in the wee early hours on one of the local commercial stations?

Cheers for the kind words… it’s appreciated. I’d ask people to please not take the band description too seriously. We weren’t really expecting anything to come of this competition and decided to have a little fun with it.

Helen Brown - 2 minutes ago
Our kids came out of Dickson college very well equipped for there future vocations ....... View
Juliet Jackman - 28 minutes ago
Just stirring I suspect, no facts provided, no discussion or interviews of experiences, waste of the two minutes it took me t... View
Frances Jane - 2 hours ago
Elizabeth Fredericks the ratio of lower socio-economic background kids is much lower than other areas. Try comparing Telopea... View
News 35

Kerri Hallas - 1 hour ago
Why is this horrid archaic practice still even considered? View
Rachael Hart Smith - 11 hours ago
Fell for what exactly? It’s a disgusting barbaric practice that should never have existed anywhere.... View
Nell Feneck - 11 hours ago
Danielle Smith it never was a thing in act - bs political games... View
Business 5

Nick Savino - 3 hours ago
Try about 42% total in Canberra for Federal and ACT that's not quite most ….. View
Emmac Ph - 12 hours ago
John Dawe there’s unemployment in the ACT and the people who work in the public service are asked to do more every year wit... View
Eddie Majcic - 1 day ago
Why is it a surprise. Most are public servants in secure, well paying jobs...... Being bled dry by the stand over and extorti... View
Sport 18

Evan Hawke - 15 hours ago
One advantage of the tram to Gungahlin is that it was designed to be quicker than the bus it replaced, the tram to Woden is b... View
Denise Bourke - 1 day ago
those south of the lake laughed at suffering of those in the north. Seems they've forgotten pain to workers and businesses of... View
Bill Gemmell - 1 day ago
Could this be a clue that he is going to finally announce the delayed Molonglo high-level bridge? "Mr Barr also flagged furth... View
News 2

Travis Cragg - 1 day ago
From a college perspective, it would've been considerate if they could've waited until after the AST... View
Mathew Richards - 1 day ago
All about the money, not the outcomes for the students. View
show more show less
*Results are based on activity within last 7 days

A small beetle has forced the closure of The Good Guys in Fyshwick and Belconnen. The Khapra beetle, classified as...
Opinion 84

Take a peek at the Stromlo Leisure Centre opening today

Superlatives have flowed during a media peek at the $36 million Stromlo Leisure Centre at Stromlo Forest Park ahead of...
*Results are based on activity within last 7 days

Chief Minister Andrew Barr has written to Prime Minister Scott Morrison, warning him that Victorian parliamentarians who are planning to...
News 35

In the lead up to the last ACT election in August 2016, Labor staged a media conference on the shores...
Opinion 19

It's on. The campaign that is. With less than three months to go until election day on 17 October, the...

@The_RiotACT @The_RiotACT
Dog lovers in the region have been targeted in a Cavoodle puppy scam https://t.co/PxD5iX4qER (27 minutes ago)

@The_RiotACT @The_RiotACT
The ACT is on the lookout for fire towers operators. The role is an essential defence against bushfires, and successful applicants will have an office view like no other https://t.co/1igugnHwqU (1 hour ago)

@The_RiotACT @The_RiotACT
Canberra development giant Geocon is looking to increase the number of apartments and commercial tenancies in Stage 3 of its massive Republic precinct development in Belconnen. Fresh plans also reveal a new look for the 24-storey mixed-use project https://t.co/wcDChrRvI2 (3 hours ago)