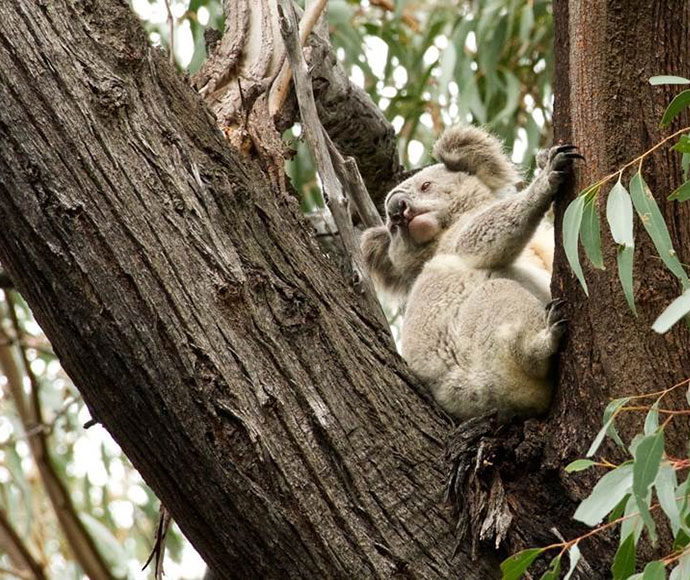 Koala in the Mumbulla Flora Reserve. Genome breakthrough is important for the survival of the species. Photo: Dave Gallen OEH.

Three University of Canberra scientists have helped complete the full sequencing of the koala’s genome, which could reduce its risk of extinction.

Professor of Genomics Janine Deakin and Professor Arthur Georges, an expert in ecology and herpetology, from the University’s Institute for Applied Ecology (IAE) contributed to the work of the Koala Genome Consortium.

The University said that the major breakthrough, which has been published in Nature Genetics, had given scientists unprecedented insights into the animal’s unique biology as they work to preserve it.

Koalas are not listed as endangered, but the animal is under threat from diseases such as chlamydia and koala retrovirus, and the findings could help researchers develop treatments for these devastating diseases.

Dr Deakin said it was a significant step toward ensuring the species’ long-term survival.

“Koalas are one of Australia’s most iconic animals and this important research will go a long way to ensuring we don’t lose them,” said Dr Deakin, who is the Director of the IAE.

“Not only did we find out interesting facts about the koala, but it represents a new generation of science-based conservation policy.

“Our work will be an important pillar in the NSW Koala Strategy 2018 and our discoveries have been deposited into a public database for scientists around the world to access.”

Researchers analysed over 3.4 billion base pairs and more than 26,000 genes in what is the most complete marsupial genome sequence to date. At 95.1 per cent accuracy, it is comparable to that of the human genome.

The genetic blueprint not only unearthed a wealth of information about the koala’s unusual and highly specialised diet of eucalyptus leaves, but it also provides important insights into their immune system, population diversity and their evolution.

“We helped assemble fragments of DNA in the right order,” Dr Deakin said.

“Think of DNA fragments as lots of different words in no particular order. We put these words in the right sequence, so we can now read the koala’s story. It was a huge task, but it represents a significant step forward in the fight to protect this iconic animal.”

The animal’s ability to survive on eucalyptus leaves that are toxic to other animals is due to two large expansions in a gene family known to be integral to detoxification.

Researchers found these genes are expressed in many koala tissues, particularly in the liver, indicating they have a very important function in detoxification and likely allowed koalas to survive on eucalyptus leaves.

The team also discovered that koalas can potentially fine-tune milk protein composition across different stages of lactation to meet the changing needs of their young.

The project, led by Director of the Australian Museum Research Institute, Dr Rebecca Johnson, was first launched in 2013.

“The Koala Genome Consortium has been a monumental journey into understanding our koala – one of the world’s most charismatic and iconic mammals,” Dr Johnson said.

“Sequencing the koala genome was a pioneering venture with risks and uncertainties, but its success has started a revolution with conservation at its core.”

The University hosted the annual Genetics Society of AustralAsia conference this week (1-4 July).

Great news for the Koalas!

Karen Feng - 44 minutes ago
is this an indication that we do not have enough land fornthe wildlife to thrive? theres this road from holt to Fyshwick that... View
News 1

A_Cog - 9 hours ago
Should the ACT get its own police force? NO! It'd be run just as badly as every other ACT Govt service. Instead of buying ser... View
News 18

wildturkeycanoe - 10 hours ago
I'm still waiting for surgery, almost up to my "expected" 365 days on the Category 3 list. This is after initially waiting fo... View
HiddenDragon - 13 hours ago
This year's Annual Rates Assessment Notices tell ratepayers that 31% of rates payments go towards funding the health system -... View
Opinion 110

chewy14 - 11 hours ago
Russianafroman, I go from being called a right wing nut job to a Socialist Comrade in the space of a few stories these days.... View
russianafroman - 14 hours ago
Capital Retro I don't watch or listen to the ABC. But it wouldn't surprise me. View
Jose Black - 1 day ago
The ACT Greens have a major policy on supporting the community sector (including youth and mental health services) and giving... View
ACT Election 114

Reno Minopoli - 13 hours ago
Clinton Berry which part of "Three decades’ population growth "needed" do you not understand? Kids that grow up replace tho... View
Capital Retro - 14 hours ago
Well, I can't speak for everyone but I have certainly always "paid my own way". In the early days of SMSFs the deductibility... View
ssek - 14 hours ago
The greens and pretty good economic plan are an oxymoron. View
Property 1

Capital Retro - 14 hours ago
Coffs Harbour has The Big Banana, Tamworth has The Big Guitar, Canberra will have The Big Battery. View
News 47

Sarah Fox - 24 hours ago
Zalan Filip we will have to check it out! View
Zalan Filip - 1 day ago
Sarah Fox the one Soph was going on about... reminds me a bit of the huge market thing in Castlemaine. View
Angela Doyle - 1 day ago
Jacinta Elliott yes please! View
Property 35

Follow the koala sculpture trail through Canberra in March

@The_RiotACT @The_RiotACT
Verity Ln Markets is meant to put Canberra on the global culinary map, but Zoya Patel isn't convinced. Is this another example of trying to shoehorn Canberra into some vision of a city that is isn't? https://t.co/uQA6HUAJZg (30 minutes ago)

@The_RiotACT @The_RiotACT
It’s a great week for live music with CBR’s jazz musicians stepping up as shows become increasingly sit-down affairs. Our #GigGuide has all the details https://t.co/LYnIt6PXE5 (9 hours ago)