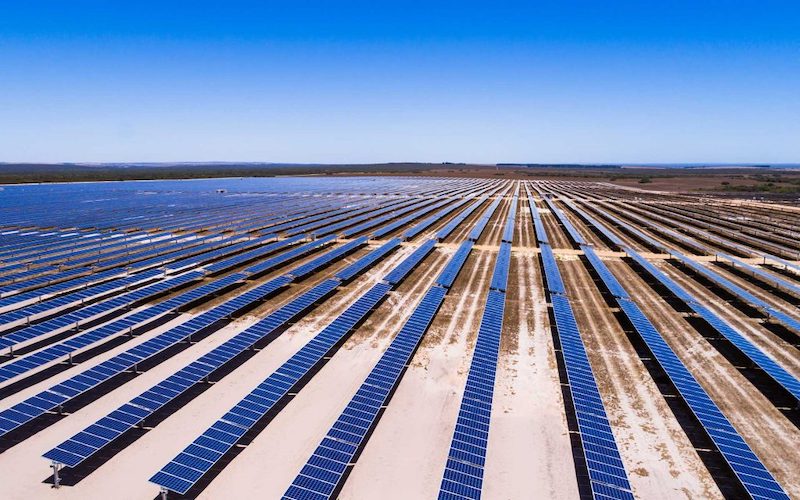 Australia’s aging transmission system is, according to many in the energy industry, holding back cheaper renewable sources. The Australian Energy Market Operator says the quick rise of renewables will need billions of dollars worth of new transmission lines to distribute energy to consumers.

The Flanery family-owned Hydro Power generates 30 MW from two power stations at Wyangala Dam near Cowra and Brown Mountain downstream from the Cochrane Dam near Bega. Hydro Power is also the sole investor in the proposed 26 MW Gidginbung Solar Farm north of Temora.

Gidginbung is stalled while AEMO and Essential Energy complete grid connection studies for the project.

Rule changes in February to the National Electricity Market require more onerous testing before connecting extra power to the grid, making the commissioning of the Gidginbung solar farm more expensive and time-consuming.

“On one hand this is understandable, on the other it is making it difficult,” Mr Flanery said.

“There are solutions, it’s just the Coalition Government has a view the markets should determine how everything – demand, supply and price – is solved. That is not going to work in this instance. I think they should step in and take some control of it, really.”

Mr Flanery says a portion of compulsory superannuation funds should be quarantined to pay for upgrading the national grid for renewable energy.

“Rather than that [money] simply invested in stocks and bonds and real estate assets, my view is a portion of that should be put towards infrastructure, and a 10-year bond yield should be paid for the use of that money, back to the superannuation funds,” he said.

Money is freely available in Australia due to low-interest rates, but in Mr Flanery’s opinion it is not being distributed to where it is needed.

“Power generators and consumers are losing money because of the out-dated distribution network which drains energy from the line as it moves from its source of generation to the user,” Mr Flanery said.

“You could solve the problem by building better inter-connectors with superannuation funds.” 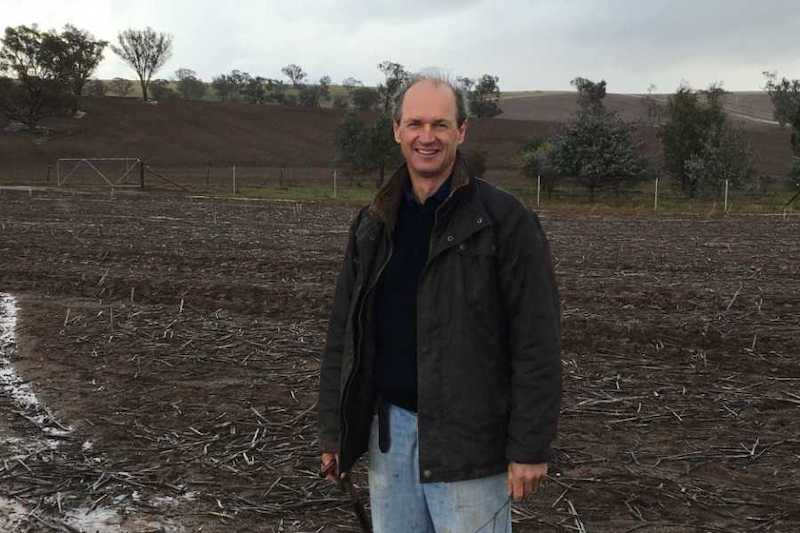 Mr Flanery said Australia was paying for a decade of in-fighting over the energy market. There was no investment, coal-fired generators knew their days were numbered and it made no sense for ‘lifetime extension’ investments.

There was no incentive for anyone to build solar or wind, “now we are throwing money at everything to try and catch up”, he said.

“A lot of government incentives are going into smaller programs. I do wonder whether if you put it towards central windfarms, distribution systems, solar farms and pumped hydro, it would be better. We are going to need back-up batteries and pumped hydro. If too much is done to undermine the pricing market, we run the real risk that the investment won’t stack up and that becomes a real problem for everyone,” he said. 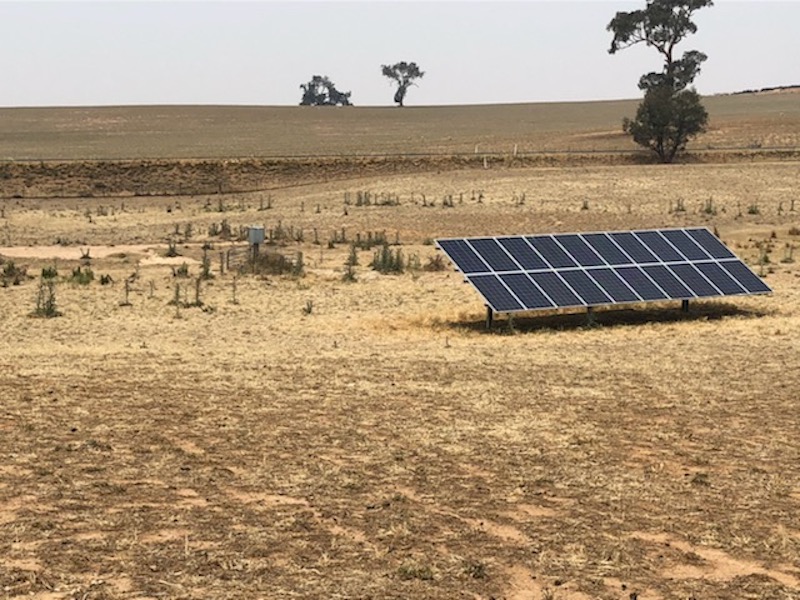 Tony Flanery makes good use of solar energy on pumps on his properties in the Hilltops district. Photo: Supplied.

But Mr Flanery has a positive outlook on the take up of renewable energy across Australia.

“In five or 10 years’ time, I think we are going to be surprised at how much we have cut greenhouse gas emissions by virtue of transfer to renewables. I am probably surprised the government doesn’t seem to be getting a lot of traction or acknowledgement of what is out there and the uptake,” he said.

The Flanery family’s Hydro Power was NSW’s first privately owned power operator when they acquired the Wyangala Dam power station in 1991, and the last one to purchase a power station from the NSW Government in 2016, the Brown Mountain Power Station near Bega. Wyangala generates enough power for Young, Harden and Boorowa.

No no no. I will change funds if this happens. Speaking as an engineer, too much renewable on a grid will ultimately lead to blackouts and unstable grid.
Coal powered electricity keeps this nation running, kill coal to support mythical climate change, you kill the economy.

I’m not a fan of Tony Abbott, but he got climate change correctly identified as “socialism masquerading as environmentalism”.

We have had no temp increase in 20 years – where is the run away climate change?

So, Flanery wants to use my money so he can make more profit. What’s the return on investment?

I don’t want the government stealing any more of my money to do anything.

If renewables need government funding where does that leave the argument from the Greens that renewable energy is cheaper than fossil fuel to produce?

How about we just build a cpl of new coal powered power plants to make sure we have electricity?!?!

Jason Metz much better use for the funds and of more value as an assett that produces wealth.

Yeah, let's invest in the most inefficient option that is already redundant...

Of course that’s why thousands are built all over the world with OUR coal!!!!

Tony Flanery can be the first one to donate. Save the planet yes use solar! YES! Ensure that the ageing population have enough to live on after their retirement... No, but they'll have solar so that's cheaper! FFS!

Divert military spending to renewables instead.

Get off it Flannery.

“I want the Government to use peoples superannuation to fund my business and pay to upgrade privately owned infrastructure”.

Pay for it yourself.

“……. Australian Government should use superannuation funds to pay for upgrading the national grid for renewable energy”

I was unaware that the government operated any superannuation funds. Can someone explain what is meant?

The Australian Government should not be using superannuation funds to do anything - it is not their money to use.

Barry Jones wow! We actually agree, leave the funds for the experts to manage to get best returns for their investors

Andrew Dale - 34 minutes ago
Rory Bourke I'm both mate 🥸🥴 View
Lucas Anasdow - 3 hours ago
The Left are pushing to have the Event Renamed as the Term 'Black' is deemed to offensive and upsetting for segments of the C... View
Rory Bourke - 3 hours ago
These days they don’t call it old, they call it experienced. View
News 3

grump - 2 hours ago
Except it's not a bakery and a hairdresser is it? It's something that involves significant emotion for people, and should hav... View
News 2

jwinston - 3 hours ago
Watch “The Planet of the Humans”, a documentary by Michael Moore, to see the lie of renewables and so-called green energy... View
Lifestyle 27

Chelsea Adhami - 4 hours ago
Any word on when the funeral will be? View
News 2

nobody - 5 hours ago
So the pool has been out of action for a year, and they are just concluding the tender process for repairs now, then the repa... View
Food & Wine 9

Ol L - 7 hours ago
How can Mr Barr tax them if their not here? Seems logical that the public service can be based anywhere, COVID seems to have... View
Sport 35

Pet owners who had paid to bury their beloved animals at a pet cemetery at a property that has since...
Lifestyle 27

@The_RiotACT @The_RiotACT
There have been some tough times for shops in Kingston, but with a Green Square revamp and new stores coming, business owners are rejoicing https://t.co/IzCITWUCAS (1 hour ago)

@The_RiotACT @The_RiotACT
The case against three teenagers charged with the 2020 murder of Canberra real estate agent Peter Keeley is continuing to make its way through the courts https://t.co/0rJNNSjgG7 (3 hours ago)