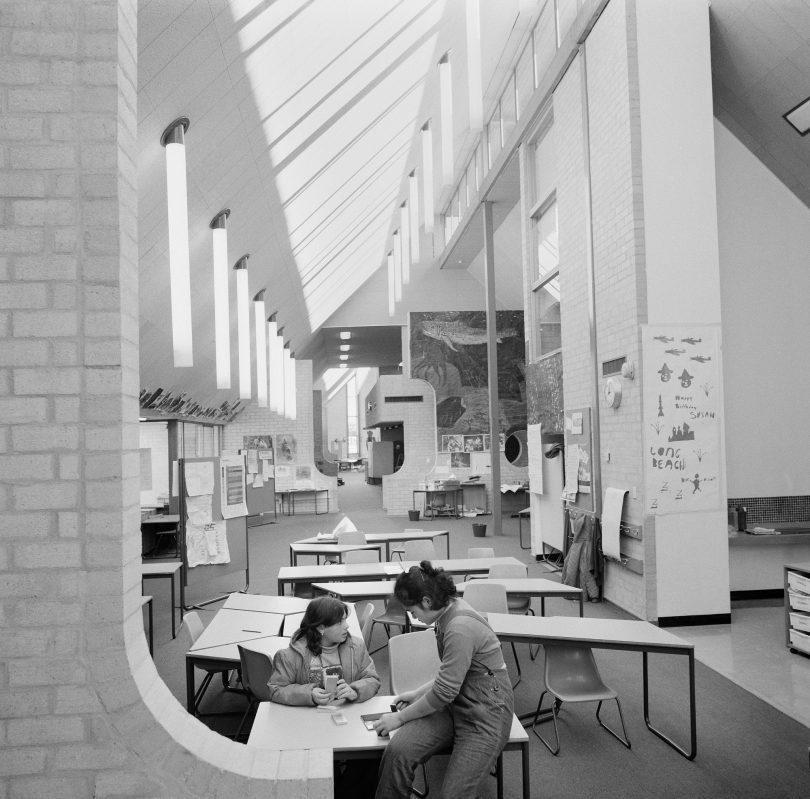 Giralang Primary school, designed by Enrico Taglietti. Photo: From the collection of the NAA.

Canberra is a city with a strong sense of heritage. Most Canberrans know about the landscape and design principles of the Griffin Plan and have embraced the ‘Bush Capital’ idea as an extension of 19th and 20th century ‘Garden city’ theories and philosophies.

But with so much renewal going on, we can sometimes pass by places with significant heritage value sitting in our local streets and suburbs without even realising how important they are.

The passing of renowned Italian-born Canberra architect Dr Enrico Taglietti (b. 16 April 1926 d. 3 May 2019) in recent days, however, gives us the opportunity to reflect on the impact this architect and his unique brand of modernism has made on how we connect with our community and use our public places.

More than a decade ago as a new mum with twin babies, I rediscovered some of the beautiful local community facilities that were designed by Taglietti. Important places of gathering in those early months of my sons’ lives were the Dickson Library (built in 1969) and Health Centre (built in 1980). It was in these buildings that I gathered with other new parents, received vital health advice and services, and introduced my children to the beauty of storytelling and the joy of books. I benefited from these beautifully designed spaces that placed people at their centre, supported my family’s health and wellbeing, and enabled me to meet and connect with other people who still remain important in my life.

In the blur of new parenthood, I didn’t reflect much on the spaces where this all happened. I didn’t fully appreciate how the use of sculpted concrete and extra deep eaves had been designed to connect with the local landscape or to respond to the harsh environment. I didn’t really understand how the large central spaces, quirky walls and windows, geometric forms, courtyards and gardens had all been carefully placed to enable me to engage and use these spaces for a range of needs – both personal and social.

However, in subsequent years I have come to understand how significant these everyday places are in the story of Canberra, thanks to an Italian visitor who fell in love with this vast land.

These are just two of over 30 buildings around Canberra that are Taglietti-designed. Others include the Italian Embassy, Giralang Primary and the War Memorial Annexe in Mitchell. There are also private residences, commercial buildings and public buildings around Canberra that were designed by one of our most famous adopted citizens. While many of these buildings were designed decades ago, they continue to embody aspirations around connection, beauty and functionality, and represent a significant evolution in what’s known as organic architecture (the style of architecture associated with Frank Lloyd Wright and the Prairie School, which the Griffins also practised). While renovations to respond to issues such as asbestos have impacted on the internal design and external appearance of these buildings and meant the loss of treasured design features, they continue to work in a way that serves a connected community, and conservation management plans help guide future interventions.

Enrico’s contributions have been widely recognised – both nationally and internationally. In 1979 he was featured at the Museum of Modern Art in New York – a very big deal for an Australian Artist. In 2007 he was awarded the Royal Australian Institute of Architects’ Gold Medal for his contribution to Australian architecture. In 2017 he was featured in the Design Canberra Festival with a full day international symposium at the National Gallery.

While Enrico shaped the physical space of our city, he also touched and influenced those who would come after him. Many local architects had the opportunity to learn from and work with Enrico and this influence continues to live on in buildings designed in our local suburbs.

Enrico once said: “We stand upon a verge of an abyss, the abyss created by the culture of egoism and puritanical righteousness. Men have lost their belief in the invisible. Architecture is no longer a WONDER but a temptation for the profitable. The aim of my architecture is to express the invisible, joy and music, silence, light and the desire to be”.

These words seem particularly important as we renew our suburbs and community spaces, and reminds us of the importance of ensuring future developments are designed in a way that reflects our aspirations as a community.

What are your favourite buildings in Canberra suburbs?

Want to find out more about the work of Enrico Taglietti? Ken Charlton’s 2007 book provides a great overview of his contribution to Canberra’s architecture.

I live in an Enrico house and it is, day to day a wonderful experience.

The ACT Chapter of the Australian Institute of Architects has copies of the book, ‘The Contribution of Enrico Taglietti to Canberra’s Architecture’ for those who are interested.

Pity the ACT Government didn’t listen to his direction on a town centre focus instead instead of a city centre focus for development and infrastructure.

Just like his buildings, people will look back in decades and say Taglietti had it correct all along.

I believe he was responsible for 54 Marcus Clarke St, with the interesting shaped concrete posts on the footpath. I heard - I don’t know if this is correct - he wanted verandah posts but was told he could not. So he incorporated these structures instead.

I knew he designed the Town House Motel previously on that site.

Sort of. The building standards at the time required the ground floor to have "colonnades" but structurally the building didn't need them so they were left off the original plan. In order to get the design approved, the freestanding posts were added to give the illusion of columns. Or that's how I remember the story.

I loved Giralang Primary because it was so different inside 😊

Dave N Ange Greer - 3 hours ago
Why is there no comparable list of Queanbeyan region sports stars....? Also how many James Bonds have come from Wagga 🤣 View
Dong Wong - 4 hours ago
look at the face on the dog hahaha View
Alan Byrne - 4 hours ago
Keni Kawaleva all day bra View
News 222

Julie Macklin - 3 hours ago
Benjamañana Fergusunshine The neighbours on your southern side likely won't. View
Kelly McGrath - 4 hours ago
Christine Young my mother and father inks got “free trees” from the govt 40 years ago! We now have the 2 biggest gum tree... View
James Vetos - 5 hours ago
Quite a few comments about price per tree. Does the total cost include the planting of the tree and ongoing follow ups to wat... View
Property 14

Clever Interrobang - 6 hours ago
It’s just politics, ending the lockdown or extending it will upset one group or another no matter what. It’s a delicate b... View
Clever Interrobang - 6 hours ago
The point of having inalienable rights is that they can’t be taken away by will of the mob. View
chewy14 - 7 hours ago
JC, Thanks for pointing out that the ACT is not following the National Plan. And no the ACT "plan" is not nearly the same as... View
Business 2