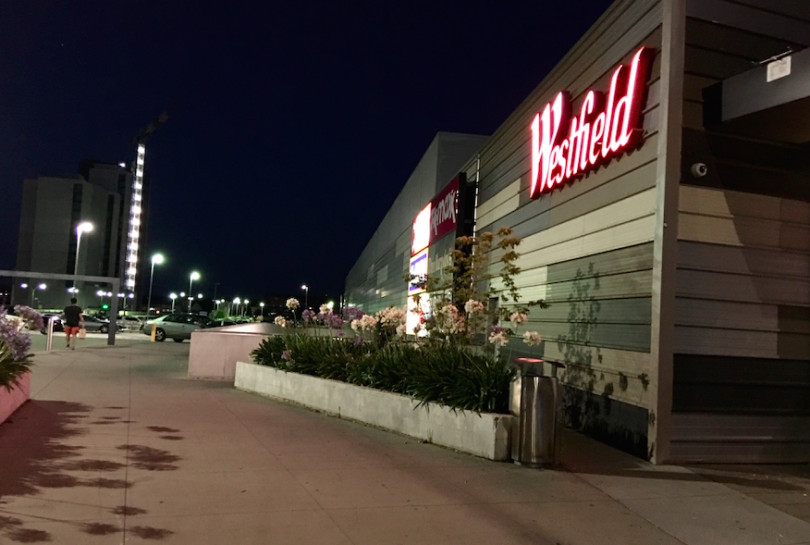 The location of the attempted robbery on 10 January outside the Belconnen Mall. Photo: Supplied.

The victim of an attempted bag-snatch outside Belconnen Mall last Sunday (10 January) says her impression of Canberra as a peaceful city has changed forever after the incident.

The 28-year-old woman’s best friend, who only wanted to be identified as ‘Bonnie’, told Region Media of the harrowing incident that also saw a good samaritan chase the alleged thief and return the stolen bag to its rightful owner.

The woman’s bike was also damaged during the incident.

The victim of the attempted robbery was unhurt but is calling for harsher punishment for people who damage people’s property and attempt to steal their belongings.

“My friend felt very scared, afraid and unlucky when a teenager wearing a black mask covering his eyes and black clothes and trousers dared to come up to her during the daytime at about 7:45 pm before sunset with a lot of people around outside the Belconnen shopping centre.

“Canberra was always a very peaceful city; however, after that incident, my friend’s impression of this city has forever changed.”

The attempted robbery has been reported to the police.

“I just hope that people can provide information to the police if they witnessed the process of the crime and that the government can set up a stricter law to make a harsher punishment or charges for those people who deliberately destroy other people’s property,” Bonnie said.

The victim was getting her bike that was chained near platform one around Belconnen Mall when she realised her bike had been damaged. She then saw a group of teenagers nearby, when one of them wearing black clothes and a black mask approached her and took her bag from the basket on her bike.

The woman ran after the thief, shouting loudly for help. Two men chased the thief for about 300 metres past the Yat Bun Tong and Sushi Musa restaurants heading inside the Belconnen car parking area.

One of the men returned with the victim’s bag but the robber had disappeared.

Bonnie said the incident will make her friend a stronger and wiser person who will not underestimate others.

“She told me she will treat the incident as a positive first-time experience and will learn how to protect her possessions more carefully on the bike, even during the daytime with a lot of people around,” Bonnie said.

“She is telling herself not to be afraid of bad people appearing in her life as they will surely end up being punished one day.

“I sincerely hope the government can set up a harsher law and charges for criminal robbery and bike damage as these two crimes always happen in Canberra … meaning that the criminals are basically not being afraid of the law at all.

“The government and the police really have to work on that more seriously to make the law more influential.”

I’d like to understand the extent of the problem. Transparency is lacking.

I love how people act surprised when this city has some of the worst crime I’ve ever encountered? I lived in Sydney for 8 years without an incident and moved here and had 12 instances of robbery and car vandalism/attempted theft combined in 4 years. We need to realise it’s not some magical land with no criminals!

Crime is not crime in the ACT if the perpetrators belong to certain demographics or racial cohorts.

Because of the extreme left wing insanity that infests the ACT Judiciary, so called thought crimes are being prioritized above actual crimes, like theft and burglary and this mentality is becoming concretized within that left wing community.

The ACT has a festering underbelly of anti social behaviour and criminality that is continuously covered up by those who do not want to reveal the identities of those involved.

Crime and punishment is a huge industry in Canberra.

Without crime, thousands would be out of work and insurance companies would cease to exist. The trick is to maintain a perception that justice is being applied appropriately.

Who’s getting punished, though, asides from law abiding rates payers in this city?

A racial or sexist epithet is treated more like GBH than GBH is.

It’s insane, the stupidity in this city.

Violent home invasions targeting keys for owners’ luxury cars are now out of control in Canberra.

Very few details are subject to media releases. A recent event in my neighborhood has changed the way residents are thinking as it never happened before.

No-one pays attention to crime in Canberra until it impacts them! We closed a Gungahlin based business over 10 years ago after it was targeted for crime. So many customers had no idea there was an issue, and then were gobsmacked when they learned what we had been going through.

Any statistics worth reporting about whether Canberra’s crime rate has actually meaningfully changed in recent years?

I sense that a specimen like yourself would choose not to believe any statistics that do not reach the same preconceived conclusion you’ve obviously already come to; I doubt you have been a victim of crime personally and because of that you choose not to believe that crime is on the rise.

This is a problem when a city expands the crime rate goes up.

Reality is crime is everywhere, the fact they picked her is bad luck…

My mate is 6’4 with a big build and most people at night give him space and some dude and 2 girls tried to mug him. What makes her special not to be a target. She was ether a target for some time or it was done on the spur of the moment. As we don’t have any more info we can’t say.

Sadly Canberra is a city and full of crime like any other town or city.

Belconnen – enough said. I would have thought tuggers but I guess u learn something everyday!

Dale Simpson mate dreambeyan is the land of the free

I really wish people would stop saying that police should hand out tougher punishments. That’s not the police, that’s the courts.

If the person/person’s are under 18 the protected by law😞 ..Moveing the cop station makes everyone a person on interest for this type of crim ..😡

Well, this what happens when you have a city with no police in it. Never ever see them patrol, never.

Tara Murray me either.

Tara Murray I have the opposite experience. I see them all the time in the city. Too many sometimes. Sometimes even driving through garema please. Maybe they just patrol the city.

Gary Crandell not me mate im a south side boy now.

Canberra has NEVER been a peaceful city. I was kidnapped in 1993. It’s nice that some people still have that illusion though.

Unfortunately there are scumbags everywhere..

Trouble is even if these low life’s are caught and charged they get off with a slap on the wrist and ‘don’t do it again’ .

Brad Fraser Lachlan Burke About environmental psychology and the city?