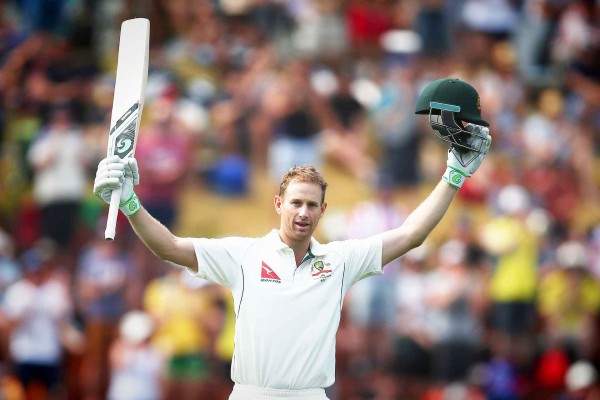 Voges’ test match batting average of 61.87 is second only to Donald Bradman (among batsman who have played a minimum of 20 innings). Voges was included in the 2016 ICC Test Match Team of the Year.

Voges was a latecomer to Test cricket, scoring a century against the West Indies upon his debut for Australia in June 2015, aged 35, making him the oldest cricketer ever to make a century on debut. He recorded a second century in November 2015, against New Zealand, and later scored 269 not out, 106 not out, and 239 in consecutive innings from December 2015 to February 2016, breaking Sachin Tendulkar’s record for the most runs between dismissals in Test cricket.

Right-handed middle-order batsman Voges led the Perth Scorchers to the BBL|04 title. His Test debut came off the back of a 2014-15 Sheffield Shield Player of the Year-winning performance which saw him make 1358 runs, the fourth most ever in a single season.

Starting the 2006-07 season with two Pura Cup centuries, Voges was a surprise call-up for the third Ashes Test that season. He made his Australia debut in an ODI against New Zealand in February 2007 and scored his maiden international hundred upon his return to the side after two years out against the West Indies in February 2013.

Cricket Australia has confirmed today that the match will become a double-header, with the ICC’s 16th ranked nation, Papua New Guinea, to take on an ACT XI at Manuka Oval on the same day at 2:30pm.

Tickets to the Prime Minister’s XI match are available now at www.cricket.com.au/tickets.

Adam Voges said he was honoured to be offered the opportunity to captain the PM’s side.

“It’s a tremendous honour to be selected to captain the Prime Minister’s XI and captain alongside the likes of past greats including Brett Lee, Mike Hussey Ricky Ponting and Chris Rogers,” the batsman said.

“Having played last year, I know how important this fixture is on the Australian cricketing calendar, and it is a great tradition.”

Pat Howard, Executive General Manager of Team Performance said that the match preceding the fixture of Papua New Guinea and an ACT XI was important to further strengthen cricket in the region.

chewy14 - 13 minutes ago
Even though I don't agree with the proposal, your example it not close to being a good comparison. You eating yourself to dea... View
chewy14 - 14 minutes ago
No point now, our Vax rates are too high to make it worth the effort. View
Fred Colon - 1 hour ago
Absolutely and it's a great thing. But it is ne in a hundred - over 12. View
News 43

Renea Hazel - 16 minutes ago
Judith Devitt he is an excellent school principal, this is disappointing :( View
Justin Watson - 25 minutes ago
Mat Lenaghan Equally where is the scientific data on the long term effects of Covid? The risk is still greater that covid wil... View
Kieran Angus - 1 hour ago
Rade Kosa yeah and? We get boosters of a bunch of vaccinations? Tetanus is a good example. View
Sport 132

Alan Vogt - 33 minutes ago
I have travelled and raced at a good number of mountain bike destinations in British Columbia (including Squamish, Whistler,... View
Jim Reid - 2 hours ago
ACT Govt doesn’t need any more $$ they’re literally the worst financial managers and they wouldn’t be transparent as to... View
Graham Smith - 2 hours ago
Michael good suggestions. Another consideration is certainty that the revenue from pay parking is well and truly sufficient t... View
Community 24

Lindi Loo - 2 hours ago
Are these two 'paid actors'? If not, they should be! Brilliant 😂👏... View
Emily O'Shea - 2 hours ago
Jen O'Shea watch the video in this View
Shannen McCann-Geiger - 4 hours ago
The wife looks super happy to be there View
Lifestyle 10

On the back of a historic deal between Australia, the UK and the US for a new fleet of nuclear-powered...
Best of Canberra 200

For many, the thought of visiting the dentist can come with a wave of anxiety. But even when you do...
Best of Canberra 53

UPDATED 5:40 pm: More COVID-19 restrictions are set to be eased after the ACT reached the crucial 80 per cent fully vaccinated...
News 43

@the_riotact @The_RiotACT
Former #gambling addict Markus Fischer used to win big, but then he began chasing his #losses and his life spiralled out of control. Now reformed, he's encouraging others to seek #help during Gambling Harm Awareness Week https://t.co/fzdCR1Zec7 (1 hour ago)