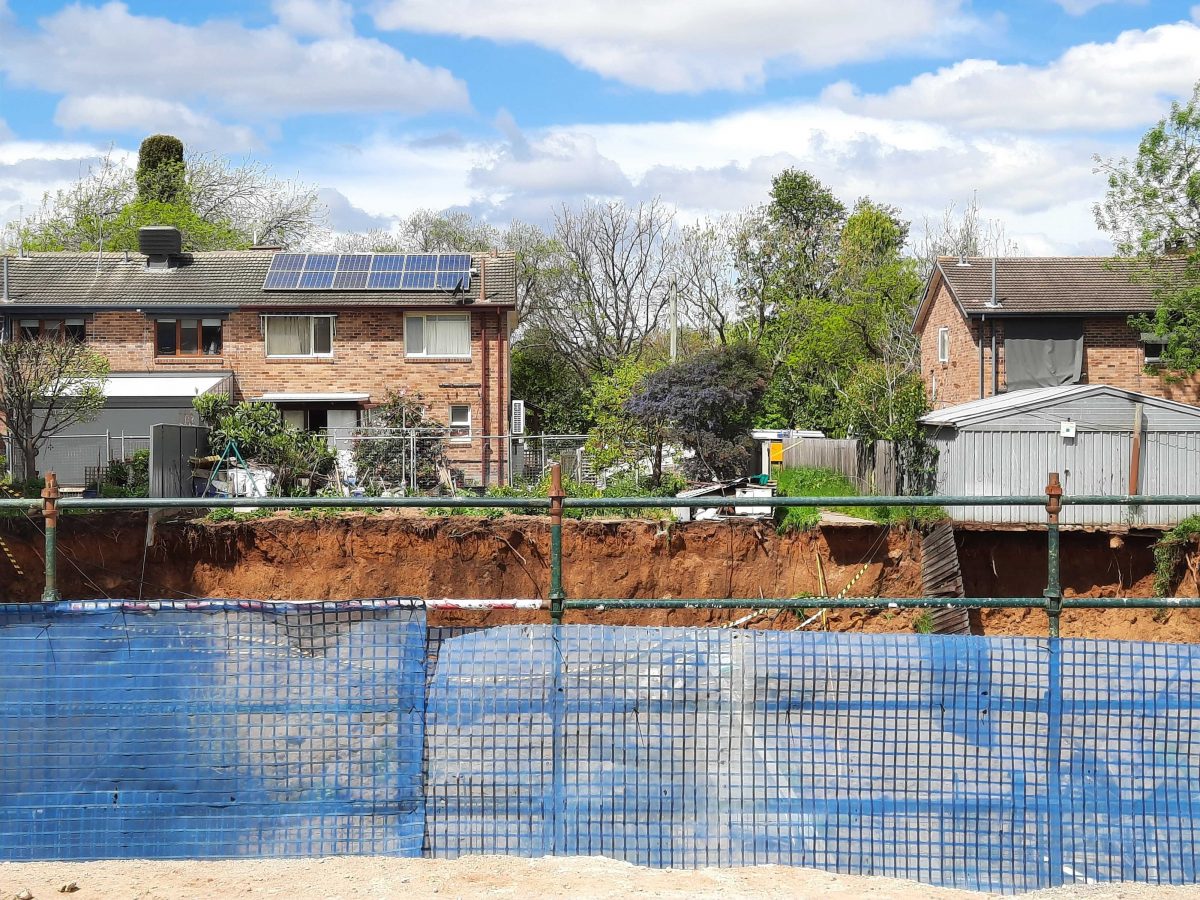 Staring into the abyss: the terrifying scene yesterday after the wall collapsed. Photos: Ian Bushnell.

Dickson residents woke to a loud bang early this morning (11 October) as a concrete retaining wall at a major development site collapsed, taking fences, sections of their properties, and a power pole and overhead line with it.

A section of the rear wall fell into the excavated site, along with parts of the backyards of residences in Lowrie Street.

The downing of the pole and wire blacked out 50 homes.

WorkSafe ACT was notified of the collapse this morning and inspectors were on site during the day.

A spokesperson said there were no reported injuries.

WorkSafe said it would not be making any statement until its inquiries were complete.

But the building regulator issued a stop work notice on the site and said it would be issuing an emergency rectification order. It flagged an inspection blitz across Canberra to ensure excavations are done safely.

The residents directly affected by the collapse were not at home yesterday afternoon, but it is not believed the properties are unsafe or that they will have to stay elsewhere.

The full extent of the wall’s collapse, which also took down a power pole and blacked out 50 homes.

“One’s fully lost its back fence and the other two on each side have lost a portion of the back fence. Someone’s also lost a shed as well,” she said.

“They’ve just put up some secure fencing in our backyards to stop our pets getting into danger and make sure that we’re not going into those areas as well.

“I think they responded really well and really quickly. They need to do to make sure everything’s safe. So now it’s just sorting out the mess.”

Evoenergy said the power outage occurred from 2:46 am, and crews were in Lowrie Street reconnecting mains power most of the day.

But a spokesperson said about four to six customers would need to be connected to individual generators for an unknown period.

“The duration depends on WorkSafe and other factors regarding the site,” the spokesperson said.

“It depends on when we could get in and recover the line and pole.” 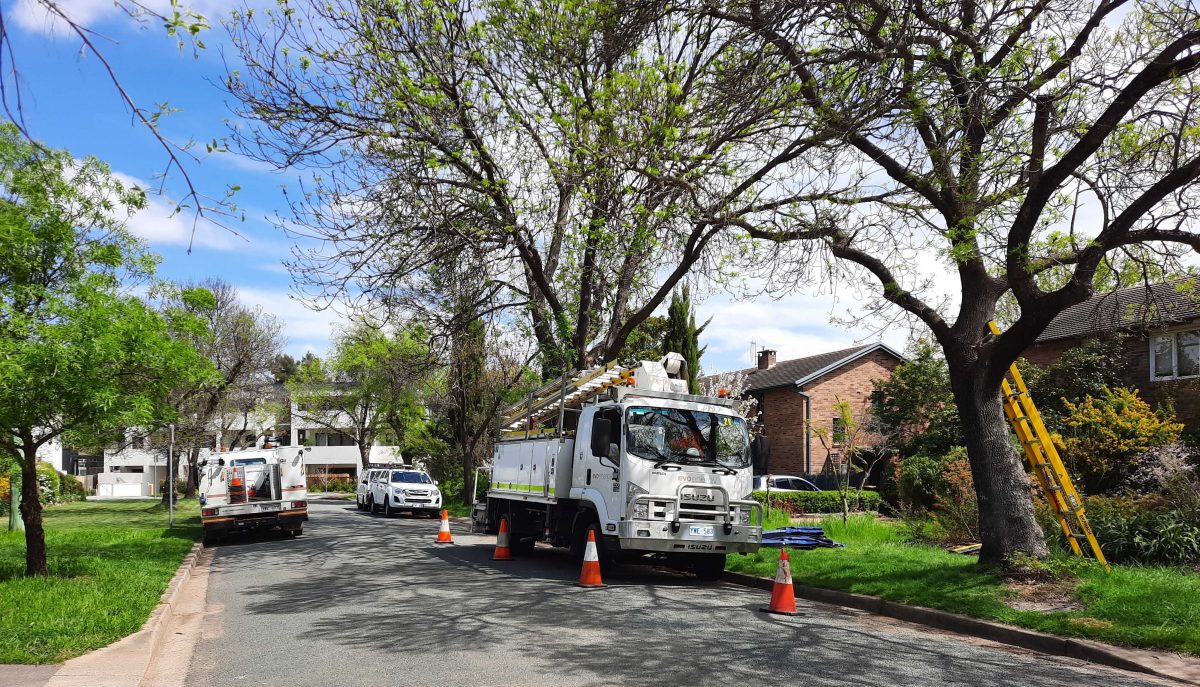 Evoenergy crews in Lowrie Street. Some homes will need generators.

Access Canberra issued a Stop Notice for the site under the Building Act 2004 and is preparing an Emergency Rectification Order under the Construction Occupations (Licencing) Act 2004.

It said building inspectors and the senior engineer attended the site and were working with WorkSafe ACT.

“I am calling on builders and developers to ensure that they have appropriate controls and structures in place for large-scale and deep excavations,” he said.

Mr Lhuede directed the senior engineer to engage with similar large construction sites in coming weeks to ensure controls were in place to manage excavation safety.

This would include conducting inspections across the Territory.

Minister for Sustainable Building and Construction Rebecca Vassarotti said the collapse reinforced calls for engineers and developers to be registered.

“I was shocked to see the images of the wall collapsing at the development site in Dickson. This is a really serious incident and Canberrans have a right to be concerned,” she said.

“It is vital that everyone involved in significant construction works are suitably qualified and that the community has confidence that such large works meet safety and building quality standards.”

Ms Vassarotti said legislation for an engineer registration scheme would be tabled in the Legislative Assembly next month.

“The ACT Government is also working on the implementation of a developer licencing scheme and look forward to introducing a public discussion paper in the coming months,” she said.

Art Group said in a statement that it was working with authorities and assisting affected residents.

“WorkSafe ACT visited the site earlier this morning and is working with relevant parties to investigate the cause of the incident,” it said.

“Works on the construction site on Block 46 Section 6 have temporarily ceased until further information is received from WorkSafe ACT.

“Further details will be issued in due course.”

The Dickson collapse comes after a similar incident at Geocon’s WOVA site in Phillip in August.

That collapsed wall took part of a roadway with it and caused a multi-storey car park next door to be evacuated.

I think the important point to remember is that the designers and builders on this project can’t between them manage to construct a simple retaining wall that does not collapse in a catastrophic fashion. Hands up who would like to move into an apartment they designed? When the government initiates a process of independent peer reviews we might see change. Until then good luck everyone. Shoring walls do not collapse because it rains. The anchors should be designed to perform in saturated soils.

“I was shocked to see the images of the wall collapsing at the development site in Dickson. This is a really serious incident and Canberrans have a right to be concerned,” she said.

A casual observer could be forgiven for thinking that Ms Vassarotti is some sort of community activist, not the minister with policy responsibility for this costly fiasco and that the government of which she is a part has only been in power for 21 days, or even 21 weeks – not 21 years.

The capacity of this government – across multiple portfolios and over many years – to be shocked by the utterly predictable, and then to expect applause for a sluggish and seriously belated response when the inevitable happens, is beyond belief.

This never happens in Canberra

Allowing builders to self regulate may also be the cause as well. If a builder doesnt know it been raining I dont think I want him building something I would live in

Self-regulate – what a joke…. most of them couldn’t even self-park legally, or put down the phone while driving. 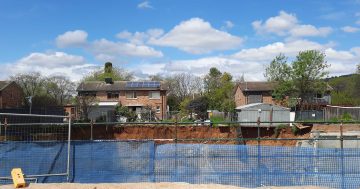 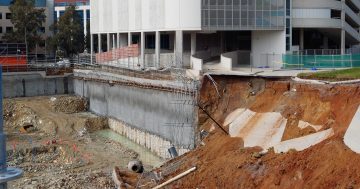