Canberra Airport is ready to lead the resumption of quarantine-free flights to New Zealand and will be pushing for a January take-off.

Chief executive Stephen Byron said New Zealand’s announcement that it would be ready to reopen its border to Australia in the New Year was the positive step the Airport had been looking for.

New Zealand Prime Minister Jacinda Ardern said that the NZ Cabinet had agreed in principle to establish a trans-Tasman bubble with Australia early next year, conditional on coronavirus case levels staying low and pending approval by the Federal Government.

It is unclear exactly when that would happen but Mr Byron said Canberra, as a COVID-safe city, should be able to provide a service almost immediately in 2021

”We’re well placed because Ms Ardern has said that she wants a test of 28 days free of community transmission and Canberra as a city has met that at least five times over, so we would be one of the safest places to start flights, and we’ll be pushing for early January,” he said.

The airport has been working on the bubble for months and Mr Byron said the Airport was ready to roll with the airlines and had approvals in place with Australian Border Force for the operation of the terminal for New Zealand arrivals.

”All we need is the permission,” he said.

Chief Minister Andrew Barr also welcomed the news saying it further strengthened its case for various airlines to consider adding a direct flight to and from Canberra to their schedules.

”Along with government officials and the Canberra Airport, I have been strongly advocating for the recommencement of direct flights between Canberra and New Zealand as it would help create jobs and boost spending in our respective economies,” he said.

Mr Byron said if governments waited for all cities to be free of community transmission for 28 days Canberra might miss out as the airlines would probably only fly to the major capital cities at first. 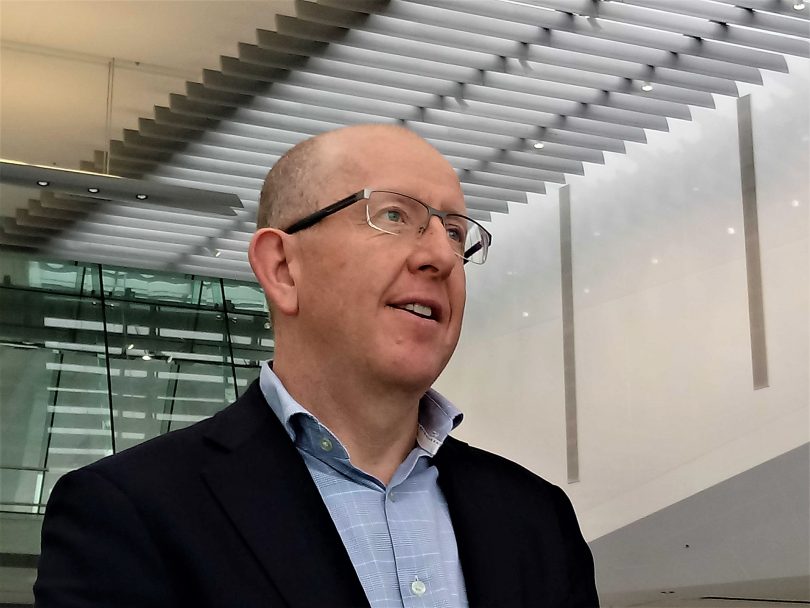 Canberra Airport CEO Stephen Byron: ”We would be one of the safest places to start flights, and we’ll be pushing for early January.” Photo: File.

”But why wait till mid-March for that to occur when you could be flying into and out of Canberra as a COVID-safe city from the first week of January?” he asked.

Canberra Airport had been ready to commence flights to Wellington back in July and Mr Byron argued there was now a strong mental health case to get people back in the air as soon as possible.

”There are lots of people in Australia and Canberra who are crying out for quarantine-free access to New Zealand to see family members, not only at Christmas but generally,” he said.

”They’ve been cut off from their family members and friends for almost all of this year.”

Mr Byron said there were many countries to which Australia cannot restore quarantine-free flights but NZ was not one of them, and there was a sense of unfairness among people about that.

”We can connect them with NZ and we should.”

He said there was a need to reunite families just as happened when the borders reopened in Australia.

”The first wave was not so much holidaymakers, it was people to see friends and family in crisis who needed their support,” Mr Byron said. ”The first wave was to see children and grandchildren that had been born during this period for the first time.”

Qantas, Air New Zealand and Virgin were all interested in a Canberra flight but only one of them is likely to take it up.

Federal Health Minister Greg Hunt said an agreement would be easy to reach with New Zealand as some Australian states had already welcomed Kiwi travellers.

All other states had already opened to New Zealand travellers, although Western Australia requires 14 days’ quarantine on arrival.

New Zealanders have been able to travel to Australia since October, without going into quarantine in certain states, but not the reverse.

W00T! Before March please – so we can do Crowded House in Queenstown! 🙂

Darren Sault I feel like I should invite myself to this.

Chloé I shall visit! All the time

Not really up to Canberra airport to decide a January launch isn’t it? They would need to convince the NZ ministry of health, ministry of tourism and PM&Cabinet to make it happen.

Fingers cross, cause I can use a Skiing holiday next winter. Queenstown anyone?

Nick Anderson well Canberra has been covid free (community transmission) for over 4 months. So why couldn’t we.

Where does it say anything about Canberra Airport making the decision, Nick?

Sarah Bayly-Jones i am waiting till Beervana