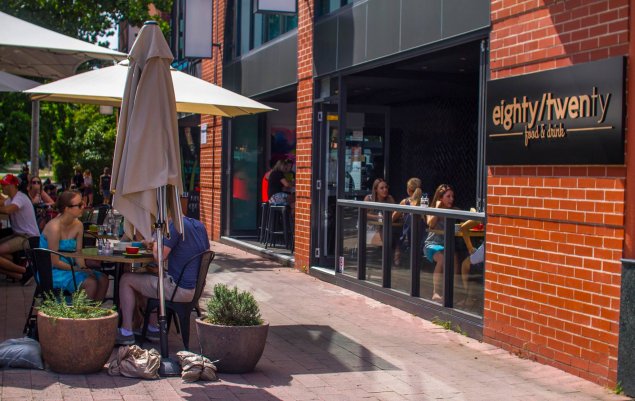 When eighty/twenty opened its doors not too long ago, I thought it was going to be confusing having a restaurant called eighty/twenty directly across from Eightysix, but the two have definitely set themselves apart.

eighty/twenty has been all over my Facebook feed since opening, with people raving about the healthy, well balanced menu.

The eighty/twenty concept is about 80 per cent eating well and 20 per cent indulgence. It’s about serving up food that makes you feel good, is wholesome and nutritious, and tastes delicious, whilst getting the balance right.

When a friend suggested we meet at eighty/twenty for breakfast I jumped at the opportunity; I was probably the last Canberran to dine there! The weather was perfect, so we decided to sit outside in the sunshine. We read over the menus and headed inside to order (there is no table service).

I had been told that the braised beef in aromatic spices and tomato sugo, served with buckwheat, roast vegetables and charred eggplant salad (approximately $18.00) was divine but I was really feeling like eggs, so I decided to order poached eggs, toast and avocado.

Whilst we were in line to order, I noticed the sweet cabinet. Instead of being filled with the usual suspects such as cupcakes, the eighty/twenty cabinet is filled with gluten free muffins and different types of “raw” slices that are gluten free, dairy free and vegan for $4.50 each. It was a tough choice but I went with the raw coconut rough slice. 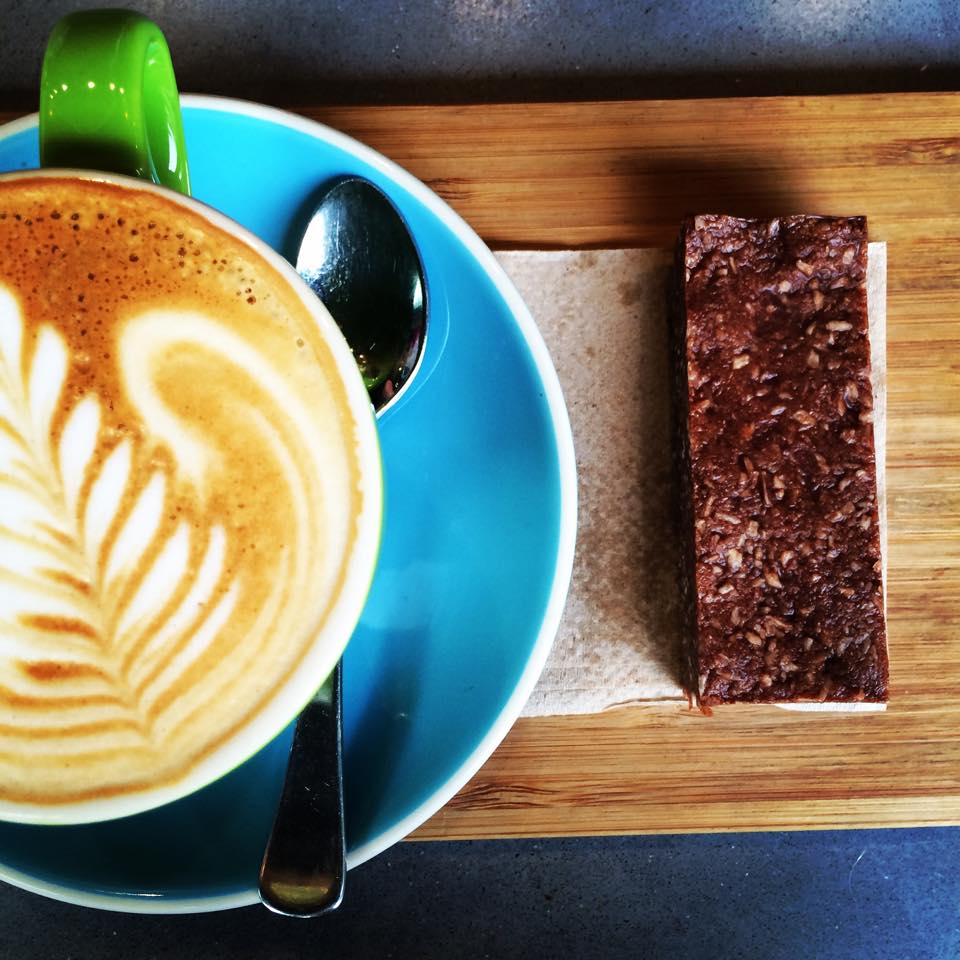 We sat back down at our table and I dug into the slice. It was quite oily from the coconut oil but it was still nice and a good alternative for cake or caramel slice.

The meals came out quickly and I immediately had food envy. Why didn’t I order the braised beef?! It looked and smelt divine. My friend tells me it was exceptional! My eggs on toast were okay, but they were just eggs on toast. 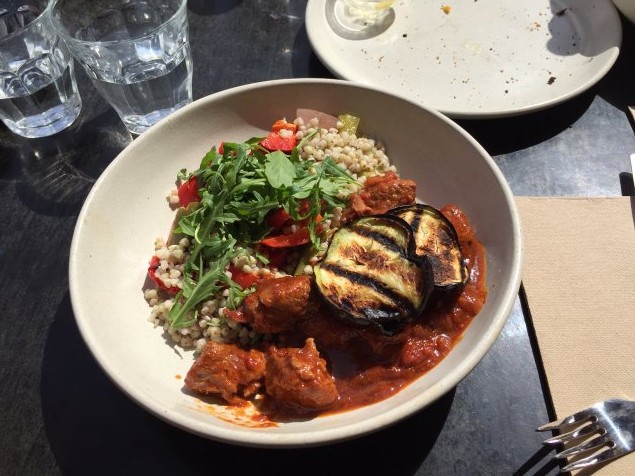 I really like the concept of eighty/twenty and I know a lot of people who love it and eat there regularly. It is probably a little too different for me but I can still appreciate the concept and the quality of the produce.

Don’t let my review decide for you though, I’ve been told I’m a picky person. eighty/twenty is located at 1/18 Lonsdale St, Braddon is are open Monday – Saturday 6am to 4pm and Sunday, 7am to 4pm.

I went to eighty twenty for breakfast for the first time this morning and ordered the green nourish bowl (asparagus, cauliflower, kale, zucchini, tomato and capsicum pesto served with a poached egg). The place was packed, even at 7.15am on a Wednesday morning.

Great food and good service – we waited around five minutes for coffee and ten for our meals.

If you’re not a very adventurous eater or just like pancakes or bacon and eggs for breakfast, perhaps this isn’t the place for you, but if you don’t mind walking on the wild side before lunchtime then I’d highly recommend it.

Didn’t try the slices in the display counter, but they looked so good I think I’ll have to come back for another visit very soon.

I went here once. It was a Saturday and we waited probably 50 minutes to get our meals. I had something with eggs (can’t remember exactly what) but it was bland and not worth the 50 minute wait. So disappointing because I, like you, see people raving about it all the time!

Dani Hache - 2 hours ago
Whilst this is 100% accurate, it cannot be fixed with the government failing to invest in an APS workforce. These businesses... View
Bill Bloxham - 3 hours ago
Been going on since Adam was a boy View
David W Jones - 5 hours ago
Just look at the number of contractors that just keep getting extensions or renewals with no questions asked! View
News 6

jam - 2 hours ago
The tram is more easily accessed by more people as it encourages dense development within its reach. It isn’t really possib... View
bj_ACT - 3 hours ago
The issues with the Bus route changes and the loss of bus stops for Tuggeranong in 2019 were obvious to anyone with half a br... View
Winkie Wee - 5 hours ago
I'm lucky in that I live within a short walk to either the R4 or R5 buses. I use the bus quite a bit unless both of us need t... View
Breaking 4

jam - 2 hours ago
That said, though, bikes are required to slow to around 10km/h before crossing - a bike crossing at the otherwise speed limit... View
jam - 2 hours ago
It is not “bugger all inconvenience” it actually makes a big difference when it is your commute! When I drive past a cros... View
liberalsocialist - 6 hours ago
What a disgrace. And while in no way taking away from this cowardly act, I have come from NSW where we are told to dismount a... View
News 161

Jimbo Lambert - 3 hours ago
Areas in Gungahlin haven't been mowed for at least 6 months! How hard is it to use our high rates money to employ some more m... View
Jimbo Lambert - 3 hours ago
Randy Goldberg you mean 6 months later? You must live in a more affluent area than Gungahlin, as it seems we have been alloca... View
Frank Arnold - 5 hours ago
Ohhh myyy Goddd !...Crooked pavements!...pot holes in our roads!...and now it's long grass !!!! FFS we hardly had any 3/4 yea... View
Community 6

kenbehrens - 6 hours ago
That makes no sense. Your comparisons are 20-25 years apart. The "new" bus route takes longer because it services a bigger ar... View
bj_ACT - 6 hours ago
Not sure about the adding 10 minutes to the 333 journey by changing to go past College St and UC. The change Only added 1.2km... View
michael quirk - 11 hours ago
Yes,but it is by no means certain that light rail stimulates urban redevelopment more than BRT. Much depends on design of the... View
News 1

JS9 - 13 hours ago
All this highlights again is a) How ridiculously stupid the retail electricity approach in Australia is in general (basically... View
show more show less
*Results are based on activity within last 7 days

Hot in the City: The Downer cafe that’s going gangbusters!

Hot in the City: Ramen get it at Manuka’s newest noodle spot

@the_riotact @The_RiotACT
Hot in the City: You knead a box of The Bite CBR’s pretzels in your life! https://t.co/6b3M1kuAyH (3 hours ago)