What is wrong with the stupid kid tagging “Nokia” 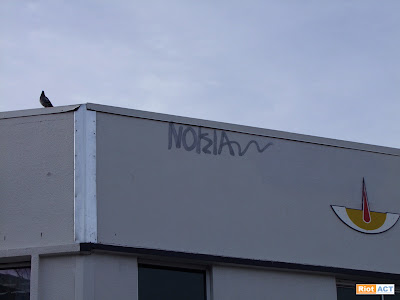 The resort of someone with nothing to say simply screaming to the world that they exist and care nothing for the property of others. Pathetic really. (As opposed to stencils, messages, and street art which may be vandalism in some cases but at least have other merits).

But if I may don my grumpy old man hat… what sort of retard goes tagging the name of a multinational electronics manufacturer famed for making adequate but slightly dull mobile phones? And these things are all over Civic.

You go to all the trouble of climbing up to paint on that wall and you’ve really got nothing better to say except “I’m here and I’m dumb”?

Maybe it’s honestly a form of expression, except nowadays the kids seem to be into commercial crap instead of veiled commercial crap that made you want to break things and whinge about corporations that provided you with every comfort you wouldn’t give away. After that, you’d turn into a raging left-wing young-un working in a supermarket before becoming a depressed office life-form, then becoming a grumpy old man and shooting yourself.

Life is going to be fun from here…

yea, ive never been much for tagging/bombing but it’s a part of the whole graff scene and has it’s place i spose. its a pain because it’s generally first thing writers learn to do and as such you get many pathetic looking things going up on walls in everyones face which puts most people off learning anything else about it all. i agree with you about banksy having good crossover appeal but so do many other writers. i know of a fair few writers who have gone on to make a career for themselves using the skills they learnt from graff. i think banksy is just very well known around the world and is kinda seen as a first port of call when it comes to mainstream society looking at graff. id hate to slag him off as i have much respect for him and what he does, i guess i just prefer the lesser known artists around.

clearly says nokia. banksy is interesting, but there is far better than him (for diff reasons) even in oz.
if you got some time on your hands google some of the following writers and see what ya think puzle (melb), broke/exit (canb/bris/syd), caib (syd), dmote (syd), phats (canb) smart (canb). they are a few guys who were (maybe still are) doing some pretty cool stuff. they are just a few names that sprung to mind, theres hundreds more really impressive writers in oz and many different styles. theres a few decent graff websites for aussie stuff, not sure if it’s still around but there was a pretty good site based in canberra that is worth a look, but i dont remember the addy.

Hey good call Luke! I guess I should have mentioned some locals. I think Banksy is a bit more crossover and has some mainstream appeal which is a good way to turn people onto the artform but we definitely shouldn’t stop there and should get out and see what’s going on in our own backyard. I know that there is definitley some better stuff out there than the crap that this guy has put up. I hate meaningless tags, but I love a nice big, bright, detailed piece of graffitti.

Or Finnish but not Finish

And that would be SUOMILAINEN

And allow me to correct my heinous spelling error…

Perhaps this artisic fellow is simply a patriotic Finn…

The name Nokia is said to derive from the Finnish word, nokinäätä, a marten, an animal that inhabited the banks of Nokianvirta. The old Finnish word nois or nokia meant a black-furred sable. After the sable had become extinct in Finland the word was used to refer to other dark-furred animals such as the pine marten.

By 1922, the Finnish Rubber Works had acquired a majority holding in the Nokia Company and the Helsinki-based Finnish Cable Works. This can be considered the dawn of the present Nokia Corporation. Of these three pillars, cable manufacturing is regarded as the foundation on which the present electronics giant stands.

I think Pesty had tumbled this tagger’s game at #32: it’s the pidgeon. Returning to the scene of the crime, standing there, puffing his chest out.

Send that photo off to the AFP, JB. They’ll get the Flying Squad onto the case.

Really? I must be getting old.

clearly says nokia. banksy is interesting, but there is far better than him (for diff reasons) even in oz.
if you got some time on your hands google some of the following writers and see what ya think puzle (melb), broke/exit (canb/bris/syd), caib (syd), dmote (syd), phats (canb) smart (canb). they are a few guys who were (maybe still are) doing some pretty cool stuff. they are just a few names that sprung to mind, theres hundreds more really impressive writers in oz and many different styles. theres a few decent graff websites for aussie stuff, not sure if it’s still around but there was a pretty good site based in canberra that is worth a look, but i dont remember the addy.

What happens if you don’t have enough potatoes?

Nokia is actually quite artistic.

See the squiggle on the ‘k’… it’s expressing his/hers winding road in life and the difficulties encountered on their journey. Then everything returns to normal with the ‘i’ and the ‘a’ almost makes it, but that last squiggle shows how life is throwing another another curve ball at him/her.

Or possibly the artist is simple against ‘Kia’ automobiles… hence ‘No Kia’. This could be attributed to a deep love of dogs and how ALL Koreans eat dogs on a regular basis- this is not a racist assumption, just a ‘racist kid from the streets of ACT Public Housing’ assumption.

But most likely the squiggles come from being afraid to hold a can of spray paint since the person that wrote it (like all ‘taggarrrzzzzz’) are wigga g’s compensating for not having enough potatoes in their diet.

“I always thought it was upsidedown VISION.”

Of course, the fact remains: tagging is dumb.

Julie Macklin - 6 hours ago
Tim McMahon Road worthy checks! When was the last time your car had a road worthy check? It's been years since any car of min... View
Tim McMahon - 9 hours ago
let’s put rego and insurance on these bikes as well as road worthy checks every year just like cars trucks and everything e... View
Colette Robinson - 14 hours ago
Adrian Fui Fui Moy but the path *is* being used for racing. Pedestrians and slower cyclists in either direction are merely ob... View
Opinion 170

Phil Cowan - 8 hours ago
The 26th Jan is a Public Holiday because on the 26 Jan 1949 because we ceased being British subjects and became Australian ci... View
ghutch - 19 hours ago
A lot of good comments. Why don't we celebrate Oz Day on 1 Jan. Yeah I know you all still asleep from new year eve. But is th... View
Jenny McInnes - 19 hours ago
David Johnson it most likely was a public holiday there then View
Property 10

Peter Curtis - 16 hours ago
Not to sure what a "Canberra mentality" would be but as long as we surrender the principle of solidarity for the belief that... View
Food & Wine 1

Jackie White - 20 hours ago
Thank you. I never walk around the lake with headphones precisely because of the risk of collision with a cyclist View
James Messervy - 20 hours ago
Jackie White no, I always ring my bell or call out.... View
Community 7

Susanne Jennings - 20 hours ago
Great to see it so successful- well done! View
show more show less
*Results are based on activity within last 7 days

@The_RiotACT @The_RiotACT
Have the voices of post-Vietnam veterans been missed in the fight over the War Memorial expansion? Some veteran organisations say yes https://t.co/UC34DwlGFC (12 hours ago)