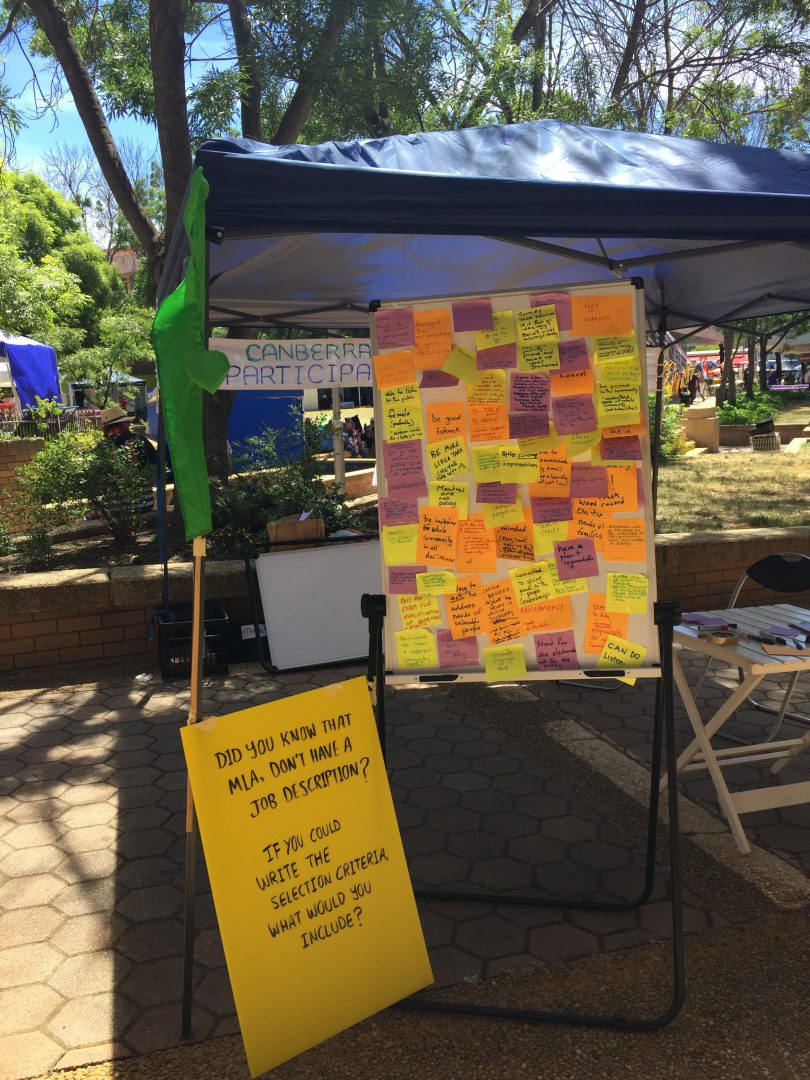 Canberra Alliance for Participatory Democracy at last week’s Southfest asking the community what they thought about the job of our local pollies. Photo: Supplied.

While we may be pretty frustrated and disheartened by the state of modern politics, we don’t often reflect or articulate what we think the job of our elected representatives should be. While the community is clear about what it doesn’t like about current politics, we don’t often have a dialogue and discussion with our political representatives about what the job is, and how it should be done.

It’s a job with the most public and inclusive of job interviews and recruitment processes; indeed, everyone in the electorate gets a say in who their representative is. However, once someone gets the job, there is no clear position description, and there are no KPIs beyond the next electoral result to provide an indication of how well (or not) an elected representative has done in the eyes of their constituents.

Given this, here in Canberra we are lucky that local group, the Canberra Alliance for Participatory Democracy (CAPaD) has been engaging with our local Members of the Legislative Assembly (MLAs) to find out what they see as their key roles, and how they go about doing their job.

Over the last few months, they have been interviewing local MLAs and pulling together these reflections to give the rest of us an insight into the job of an MLA as they see it, as well as some of the challenges and opportunities.

The social researcher roles comes from the opportunity to engage with a wide range of community members, and working out how these perspectives fit into the broader context of community need.

In relation to a caseworker, this is primarily around supporting individual constituents to respond to particular issues and challenges.

Advocacy occurs where there are issues affecting groups of the community that need profile and resolution.

Finally, the roles of policymaker and lawmaker are primarily led by Government Members although all Members play a part through private members bills and committee work and all, of course, vote on the legislation that goes through the Assembly.

The report highlights some of the real challenges about some of the busyness that flows from these roles. MLAs that have ministerial roles and are members of the Executive reflect that this core role can sometimes make them seem less visible or accessible – both in the community generally, and to listen and respond to individual community members who have specific issues and concerns. Those who get involved in parliamentary committees and reviews reflect that this unseen part of decision making can be some of the most productive work, and contribute significantly to making good policy and law.

Key dilemmas explored through this discussion include how evidence and information is collected from the community. It also raises the issue of how our local elected representatives ensure that they are governing for the whole community rather than the privileged few with access and influence.

It also raises the question of how we can do better in having an ongoing, deep and meaningful dialogue across the community. Interestingly these local representatives also recognise the importance of our job as citizens, with the report noting the clear message that active citizenship is vital to a strong representative democracy and should be facilitated.

CAPaD is particularly interested in looking at deliberative democracy tools as a way for communities to work through issues where there are disparate views, by providing access to the evidence and research, creating safe spaces to hear a variety of perspectives and creating the space to work through issues and collectively work on solutions. This is something that they continue to discuss with our current crop of elected representatives.

In a small community, we probably have more access to our local elected representatives than many other communities, even though we have fewer politicians than most.

We can ring up our Chief Minister each fortnight on the local radio, many of us are part of community groups that regularly engage with members of the Legislative Assembly and we often bump into them at the local shop or local school. It’s incredibly helpful to know how they see their roles, and to get an insight into how they are all working to represent our interests. While may not agree with all of their views or even how they are doing their jobs, it is great to hear from them and to see them engaging with groups such as CAPaD.

I think we need to have more discussion about how to build a stronger relationship between our elected representatives and we, the people. What do you think?

A copy of the CAPaD report can be accessed via their website.

Rebecca is an active member of the ACT Greens and stood as a candidate at the 2016 Territory Election. She signed the CAPaD Charter of Democratic Commitments unamended.

It's very important that the ACT community councils give all 5 MLAs equal coverage. The Belconnen Community Council has not had equal coverage of all Ginninderra local MLAs. The BCC gets about $12,000 pa of rate funds/govt funds, so they should cover all MLAs equally. The Riot Act could study all community council Facebook pages and see how many posts per MLAs are shared, and see if they are being fair or not. They get rate funds and should be as fair as possible. A rule of one post per MLA per week would be so easy and not hard at all. This issue is rarely checked, why?

Canberra's MLAs & administration have a crazy task being a hybrid of state government & local council. Without evidence-based reform across Australia to transition to a two-tiered governed country the ACT will always struggle. Having said that I see a genuine desire to work hard & achieve for the community in the MLAs I have had cause to interact with.

What do all those candidates really believe? Here’s how to find out