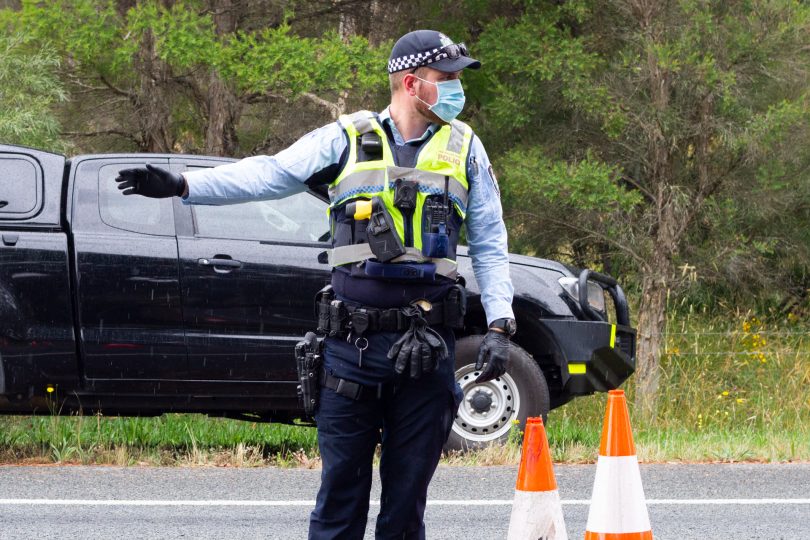 A COVID-19 task force was set up to manage compliance with stay-at-home orders during the ACT’s COVID-19 lockdown. Photo: Dominic Giannini.

The arrival of the COVID-19 Delta variant in the ACT was a “game-changer” for policing, Acting Chief Police Officer Peter Crozier told a budget estimates hearing on Wednesday, 27 October.

It was recently revealed that major operations into organised crime and fraud had to be shelved so police officers could conduct COVID-19 duties such as door knocking and border compliance.

At the height of lockdown, more than 110 police officers were diverted into these teams, although Assistant Commissioner Crozier said all officers had a responsibility for ensuring COVID-19 compliance.

More than 600 directions to leave the ACT were issued throughout lockdown.

During the more than two months of lockdown, ACT Policing received around 2500 calls about suspected breaches of public health orders, although only six arrests were made.

Much work focused on the management of the ACT’s porous borders, with more than 50,000 traffic stops undertaken during the course of lockdown. 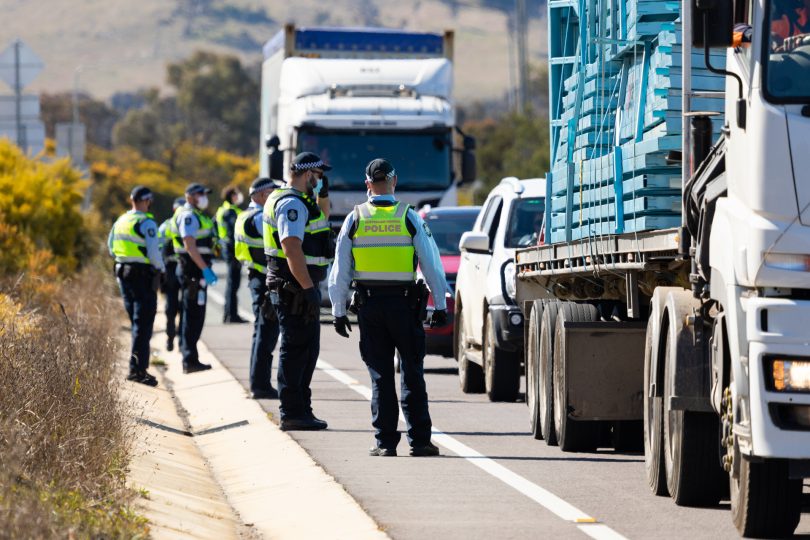 Assistant Commissioner Crozier told the committee that two years of COVID-19 had tested officers’ “resilience, professionalism and dedication in new ways”, but he thanked Canberrans for their community-minded spirit.

“At all times, our strategy has reflected an ‘engage, educate and enforce approach’ in line with a broader ACT Government COVID-19 response,” he said.

Assistant Commissioner Crozier said police “shifted to a strong enforcement posture only when it was warranted”.

“It has been pleasing that for the most part, our ACT community has followed the restrictions, and understood and accepted their compliance requirements after conversations with police,” he said.

The majority of arrests made for COVID-19 breaches were in conjunction with arrests for more serious crimes.

Assistant Commissioner Crozier noted the priority for ACT Policing is always the “safety and security of the community and workforce” and this had only become more important since March 2020.

A COVID-19 task force had first been first established in the ACT in July 2020 to “provide a centralised and coordinated response to both business continuity and enforcement action”.

Australian Federal Police Association (AFPA) president Alex Caruana had previously estimated around 60 officers had been diverted from their usual teams to this task force.

Mr Caruana said while the AFPA is supportive of the need for COVID-19 compliance checks and activities, he acknowledged the police force doesn’t have the workforce capacity to support both these and usual activities.

“It’s the investigations which take longer that are being stood down,” he said.

Assistant Commissioner Crozier noted that while police resources did have to be diverted to COVID-19-related issues, it had been “the pressing need” and “we will need to continue to do that because our sense is that Delta has not gone away and the challenges that exist will continue”.

However, he said all changes to operations had been made after a risk-based assessment and “resources were always available to support and protect the community”.

Assistant Commissioner Crozier also made the point that some normal activities, such as patrolling large events or public gatherings, did not need to occur during lockdown which allowed for the opportunity to redirect these officers.

He stressed there would be a slow return towards “business as usual” and greater in-person engagement with the community.

It’s still unknown how many officers were forced into quarantine throughout the ACT’s COVID-19 lockdown. A spokesperson for ACT Policing had previously said this information could not be made public for operational reasons.

Border compliance activities ACT Policing undertook in conjunction with the Australian Defence Force have now come to an end.

One Response to What was our police force up to during COVID-19 lockdown?
Filter
Showing only Website comments

Shane Scott - 7 minutes ago
I have seen more or the public with there house hold mower mowing the streets around Dunlop then I have any services unfortun... View
Sally-anne Hately Radcliffe - 33 minutes ago
Never seen Canberra look so poor and unkept. Absolute disgrace View
Herman Riet - 1 hour ago
Paul Muscat There is a group on Northside in the new suburbs called Friends of the Park I tried ringing & leaving message the... View
News 22

Jilly Beans - 1 hour ago
Michael Miitze yes true- consultants always look so surprised when you take them to task on something! View
Michael Miitze - 1 hour ago
Jilly Beans agreed, but the APS does itself no favours. They are so passive and poor at contract negotiations and management. View
Ben Stevens - 3 hours ago
"the increasing reliance on labour hire and consultancies is based on Coalition hostility to public servants and the public s... View
News 1

Capital Retro - 4 hours ago
I find it "deeply troubling" that there up to 30,000 ACT public servants. I wonder where they all work because these numbers... View
News 9

JC - 13 hours ago
As was the case with delta the over reaction as you put it is just a pause to buy time to see how big a problem it really is.... View
HiddenDragon - 16 hours ago
With Australia's international border being "thrown open" (as tonight's TV news reports are reminding us) from next Wednesday... View
jorie1 - 17 hours ago
Close the international borders to everyone but Australian citizens! And have strict quarantine for Aussies coming in here .... View
Opinion 60

Brianna - 15 hours ago
That is a very interesting question. My husband and I are both double vaxxed and yet we both got covid back in August.... View
Mike Carroll - 16 hours ago
How many of the new cases are double vaccinated? View
News 17

Capital Retro - 17 hours ago
Looks better than a Tesla any day. View
show more show less
*Results are based on activity within last 7 days

For decades, if you ever needed a window winder handle from a 1957 Chrysler Royal, there's been just one place...
News 22

@the_riotact @The_RiotACT
The @CPSUnion is concerned about an ACT Government data breach that potentially enabled #sensitive health data of 30,000 ACT #publicsector employees to be publicly available for three years https://t.co/N5EhD2peS6 (2 hours ago)