What you need to know about the National Multicultural Festival

Canberra’s annual National Multicultural Festival will celebrate it’s 21st birthday in the centre of Canberra this weekend, starting at 4pm on Friday afternoon. #NMF2017 (also known as “meat on a stick day” by Canberra regulars) is set to provide a fun and free family-friendly weekend that includes activities for everyone, music shows, more food and drink stalls than you can possibly handle, as well as dancing and cultural celebrations.

Australian star Kate Ceberano headlines the festival on opening night supported by Andrea Kirwin and Band.  With her soaring voice and Aria award-winning melodies, Kate has been a fixture of the Australian music scene since the 1980s and has entertained crowds at festivals, major concert halls, on TV and in clubs across the nation. In 2014, Kate – whose cultural heritage includes American, Portuguese and Filipino – was the first Australian woman to be inducted into the Australian Songwriters Association Hall of Fame, a tribute to her more than 35-year music career. Last June during the Queen’s birthday honours awards, Kate was awarded an Order of Australia for her charitable work and services to the music industry. Look out for South African a capella group Africa Entsha on Friday and Saturday. Australian acts include Sol Nation and Cumbiamuffin with their Colombian sounds. The festival also welcomes Sonik Waves, Miriam Lieberman, C Major, the Justin Yap Band and Titian Payne and the Big Island Express and a range of much loved local acts.

The Festival’s free Friday nighty opening concert in Garema Place will feature headline performer Kate Ceberano along with Wiradjuri, Bollywood, Andrea Kirwin, Miriam Leiberman, The Borderers and Sol Nation. Along with this incredible line-up of entertainment, stallholders will be selling delicious food, drink and lots more for all to enjoy.

All up 13 showcases and performance areas will give festival spectators an opportunity to delve into the food and traditions of nations across the globe. Be sure to look out for:

Full details can be found at the #NMF2017 website.

The 2017 Festival sees the return of multicultural comedy with top comedian Anh Do’s The Happiest Refugee and Joe Avati’s Show Us Your Roots showing at The Canberra Theatre.

The variety of multicultural food available in Canberra this weekend is mind-boggling. As well as many exotic foods there are also standard carnival fare such as chips on a stick and dutch pancakes, both the subject of criticism from some street food connoisseurs who claim they should not be seen at such a festival. 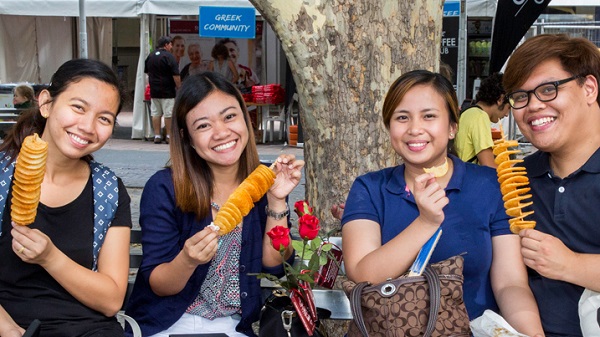 An article Calling for a ban on Dutch pancakes, chips on sticks at Multicultural Festival was one of the RiotACT’s most-read in 2016. Personally I don’t see what the culinary attraction is to chips on a stick but I know the kids love them, so who am I to judge?

In past years CBRfoodie designed and supplied a NMF Bingo sheet to help fellow foodies navigate and track their way through a weekend of food and drink. There’s no CBRfoodie bingo this year but you can find the old 2015 bingo sheet here. There’s even a version that ACT Labor put out last year, not as good as the original, but nice try.

In 2017 the footprint is even larger than past years, to include Bunda Street, spreading out the number of stalls  and by providing access to sanctuaries for those wishing to take a rest from the rush. The new sanctuaries – one specifically for children and parents, and the other for Canberrans of all ages and abilities – will offer a quiet space to retreat and a chance to enjoy the festival’s engaging performances and activities. The areas will provide respite with plenty of seating and shade.

The Children’s Sanctuary is located in Canberra Museum and Gallery near Civic Square, while the Sanctuary for all ages and abilities can be found in Petrie Plaza. In addition, to help beat the heat and ensure all festival attendees are well hydrated, we have partnered with ACT Smart and ACT Health to install cold water stations and bubblers in the festival footprint. Don’t forget to bring your recyclable water bottles to refill throughout the weekend.

Here are the essential bits you need to know:

PROGRAM – A copy of the #NMF2017 program is available online and also in this week’s edition of the free colour magazine The Canberra Weekly.

MAP – A map and list of stallholders is available online.

TRANSPORT – #NMF2017 is held in the heart of the Canberra city centre and is easily accessible. Parking is often limited, so other means of transportation to the Festival is recommended, such as Action Buses.

WEATHER – The Bureau of Meteorology is predicting a mixed bag this weekend, so best to check the BOM weather forecast on the day you plan to travel. Friday evening looks like the only day that will definitely be dry at this stage. The upside of attending when it rains is shorter queues and less pram jams!

Most importantly – have fun! Some of the culinary highlights in recent years included numerous foreign beers not regularly sold in Canberra, Loukoumades: deliciously Greek sweet made of golden balls of deep fried dough drizzled with honey, various barbecued meats and vegetables (often served on a stick), Too many different kinds of dumplings and more gozleme stalls than you can poke a stick at!

But it’s not just about the food. #NMF2017 will be, like it always is, a smorgasbord of music, dance, culture and entertainment. Take lots of photos and videos and share them on facebook, twitter and with the RiotACT! 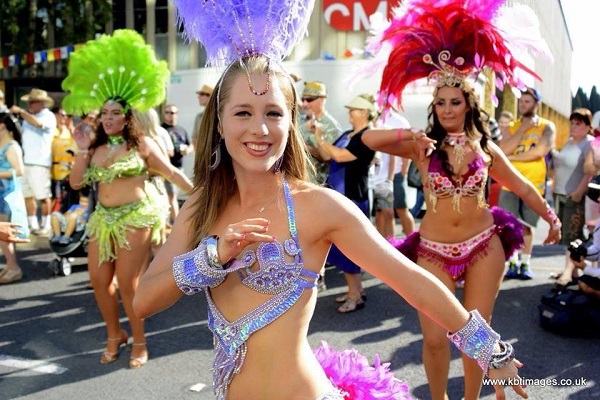 I should have also mentioned for all those interested in what other Canberra foodies recommend… (everyone knows Canberra is the foodie capital of Australia)? Canberra foodie Megan Sparke (@Girlhassparke on twitter) has collected some #NMF2017 food tips from Canberra food bloggers for National Multicultural Festival visitors which you can find here http://www.thegirlhassparke.com/2017/02/food-advice-multicultural-festival/

Glen Rothwell - 37 minutes ago
Amanda Lowman same reason they didn't support the banking royal commission. View
Daniel Duncan - 2 hours ago
by the end of the year we will find out View
Robyn Holder - 2 hours ago
Matthew Windebank there are rules. They were broken. Some recipients advertised grants months before they were announced when... View
News 93

Jeff Smith - 1 hour ago
Considering that the great walking city of Copenhagen's populated centre density would mean that we could fit double Canberra... View
Tammy Britt Welsh - 4 hours ago
Peter Mcleod and the alternative policies are?????? View
Joshua McTackett - 6 hours ago
Peter Mcleod the only part of that I agree with is that we need an ICAC. Every state and territory should, as well as the fed... View
Lifestyle 14

Anne Littley - 1 hour ago
Also Braidwood book fair is on View
Gary Fynmore - 22 hours ago
If outdoor pursuits is your thing I can highly recommend Braidwood Outdoors. Dare I say it but it's a fantastic 'man cave ' B... View
News 112

Andrew Ransom - 3 hours ago
Ian Gay R’Amen View
Frank Trapani - 4 hours ago
Morris Reinbear . Haha..didn't even think about it. Does it means that we are not all Australians ? But mixed up Heinz 57 of... View
Christie Horsfield - 4 hours ago
Kerstin Mahoney agreed ridiculous View
News 49

Jill Worrell - 6 hours ago
Sold our investment property for all those reasons...paid the final tax (capital gains) and will never go there again...1 les... View
News 47

Roderick Saunders - 16 hours ago
A.j. Knowlsy for residents of streets in Canberra that actually have footpaths .... 🤣 View
Property 1

Iaian Ross - 19 hours ago
About time. Was worried about that demolition ground that has been sitting like a ghost for so long after the crane was disma... View
Opinion 131

Jaanos Eesti - 19 hours ago
It means being thankful that Australia allowed my grandfather and mother to settle as refugees after WW2 and not wind up in S... View
show more show less
*Results are based on activity within last 7 days

Half the platypus population at Tidbinbilla Nature Reserve have had to be rescued from their disappearing ponds as the drought takes...
Opinion 28

A new 73-site caravan park near Exhibition Park will boost affordable tourist accommodation in the national capital and increase its...

@The_RiotACT @The_RiotACT
@BayldonAg is a #Queanbeyan success story thanks to its home-town loyalty & drive to support its customers + community https://t.co/vzKID9CBEo (14 minutes ago)

@The_RiotACT @The_RiotACT
The sports rorts affair signals a crisis in the principle of responsible government & the accountability at its core. Bridget McKenzie seems to have contracted the Trump 'deny everything' bug, says Ian Bushnell https://t.co/D7WPOVD55D (5 hours ago)