Where I End & You Begin – The Street Theatre (Review) 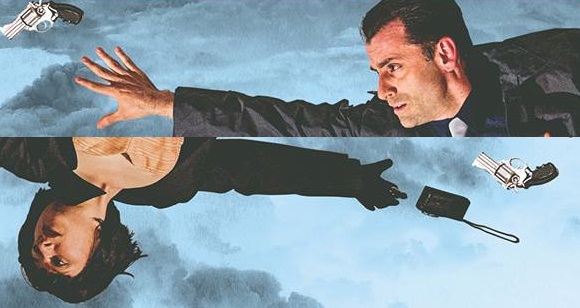 Deep space private detective Whatshisname (Raoul Craemer) is on a case: he has to find a missing woman. Unfortunately, he’s also lost his client, so before he can even get started on his case he needs to find the person who hired him. Meanwhile far more practical private detective Polly (Kate Hosking) is on a case of her own: astronaut candidate Timothy (Dylan van den Berg) has just met – and fallen in love with – actress Hazel (Ylaria Rogers). Tormented by mysterious blanks that have started to appear in his memory, Timothy hires Polly to tell him who he really is.

The twist here is that Whatshisname and Polly have their own stories that sometimes interact but never meet (except that they share the same mysterious servant Emmanuel, played by Kabu-Okai Davies). Like lovers sharing a bed Whatshisname and Polly compete for space – and the attention of the audience – until finally their mutual stories twine together in the revelation of a shared past.

Since I’d spoken to the writer (Cathy Petocz) I had a little insight into how to approach the show: I would sometimes have to make a choice and decide which story to focus on. Even so, it was hard to fight my instinct to follow everything. At the start I tried to absorb everything happening on stage and the result was that I was only getting fragments and having to do a more than comfortable amount of guesswork to piece together the story.

To get more of handle on things I decided to focus on Polly exclusively. However my timing was bad: Polly’s story began to slow down while Whatshisname’s began to heat up. I had to actively block out Whatshisname to follow Polly’s thread. After a while, I realised that the play in fact wanted me to be distracted by Whatshisname. At times we are supposed to be confused and struggling to make sense of the action and at other times we are supposed to focus on a specific point. It’s true that we are always free to decide what to focus on but frequently we are nudged into paying attention to something specific. When I realised this I was able to fall into the play’s rhythm and let the experience flow over me.

The approach is an interesting way of making the audience feel like the characters. Just as Timothy has blanks in his memory, I had blanks in my understanding of the show – not because I’d forgotten anything, but because I’d missed parts of the story. And like detectives Polly and Whatshisname I was constantly hunting for clues and trying to solve a mystery. For a lot of the play, I thought Timothy and Hazel were the past selves of Whatshisname and Polly, and it was only near the end of the play that I realised that I might be wrong. The characters and situations have been deliberately matched to the audience’s own experience of watching two plays sharing one space. The play demands a lot from the audience and no doubt some people will feel that it demands too much investment.

Fortunately the acting is first-rate, with movement in particular beautifully detailed and sculpted. The unusual structure of the play means that the performers rely on each other more than normal for the right cues to happen at the right moment, and the performance I saw had clockwork coordination and precision. Even better, the sci-fi setting and the flamboyance of the characters means that the actors have a lot of interesting actions to perform – for example, more than once a copy of the Canberra Times with eyeholes snipped in was used to snoop on a private conversation. The acting is vivid and alive.

The same can be said for the costumes and staging (design by Imogen Keen). This production has the best (and most daring) staging I’ve even seen at the Street Theatre. The audience sits on either side of the stage in a different take on theatre in the round. But some action also takes place behind the audience, so there were moments where I had to turn around to see what was unfolding behind me. I also had a clear view of the audience on the other side of the stage and at one point they (and we) were included in the action when masks were distributed for us all to wear during a key scene. Much like Heart of a Dog (which also premiered at The Street this year), the creative team is determined to squeeze as much creativity and variety into the show as they can – it felt like the kind of show you make when you’re not sure you’ll ever be able to make another one. Fortunately director Caroline Stacey keeps it all together and the spectacle of sight and sound is always engaging.

But ultimately this is a play that some people will love but others will struggle to enjoy. I admired the inventive staging and the quality of the performances but often had trouble putting the action taking place in context. But then again the play is deliberately and thoughtfully designed to confuse, so it can be said to succeed on its own terms. I did love the many striking and beautiful images in the play. The final image of the play is its best and one that I suspect the play will be remembered for. I won’t spoil it, but I will say that it does not take place on the stage. While I can’t give it a universal recommendation, “Where I End & You Begin” is demanding, beautiful, creative and ambitious – and worth seeing perhaps because there has never been anything quite like it.

When: 18 – 26 October
Where: The Street Theatre
Tickets: http://thestreet.org.au/?page=whereiendyoubegin

Tags the street theatre theatre review Where I End

Lin Van Oevelen - 16 minutes ago
I am still looking for a great pad thai on the Northside. One of those simple dishes that requires real skill to get right, I... View
Salima Haidary - 2 hours ago
Kinn Thai used to be good, sadly no more 😭 View
Elise Quodling - 4 hours ago
David Gray research? 😉 View
Opinion 53

@The_RiotACT @The_RiotACT
After a tough few weeks for the team at Mogo Wildlife Park, the surprise delivery of a leggy new addition was a treat for visitors & staff https://t.co/Pc3ECJmQgp (45 minutes ago)