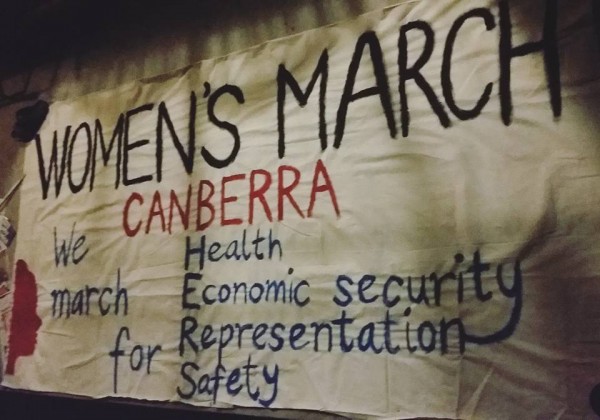 Last weekend several hundred Canberra-based women and men joined hundreds of thousands of others around the world to participate in the March on Washington women’s marches. This was grassroots initiative, organised as an opportunity to stand in solidarity with women in America who are questioning what Donald Trump’s presidency means for women’s rights and empowerment.

Some may wonder what the point of this gesture is given the fact that this was in large part a reaction against the United States’ President’s views about women which may not have any immediate impact on us here. Speaking to women who attended, however, I found that like me, many viewed the action as important, providing an opportunity to stand up against sexism, reaffirm our commitment to equality and be part of something bigger than ourselves.

Standing in solidarity is important. For the women I spoke to about why they marched, this was a key reason for getting involved. They recognise how lucky we are to live in this progressive community that works hard to promote and protect the human rights of all people and wanted others to know that the women of Canberra cared about what was happening in the world. One participant noted that standing in solidarity is empowering as it makes us realise that there are others who care about the things we do and we are not alone.

Supporting young women as they make their way in the world matters. Many of the speakers at the Canberra event were young women, who are deeply affected emotionally by the devaluing of their roles and capacity by someone in a position of extreme power and influence. A mother who attended the event with her young daughter spoke of wanting her daughter to know that she belonged to a community that did care about women.

Sexism must be called out. It matters that the President of the United States has a record of sexist comments and behaviours. One participant noted that respect should be unconditional but we know that women’s ambitions to lead are often mocked and our basic right to be agents of our own lives and bodies is at risk. The US President has already stated that he will work to remove American women’s reproductive rights and this sends a message to all women that we cannot be complacent about the rights we have already won through hard fought battles by us and the women who have gone before us.

Global events provide an opportunity to reflect what we need to do closer to home. Speakers at the Canberra march highlighted the work that needs to be done to make our community a more equitable one – from removing institutional discrimination, to addressing the gender pay gap which is getting worse, to dealing with violence against women that affects one in three women in their lifetime and working to improve rights for the LGBTIQ community.

Importantly, participation in these events give us energy and inspiration. Participants noted that they saw this as a chance to reaffirm their commitment, speak out and be counted. This action is a beginning, and not an end. It is exciting to think about what personal commitment each person who attended the march will make around creating equality in our local, national and global community.

What do you think? Do you think that the Canberra march is a useful event or a waste of time?

Pictured above is a banner from the Canberra march. Photo: Women’s March Canberra Facebook page

had I known about it before hand this old woman would have walked proudly with these women….
to those who think because of this new President that previous Presidents transgressions will be forgotten I say none should be forgotten or forgiven… it is unacceptable from anyone, of any level in society. People need to be able to be safe, men , women and children ….
I would like my grandchildren to feel safe, the women in my family to be safe and cant understand men who do not support the safety of the women in their lives and who bring it down to whinging over a political issue.
If you can not support the women in your life and use the excuse that it is whinging due to a political loss then what sort of man does this make you. It makes you a man who is willing to allow their wife, mother sister or daughter to be assaulted while you stand there making excuses for the perpetrator.

I guess all the march can have been is an admonishment of all the women in America who thought Hillary was home and hosed, and didn’t turn out to vote.

“Some may wonder what the point of this gesture is given the fact that this was in large part a reaction against the United States’ President’s views about women which may not have any immediate impact on us here. Speaking to women who attended, however, I found that like me, many viewed the action as important, providing an opportunity to stand up against sexism, reaffirm our commitment to equality and be part of something bigger than ourselves.”

Yes, this reminds me of 1998 when it was revealed President Bill Clinton made advances on an impressionable young intern. I don’t think it’s in dispute that he grabbed her on – well let’s just say he grabbed her in the Oval office of all places. As I recall, feminists took to the streets in their hundreds of thousands to protest his predatory behaviour. Right?

If Canberrans are energised and empowered by participating then why not!? However, as a protest against Trump it seemed too little, too late. Speeches and images from the US march went viral – but all too late in a country where over 92 million people did not vote.

When is the march for women in the rest of the world?

Canberra Women’s Shed powering ahead with tools of their trade