Why did organisers allow a Right to Life stall at the Multicultural Festival? 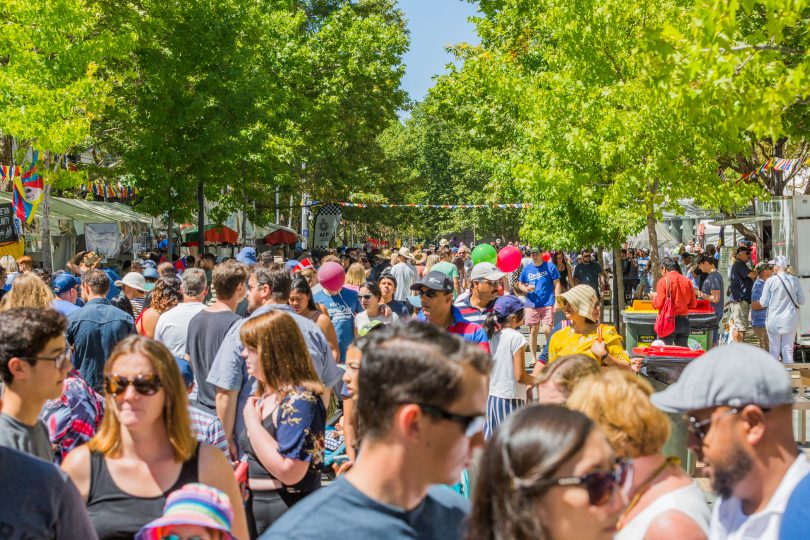 The ACT Right to Life stall at the Multicultural Festival that showed a model of foetuses in the womb at different stages of development and photos of an unborn baby’s feet is causing a stir in the local community, provoking a petition for the ACT government to ban the organisation from the event.

The petition, which was started by Jess Chalker, said the ACT Government should ban this organisation and all anti-abortion organisations from the festival.

“Every year the national multicultural festival is held in Canberra. It’s an amazing weekend of celebration. Unfortunately for the past few years, the ACT Right to Life Association has been able to have a stall,” the petition reads.

“Not only is this not a culture, but it’s also a group that actively targets women and the right to make choices for their own body.”

The petition so far has received more than 650 signatures.

A stall showing the benefits of keeping a child seems an odd fit for a festival celebrating the many cultures prevalent within the nation’s capital.

According to the 2019 terms and conditions for festival stallholders, display materials must be sensitive to the diversity of community members attending the event. The T&Cs also states that organisers have the right to remove any content they deem offensive.

ACT Right to Life Association president Bev Cains said the organisation had a stall at the festival for nearly 40 years and had paid the festival $150 to have the stall on Sunday.

Mrs Cains said the organisation would have the same stall next year and if organisers removed them from the festival, they would take them to the Administrative Appeals Tribunal.

“If they try to block us from the Festival, we will take them to the Tribunal because we fit all the criteria and because of our long-standing acquaintance with the public,” Mrs Cains said. “We pay the exact same $150 as everybody else has been paying the last couple of years.”

When Region Media approached the Festival organisers for an explanation and queried if organisers had deemed the stall content inoffensive, an ACT Government spokesperson said no stalls at the Multicultural Festival receive any endorsement from the government.

“These stalls ensure members of the community have the capacity to provide information on their community organisation,” the spokesperson said.

“It is important to note that there is no endorsement by the ACT Government of particular stalls or particular information presented during the Festival.

“Following the Festival each year, we listen carefully to feedback from stakeholders including festival goers, stallholders, community organisations, showcase coordinators, and ACT Government agencies. This feedback helps to shape the planning for future Festivals.”

5 Responses to Why did organisers allow a Right to Life stall at the Multicultural Festival?
Filter
Showing only Website comments

The stall is beautiful and children love to see the models of the babies. I’ve seen three generations of a family look at this stall in wonder at how they all began their life. There is nothing offensive in new life. It is amazing! I wonder how many of those having hugely negative reactions to the stall have ever actually seen it? I’m sorry if you have been hurt by abortion. Thankfully for you, you were allowed to live. Pregnancy is avoidable. New life shouldn’t be destroyed. Abortion not only kills babies – it hurts mothers and fathers too.

Let’s be honest, people aren’t mad about this because it “doesn’t belong” in this type of event, because it’s “political” or because it somehow “endangers women”, they’re mad because this stall doesn’t align with their personal political beliefs. A culture which is afraid of different and unique opinion isn’t cultured at all. This is a classic example of a dominant political population oppressing and discriminating people because they’re scared of them. There is absolutely no reason this stall should be removed. It would set a dangerous precedent that certain minority groups aren’t allowed to express their opinion. In case it wasn’t obvious, this is what’s known as dystopia.

They have every right to express and illustrate their views. I’m pro (early) abortion and wouldn’t be swayed by images because my position on abortion is definite. If right-to-lifers find fertile ground for (respectful) messaging, so be it.

Jess should go back to high school so she can learn that in a democracy you can’t simply ban stuff that you disagree with.

On the other hand surely the organisers of the festival have a range or parameter of the type of stalls that they want at such a festival. Presumably you wouldn’t want stalls promoting hunting or adult entertainment or extremist groups at a Multicultural festival.

So basically Jess Chalker saw a stall pushing views she doesn’t agree with and she wants it banned?

@The_RiotACT @The_RiotACT
More than 1000 Canberrans across six suburbs have been given the opportunity to change the look of their streets as part of a pilot forestry program. What trees would you like to see planted? https://t.co/dP9eU2Q2hq (44 minutes ago)

@The_RiotACT @The_RiotACT
The eight-year legal saga involving Witness K, which shed light on Australia's bugging of Timor Leste in 2004, has come to an end with the former spy sentenced in Canberra yesterday https://t.co/yIT4TW8TlT (54 minutes ago)