why industry self regulation fails

As soon as I saw this I knew that some Neil from the young ones dogooder had mounted the pony for a quixotic quest. 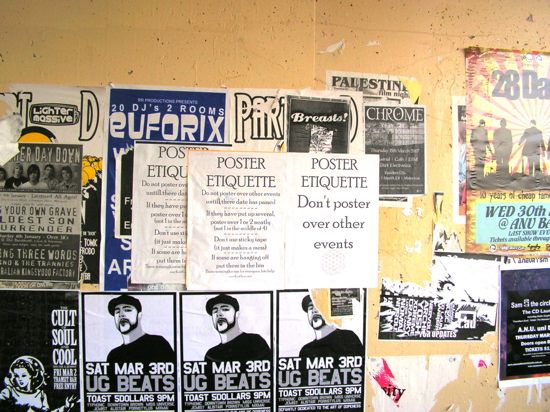 Obviously the rampant bandpostering had just been getting out of hand. They probably thought ‘how will my emo band get some publicity if someone else keeps putting posters over MY posters? – We can all share and win if we just follow some basic rules – which I will make up because i am a dogooder, and a prefect at high school’.

Of course walking on this earth as long as I have, i knew that this was doomed to failure. I took a photo, waiting for the inevitable response from the dogooders competitor.

A textbook case of why industry self regulation fails. Not all of the dogooders competitors want to play by the rules – what rules they say. Its not like they follow any of the other rules, enshrined in legislations, such as not defacing private property with their unwanted visual pollution.

i am particularly amused that the ‘rules’ were targeted for over postering so specifically.

We used to use the poster boards to advertise our latest production until it became an obvious complete waste of time.

The last effort had us in Civic at 2:00 am, placing posters on the poster barrels. We even brought in a ladder and took the highest position available. By 8:00 am, they were covered by some random band/event/whatever.

We now only print up enough to cover specific locations/shops etc who we ask can we place the poster in the window.

I think it’s only fair though.. if you are going to stick up a poster of your event, in public property, it’s only reasonable to expect that it’ll be allowed to be seen until the event.
By the same token, you shouldn’t poster over someone else’s.

noticing of course these flyers are posted over other events posters… hmmm….

No one may post after me until after I give permission.

After you have my permission, please only make one post. If you cannot think of everything you want to say, please refrain from posting altogether.

There are heaps up these up around the ANU.

I chuckled when I first noticed them.

[in the mix link]

Karan Campbell-Davis - 2 hours ago
That's right, build more of those ugly, high density dog boxes, just like Sydney! 🙄 View
William Coats - 11 hours ago
what impact will further development in the Sullivans Creek catchment have on future flooding in Oconner and Lyneham. These a... View
Community 5

Donna Ainge - 10 hours ago
Hi Julie-Anne. Where in O’Connor did you live? Hakea Cres by any chance? View
Dot Willcoxson - 13 hours ago
Suzanne Huntley Doug has posted a comment further down. The neighbour he refers to was Frank Machutta who lived across the ro... View
Doug Willcoxson - 13 hours ago
A neighbour of ours in Pearce was on his way home that night and was behind the cars that were washed away. He was passed the... View
News 13

Zakzook Chico - 10 hours ago
Patrick J Pentony couldn’t agree more View
William Coats - 10 hours ago
So after 20 years this Labor Greens Government is ready to promise action. I guess we will have to wait and see. View
Patrick J Pentony - 11 hours ago
Rheyce Spears we are at the start of the twentieth year of labor greens gov in the ACT. Not sure you can really blame anyone... View
Opinion 3

Ash David - 19 hours ago
Poor roads (Monaro Hwy especially), rubbish not collected for weeks, grass over a metre tall on the side of our roads. I have... View
show more show less
*Results are based on activity within last 7 days

@The_RiotACT @The_RiotACT
The ACT is expanding vaccine storage facilities at the Canberra Hospital in preparation for the arrival of the Pfizer COVID-19 vaccine https://t.co/sJOTHW08De (13 hours ago)