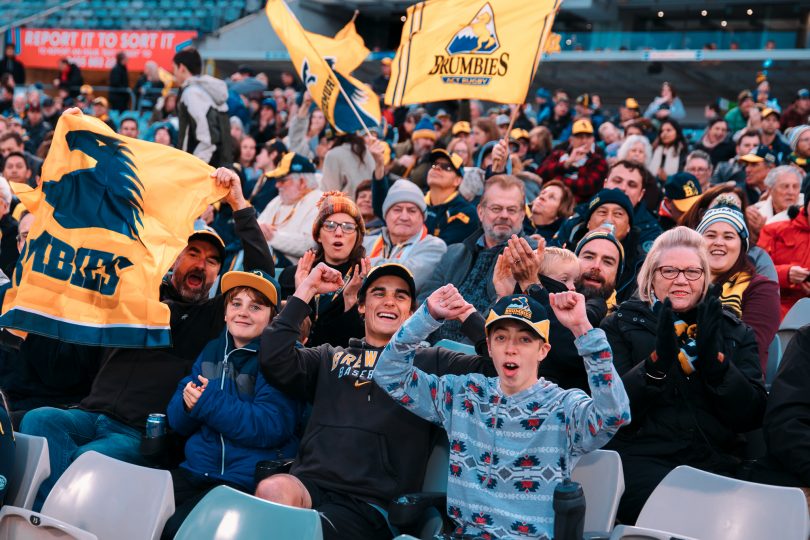 The question remains whether Brumbies fans will support the Raiders and vice versa. Photo: File.

Next year’s double-header at Eden Park in Auckland has the potential to be a great sporting social experiment.

The possibility of such an event has been talked about for some years but it always fell short for a number of reasons, not the least being the self-interest of the respective codes. But it appears times have changed in the quest to widen the appeal between respective fan bases.

The double-header will see the Raiders play the New Zealand Warriors in round two of the NRL at 3:00 pm, followed by the Brumbies taking on the Auckland Blues in round eight of Super Rugby at 5:35 pm, at the same ground on the same day.

This is a unique occasion.

It wouldn’t have been possible a few years ago because of sponsorship painted onto the ground and each code have different naming-rights sponsors. But times have changed with the ability now to super-impose sponsors through the television coverage, eliminating the need to paint promotions onto the playing surface.

The next is the different line markings, with the need to change from rugby league to rugby union in the space of half an hour.

By far the most intriguing aspect of this double-header though, is whether die-hard Raiders fans will stay to watch the Brumbies and will die-hard Brumbies fans get to the ground two-and-a-half hours early to watch the Raiders?

The same questions no doubt will be raised in relation to Warriors and Blues fans.

If it is a success, could it be emulated at Canberra Stadium?

A number of years ago I would have said no, but there appears to be a united front at the moment with the Raiders and Brumbies cohesive in their quest to have a new stadium built in the city.

I say it wouldn’t have been possible a number of years ago because there was, at times, behind-the-scenes animosity. This didn’t necessarily reach the surface but there was a sense of underlying tension between these two codes within our city.

The success of the Brumbies as the Super League war raged was a particularly unsettling time but there is now a spirit of co-operation between the two teams.

Another aspect worth exploring is the financial benefit of staging both codes on the one day at Canberra Stadium. Surely the ground hire would be far cheaper than if you were hiring it on consecutive days?

As a supporter of both the Raiders and the Brumbies, I would love to see this concept work.

You just need to organise your passports 🤪🤪

Ol L - 15 hours ago
Maybe if we do nothing another government will be in power when it all blows up, so let’s do nothing in the meantime View
Ashley Wright - 16 hours ago
Sally Greenaway found the article. https://www.cityservices.act.gov.au/roads-and-paths/traffic/trafficsignals/drakeford_drive... View
Ashley Wright - 16 hours ago
Sally Greenaway as I said above they actually do that and have done so for a good 30 years. They use a system called SCATs th... View
show more show less
*Results are based on activity within last 7 days