Why we need to tackle poker machines 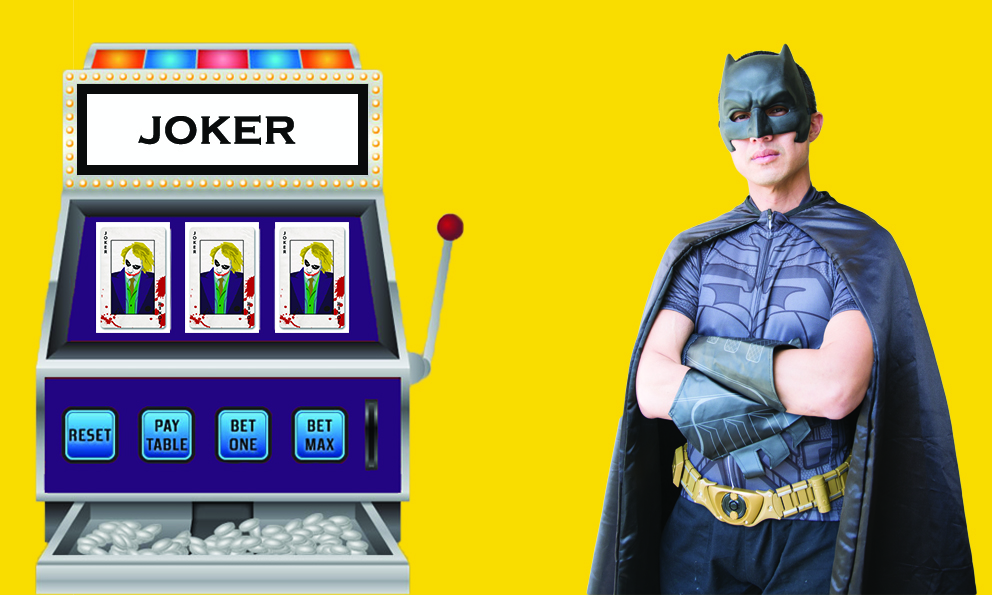 Kim Huynh, Belco’s Batman faces off against the Poker Machine

For a long time I casually played the pokies without realizing the extent to which they’re ripping the soul out of the nation’s capital.

In financial year 2014/2015, Canberrans lost over $167 million on poker machines. We fed over $2 billion into pokies, that’s almost twice as much as the ACT Government spent on Education in 2015/16. It’s estimated that 28 per cent of that income came from problem gambling.

Pokies are responsible for 75-80% of problem gambling, which is directly related to a series of other social ills. So if you’re concerned about crime, mental health, poverty and families, then you should also be deeply concerned about poker machines.

Polls suggest that 80% of Australians support poker machine reform. Most of us recognize that they magnify misery and inequality and take far more from the community than they give.

Rather than cooperate to address this persistent problem, poker machine advocates put forward three arguments for doing nothing.

1. Most poker machine users don’t have a problem

Of the tens of thousands of people who play poker machines regularly in the ACT, only a small fraction have a gambling problem. The majority of players should not be penalized because of an irresponsible minority.

The first response to this argument is that the ACT Gambling and Racing Commission advocate a public health approach to gambling harms, whereby addicts are not viewed as lacking character, but rather suffering from an illness that’s caused by a mix of social and personal factors.

Moreover, pokies are designed to draw people in and keep them playing for as long as possible. The lack of transparency over exactly how this is achieved has led Nick Xenophon, Andrew Wilkie and Larissa Waters to call for more intelligence from inside the poker machine industry. Their hope is that this Pokie-Leaks initiative will give us a better sense of how pokies make us feel like we’re on the verge of winning while ensuring that we rarely do. In short, ‘Don’t just blame the victim.’

The second response to this argument goes to the actual figures. The ANU’s Centre for Gambling Research found that approximately 4,700 Canberrans have a significant or severe gambling problem, 75% of whom play poker machines. On average 1 out of 6 players at any point in time are problem gamblers.

It’s also well known that gambling harms are not isolated. Seven to ten people are affected by each case of problem gambling. Family members commonly report not only the loss of income, but also the associated deterioration of relationships through stress, lies, anger, theft and violence.

2. The income from poker machines supports clubs which in turn support the community

ACT clubs contribute $11 million to sporting and community activities. When our clubs suffer, so too do many of our teams and events. Clubs also contribute intangible benefits to the community. They embody our culture and history and provide a space for people to get together and recreate.

The question however is, ‘Are you comfortable knowing that a significant proportion of that sponsorship and service is derived from addiction and misery?’ If the answer is ‘no’ then we should look for healthier forms of funding. Moreover, if we offset those forms of income against the broader costs of gambling-related harms, poker machine reform makes not only moral sense, but also good socio-economic sense.

3. Poker machines are the lesser evil

According to former Gaming Minister Joy Burch, “There is a growing issue with online gambling. You go into a racecourse, you go into a community club you’re surrounded by people, there are people there that if you display a level of need they can tap you on the shoulder and point you in the right direction,” she said. “But online gambling, anyone with a smart device, a smart phone sitting on the bus, or a phone by themselves at 3 o’clock in the morning, can expose themselves to their gambling problems and I think that is a real risk.’

While online gambling is rising, it remains a very small proportion of overall gaming spending. It’s impossible to address problem gambling without addressing the largest method of gaming in the ACT: poker machines in clubs.

So what should we do?

Drawing upon recent research from the ANU Centre for Gambling Research, there are three important points to recognize when it comes to reducing new incidences of problem gambling and tackling existing ones.

The ACT can take the lead in terms of poker machine reform because there are only around 59 venues rather than the thousands in NSW.

Pokies reform needs to be undertaken with and not against clubs. Some clubs have made moves to provide additional support services to mitigate problem gambling and the oldest club in Canberra, The Burns Club, has been proactive in moving away from relying on poker machine losses for income.

The government needs to support such clubs by providing them with rates reductions and rebates. Moreover, a poker machine reduction fund should be established to help venues transition away from poker machine income. In addition, we in the community should vote with our feet and wallets and frequent venues that, with good faith and effect, strive to eliminate gambling harms. This will reinforce the message that gambling addiction is a public health issue that we all need to confront.

With club support, I propose three levels of possible action that should be undertaken across the board, regardless of whether the venue is a club or casino, and independent of its size or political affiliations.

Hopefully, only the first level will be necessary to address problem gambling, which is why monitoring and research is so important. However, the scope and persistence of the problem means that we must discuss and consider all measures from the outset. It’s also important that we promote measures that not only minimize harm, but also offer attractive and compelling pathways to eradicate and prevent problem gambling.

Canberra can and should lead the country when it comes to poker machine reform. Everyone is making the right noises. But to paraphrase the Dark Knight, ‘It’s what we do that defines us.’

Stay tuned for a follow up article with more details on possible solutions.

Kim Huynh is a RiotACT columnist and is also running as an independent for Ginninderra in the ACT election. Check him out on Facebook at gokimbo or GoKimbo.com.au

You forgot the most important question: Where does the money go?

Kim, as an independent, you are in a unique position to take a stand on an issue and be neither beholden to a party’s point of view, or accused of political motivation.
I realise you may want to retain objectivity, but sometimes the objective facts will tend to make one side look worse than the other.

I’m surprised that in an article of this length and detail you didn’t discuss the real addiction that is in play.

Jason Malcolm - 5 hours ago
Natalie you'll be fine!!! View
Gaby Langhorn - 5 hours ago
Denise Wilson could be good for you. View
News 47

Scottie Roberto Avelia - 5 hours ago
Hardly zero emissions when you consider the lifecycle (which the Earth does)... These lying claims make morons feel good but... View
Food & Wine 20

Gabriel Spacca - 6 hours ago
Pretty sure he is not the target demographic for TikTok. View
Larry Appley - 6 hours ago
A publicity stunt from a former radio announcer? Who would have thunk? View
Nathan Lofthouse - 7 hours ago
Why is it the tinfoilhat mob always say 'do some research' I don't need to research tiktok. its tiktok. I expect everything o... View
Property 25

Lori J Tas - 7 hours ago
Sue Ellen since more people live there now, that really disproves your opinion that it's oldness was the appeal 🤨 the new... View
show more show less
*Results are based on activity within last 7 days

Residents who live near the site of Geocon's proposed six to eight-storey apartment block in Kingston fear it will destroy...
News 20

Residents who live near the site of Geocon's proposed six to eight-storey apartment block in Kingston fear it will destroy...
News 20

@The_RiotACT @The_RiotACT
Just days from the Eden-Monaro by-election, what is motivating voters? Region Media’s journalists asked people across the electorate about the issues that would sway their votes https://t.co/KPzWiwk20n (5 hours ago)

@The_RiotACT @The_RiotACT
@NatGalleryAus is having a mega-clearance sale and it's your chance to pick up memorabilia from great NGA exhibitions as well as spectacular pieces from local artists https://t.co/iA3TbWyTff (6 hours ago)

@The_RiotACT @The_RiotACT
There’s something to suit everyone in our top picks of things to do this weekend, from music to dance to trivia to gardening https://t.co/MhJpvE9Igk (7 hours ago)