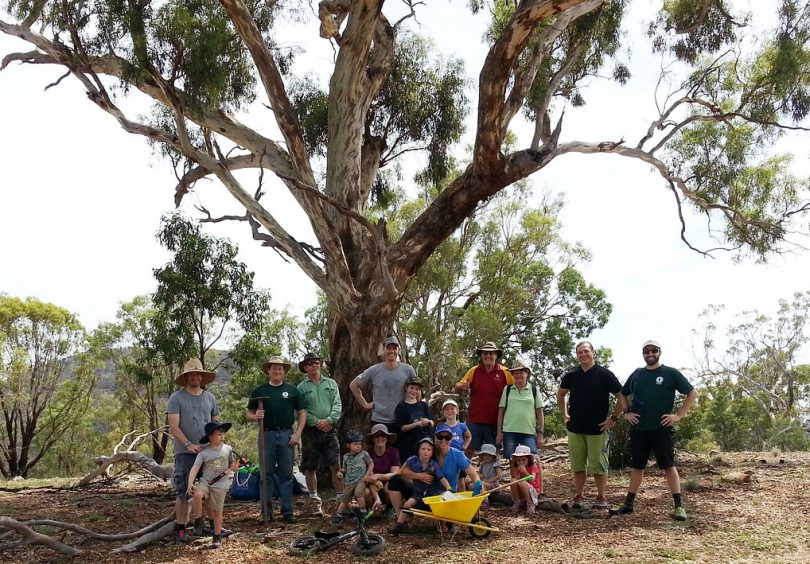 A mulching crew during a recent clean-up at Mt Majura. Photo: Friends of Mt Majura.

An area near Mount Majura nature reserve has been protected from future development after the ACT Legislative Assembly passed a resolution put forward by the ACT Greens.

The area east of Antill Street in Watson had been zoned to allow for leisure and accommodation, but the motion, passed Thursday prevents that from occurring.

ACT Greens leader and environment spokesperson Shane Rattenbury said the passing of the resolution will improve protections for Canberra’s endangered woodlands and its biodiversity.

“This part of Watson woodlands was not protected when Mt Majura and Mt Ainslie were gazetted as a nature reserve,” Mr Rattenbury said.

The resolution now requires the ACT Government to assess this part of Watson’s endangered Yellow Box-Blakely’s Red Gum Woodland for rezoning and addition to the Canberra Nature Park.

“This is not the place we want to see buildings like hotels springing up,” Mr Rattenbury said.

“We need to ensure that developments respect local communities and protect Canberra’s unique and precious environment.

“Once these precious woodlands are gone, they’re gone for good.” 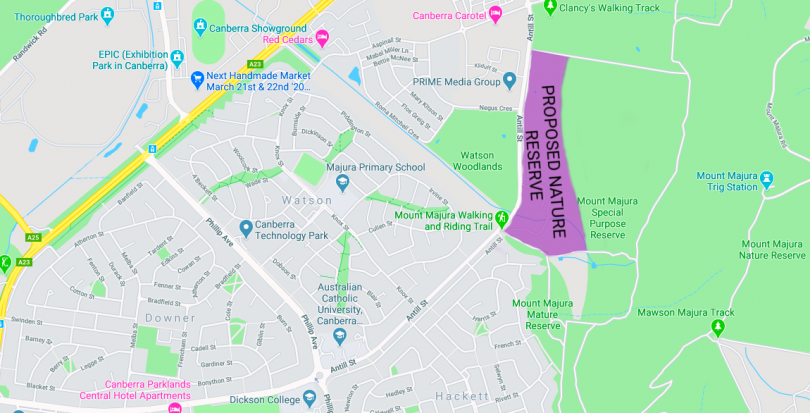 The ACT’s Yellow Box-Blakely’s Red Gum Woodland at Mt Majura is one of many listed as a critically endangered ecological community.

It is also home to a variety of rare and threatened species including vulnerable birds and lizards, such as the superb parrot and glossy black cockatoo.

The Molonglo Conservation Group’s executive officer, Janelle Dennis, told Region Media there had also been sightings at Watson and Downer during summer of the regent honeyeater bird, which is listed as critically endangered nationally.

“We think this motion being passed is great news as it’s important to protect that area of land, at least as a buffer for other woodlands,” Ms Dennis said.

“The ACT is a stronghold of box gum woodland in Australia, so it’s important we do this, not just with a local focus, as this is nationally significant as well.

“We tend to offset areas for development where there is degraded habitat, so to focus conservation on places that are in good health and also connected to another reserve is a much better way forward.”

Mr Rattenbury said the proposed nature reserve will be similar to those at Mulligans Flat, Goorooyarroo, the lower slopes of Mount Ainslie, Callum Brae, Kinlyside and Dunlop.

“Sadly, so much of the ACT’s woodlands have already been removed for development or other infrastructure. The Greens have acted today to protect more of what is left,” he said.

“The protection of these precious woodlands is a step in the right direction.

“The blocks in question need to be incorporated into the Mount Majura Nature Reserve to ensure the integrity of the reserve and prevent ‘edge effect’, which particularly risks the introduction of predators such as domestic cats.

“Given that yellow box woodlands have already largely been cleared for housing and other infrastructure, it’s crucial that we protect these remaining areas for their ecological value and the enjoyment of all Canberrans.”

Ms Dennis said while there is more that can be done to protect the ACT’s woodland areas, more resources are needed especially following the recent bushfires that burnt large areas of the Territory.

“We need to look at what has happened at Namadgi National Park and also over the border to really see what we’ve got left and really focus on maintaining the health of these places.

“The fire that went through to Oaks Estate also went through an ACT box gum woodland and we suspect there’s going to be a pretty massive regrowth of weeds in there now because of the rain we’ve just had.”

The Government will report back to the Assembly on the rezoning of the Mount Majura nature reserve in August this year.

Hope we can rehabilitate that place too

So looks like it covers the area containing the Hackett government horse paddocks, the government Pound holding paddock, the Ted Noffs Foundation, and the small private farm 🤔

Coral Alexander - 11 minutes ago
Charlotte Ellen yuuus as if you could miss it. Paola Leon you in?... View
Caroline Le Couteur - 2 hours ago
Please don't release a heap of plastic rubbish. We have enough problems.... View
Tracy Parker - 3 hours ago
Perth do a duck derby every year where around 15000 are released, they re use them and collect them all at the end of the eve... View
Sport 19

Dave Horsley - 13 minutes ago
How would a club like Penrith convince quality players to travel 6+ hours every week plus training when they could just join... View
Sione Nonehh Taufui - 32 minutes ago
Sione Taufui ouaaa 😂😂😂 party party... View
News 238

Lucy Doan - 14 minutes ago
Pls plant trees like those in inner North or inner South, do not convert new suburbs into Belconnen-style please! View
Jarrad Job - 2 hours ago
Doug Hovi Have to replace all the trees they cut down to make room for all the solar farms in the future🤣... View
Robert Woodrow - 3 hours ago
Tahlia Bruce or possibly not .... View
Opinion 47

Troy Scott - 1 hour ago
I think I will boogs I was pretty good at it at 7 View
Steve Hugler - 4 hours ago
Troy Scott there’s still time for you to make a shot put comeback mate. 3 years and you could be at the Olympics!... View
Liam Timothy-Nesbitt - 6 hours ago
Tariku Fitzgerald-Holmes We’re up there... View
Lifestyle 30

Dilkera - 4 hours ago
Absolutely ludicrous to have a grand drive in entrance on Canberra Avenue, which is long past being a grand avenue. It is a c... View
News 35